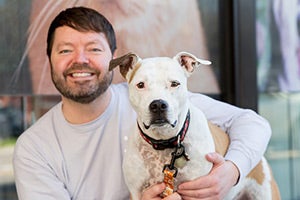 Arlyn Bradshaw serves as senior advisor for community relations in the Office of the CEO for Best Friends. Previously, he held the position of Mountain West regional director, coordinating lifesaving collaboration across the eight states of the Mountain West area.

Arlyn is an alumnus of the University of Utah, holding a B.A. in political science and a master's degree in public administration. Before coming to Best Friends, he worked at the University of Utah as the assistant dean of Students. Originally from rural Idaho, Arlyn has been active in Utah politics and the University of Utah community for more than a decade. He currently lives in Salt Lake City with his partner, Neil Webster. They have three rescued pit bull terriers, Bella, Atticus and Brass, and a dachshund named Roderick.