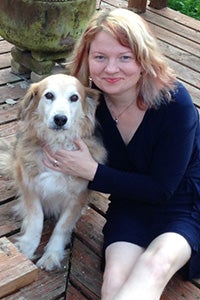 Elizabeth Doyle is the senior writing mentor and style editor for Best Friends Animal Society.  She coaches writing and verbiage across the organization and beyond.

She's studied Development Communications at Harvard University, and three of her Best Friends fundraising appeals have won gold Maxi Awards from the Direct Marketing Association of Washington. Two took silver in 2017 and 2018.

Originally an historical romance novelist from Austin, Texas, Elizabeth had seven books published in three languages, and consequently knows more about pirate ships than most pirates do.  She was a part of Austin Pets Alive when it first formed in the 1990s, and ran the No-Kill Handbill daily for several years before heading to Best Friends, where she has now worked for over 17 years.