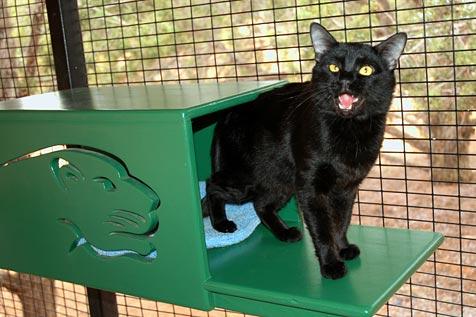 On the odd chance that somebody would make some unlucky black cat wear a witch hat and spend an evening cramped inside a pumpkin as part of a Halloween decoration motif, Best Friends doesn’t usually push black cats for adoption right before Halloween. There probably isn’t a big risk, but it’s better to play it safe. However, a much better benefit comes from holding off -- the annual Black Is Beautiful adoption event that happens shortly after the spooky holiday!

That’s right: It’s all black cats all the time at the Black Is Beautiful event. Black balloons for decorations and everything. This year, the event was held in Las Vegas, where four black cats found families.

Ozzie, one of the lucky cats, who looks like a mini black panther, came to Best Friends just a few months ago and wasted no time before wrapping himself around every little finger of every hand that reached down to pet him. One of his favorite ways to pass the time was perching on the shoulders of various caregivers. You haven’t lived until you’ve had a gorgeous black cat ride around on your shoulders like an overgrown parakeet! Ozzie razzle-dazzled his visitors at the Black Is Beautiful event - his first adoption event - and found a great home right there in Vegas. His new family says he’s in charge now, and they wouldn’t have it any other way.

And no worries, everyone, all the adoptive families involved are fully aware these gorgeous cats are not to be used as holiday accessories at the end of next October!