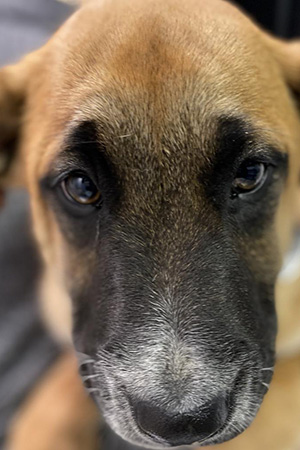 Change sure can be stressful ― and not just for people, but for pets, too. For a dog named Charlie, change can be particularly stressful, and when he came to Best Friends in Utah, he showed it by being standoffish and nervous. Treats helped, but only so much.

It didn’t take long for the team to see that when it came to helping Charlie relax, they had their work cut out for them. Linnea Scott, Best Friends lifesaving and care specialist in Salt Lake City, was one of the first to experience Charlie’s tentative demeanor. “He let me sit with him in the room but after I left, he quickly realized what was going on. Within an hour, he was low growling, barking and lunging towards the door if anyone came near,” she says.

At first, Linnea and others on the team weren’t even able to walk Charlie because of his anxiety. In fact, they couldn’t even leash him up, so in order to move him while they cleaned his kennel, they had to entice him with chicken and other healthy treats.

Getting creative to help a shy dog

Eager to find an easier solution to moving Charlie without adding to his angst, Linnea and another team member got creative. By rigging ropes and pulleys attached to his crate door, they were able to close it from a distance and clean the room without moving him from his place of comfort. This system allowed Charlie to become more comfortable with everyone and he even started taking treats from Linnea’s hand.

Eventually, Charlie came to realize he was in a safe place at Best Friends, but getting him to leave his room was still an obstacle. Hoping to offer a role model, the team introduced Charlie to another dog on leash, and to their surprise found that he loved other dogs.

With another dog on hand, they were able to place a slip-lead over Charlie’s head and get him outside. But even that was a struggle because he was startled by everything outside of the building and became easily overstimulated.

Despite his shyness, staff was encouraged by Charlie’s progress and his personality started to peek through. Linnea says, “He loved to greet the handful of us he trusted as soon as we entered the room with lots and lots of kisses.” Charlie was now ready to move into a loving foster home and continue his transformation. 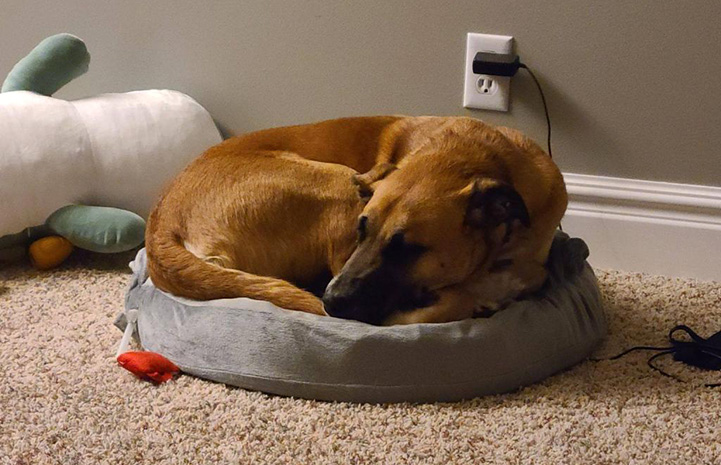 Foster volunteer Nikki Boehmer learned about Charlie while she was dropping off supplies at the lifesaving center. No stranger to helping dogs with behavior challenges, Nikki and her boyfriend, Dan, had recently recorded a foster win with Stilts, another high-energy dog like Charlie.

Considering their desire to foster again and Charlie’s comfort level with other dogs, Nikki and Dan discussed bringing Charlie home, but Stilts needed to give his approval first. If all went well, Stilts could be the mentor who allowed Charlie’s confidence to grow, especially on walks.

The meet-and-greet with Stilts was a success. With Stilts on board, the only thing left to do was bring Charlie home and begin the foster journey.

Charlie settled in with Stilts showing him the ropes. At first, any noise would startle him but it didn’t take long for Charlie to ace leash walking, sleep crate-free and even learn to use the dog door. In fact, Charlie made so much progress on walks that he began comforting Stilts when something upset him.

Nikki and Dan’s deck and yard quickly became Charlie’s favorite places to assert his independence, soak up the sun, disperse his beloved squeaky toys, and play with his big brother and the neighbor’s dogs (through the fence).

Charlie spent part of his days running the plush indoor toys outside, interrupting Nikki on work Zoom calls with the squeakiest toys and vying for her attention. Ignoring his large dog status, he preferred to be a lap dog (if he could get at least partially on someone’s lap) offering affection through nose boops and licks. Nikki says, “He’s one of the goofiest dogs we have ever met. He’s so animated!”

Charlie was blossoming and Nikki and Dan were feeling the love for him growing stronger by the day. The longer he stayed, the more they couldn’t imagine life without him. Charlie seemed to feel the same way. “He got comfortable really quickly and we had a feeling he wouldn’t be going anywhere,” says Nikki, fully aware that taking on a second dog permanently was a big commitment. What she didn’t know was that Dan was way ahead of her. 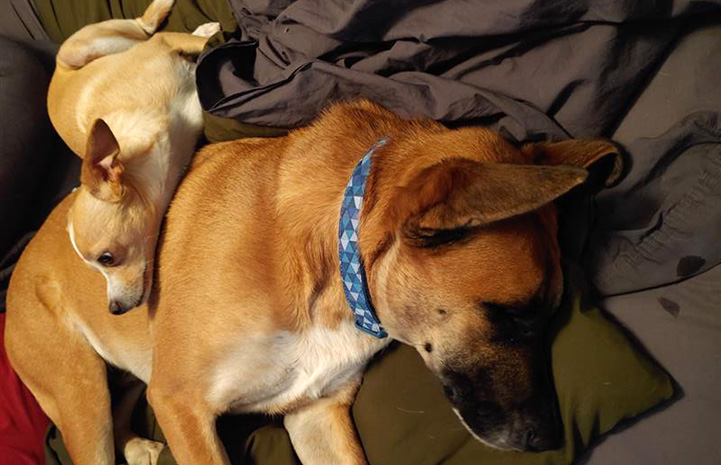 Dan had been planning a surprise for Nikki’s birthday and had the perfect present in mind: adopting Charlie. When he shared his idea with Linnea, she knew just the way to make the surprise happen. Having previously participated in a fake virtual meet-and-greet as part of a surprise adoption, she suggested the idea to Dan.

The plan was set. Unbeknownst to Nikki, she hopped on the virtual meeting with a heavy heart, but ready to showcase Charlie to a potential adopter. During the meeting, Dan surprised her by holding up the adoption papers to show that he had already made it official: Charlie had been adopted ― by them.

Nikki was surprised and thrilled. Charlie was already home.

Now she encourages everyone to foster or adopt. “I cannot stress this enough: The dog you want is in a shelter. A dog returned or a dog who had a rough start doesn’t make them any less loving, it just means their previous environment may have not been the best fit for any number of reasons.”

Today Charlie is living his best life with a big brother, lots of belly rubs, soft blankets and, of course, squeaky toys. 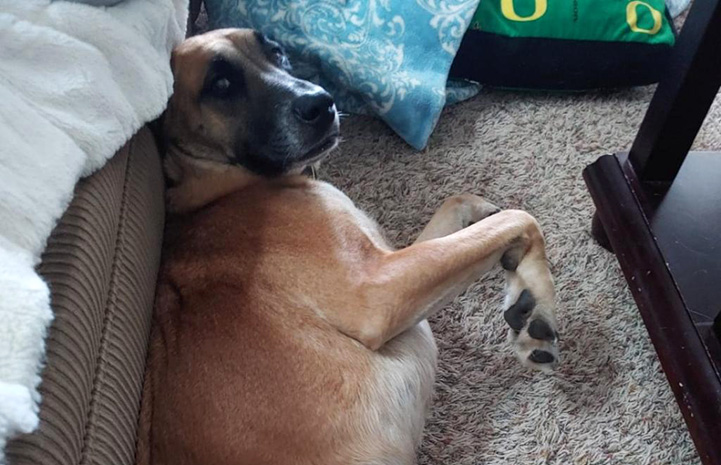 Volunteer, foster, or adopt a pet from your local shelter and make the next chapter in their life the best yet.

Photos by Best Friends staff and courtesy of Nikki Boehmer