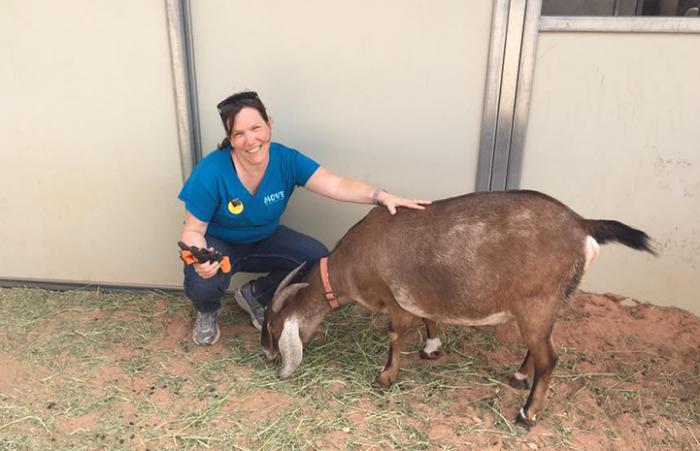 For the people who’ve experienced it — walked in its red dirt, taken in its majestic beauty and touched the lives of its animals — Best Friends Animal Sanctuary is much more than a place where animal lovers go to work and play. There’s a certain magic in the air and in those unforgettable moments when someone makes a heartfelt connection with a rescued dog, cat, bird, bunny or barnyard animal.

The Sanctuary, in Kanab, Utah, is nestled between the sprawling red rocks of Grand Canyon, Bryce Canyon and Zion national parks. But above all, it is an animal lover’s paradise, as well as an oasis for the animals here. People come from all over the country and the world to volunteer with the animals at Best Friends, and we’ve caught up with few of them for a chance to share their stories and experiences from the heart.

Here, Denise Groll from Essex, Vermont, tells us what she loves most about the time she spent at Best Friends.

I volunteered at the Sanctuary in Kanab, Utah. I worked in Dogtown, Cat World, the Bunny House, Horse Haven (with the goats) and Marshall’s Piggy Paradise. 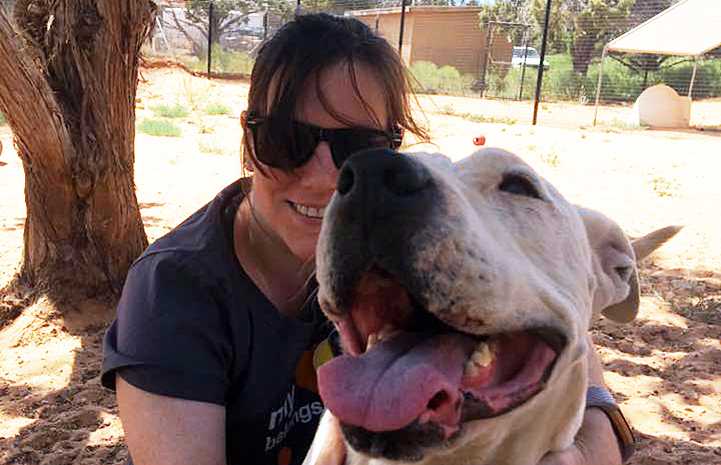 Having a few rescue dogs in our family made me stop and think about how many animals all over the USA need homes, care and nurturing. I was astounded at what my young rescue dog had been through in such a short time span. She was days away from being euthanized when I had her brought up from Texas. She was less than a year old and has been with us for about a year. When the opportunity came up for me to participate in a service trip from my workplace, St. Michael’s College, I jumped at it because I wanted to help Best Friends in some small way. I did, and I will always be grateful for this experience.

We had the pleasure of touring the Sanctuary and setting out to work primarily at Dogtown. For two of our days, we worked in the dog yards to clean out the weeds. We were able to clear one whole area that for weeks had not been accessible to the dogs of that area because the weeds were so high. One of my favorite parts was going to the area where the “single” dogs were, go in their yards to play and love on them. I had the pleasure of being with Yuma, a pit bull terrier mix who stole my heart. I wanted to bring her home so badly! Socializing with the dogs and giving them affection was wonderful. We were able to bring one dog out hiking with us for two days. His name was Tiger, another pit bull terrier mix, and he bonded with my team. He has since been adopted by one of my teammates. 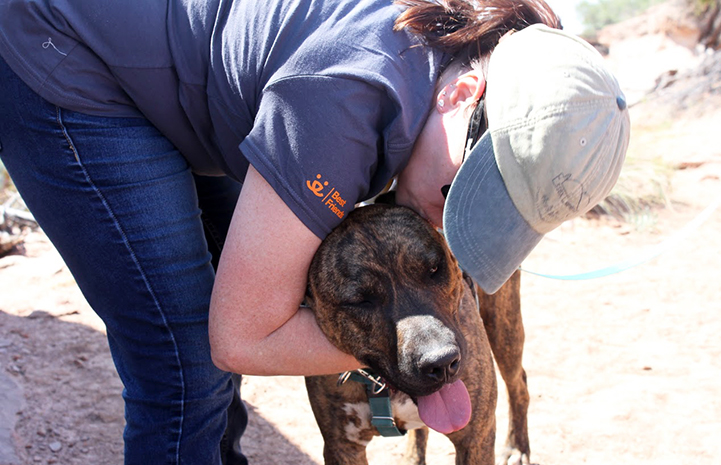 I also worked in Cat World, cleaning rooms and catios, and playing with the cats. We worked cleaning the rabbit rooms at the Bunny House, and I had a blast working in the goat area, clearing foxtail grass out of there so the goats could play without getting hurt. I never knew I would like goats so much! We also visited and played with pigs. I bonded with a pig named Paisley (who was just a doll and has since been adopted) and another pig named Daisy. I learned so much and had so much fun!

For me, it was all an amazing experience. If I had to pick, I would say my time in Dogtown was my favorite. Visiting with Yuma, my new friend, brought home to me again how important it is that we need to take care of what is put on this earth. These animals are just as important as any creature — human or not. Because Yuma must be adopted as a single pet due to her aversion to other animals, she has been waiting for her forever home for a long time. That made me sad, but, at the same time, I know that Best Friends is giving her an amazing life. Working in the animal areas provided me with a deep satisfaction that I contributed in some way to their comfort and care. I knew that, before and after I volunteered, someone else would continue to maintain this extraordinary environment for the 1,600 or so animals who were lucky enough to come to Best Friends.

I have not always had a lot of time to volunteer, but over the years as I have gotten older and my kids became adults, I made sure I made the time to do some work where I could. It wasn’t until 2013, when I had a breast cancer diagnosis, that I realized that I was so lucky to be able to bounce back! I started to volunteer to bring awareness to our local hospital for programs that supported patients with cancer. I also run to raise money for cancer research here in Vermont. I have made time to volunteer through St. Michael’s College at many local establishments that need support. I want to give back in some small way. Circumstances can change a person’s (or animal’s) life in a second, and I want to make sure I can give back, because I have been so blessed during my life.

Tell us about your favorite volunteer moment with Best Friends. 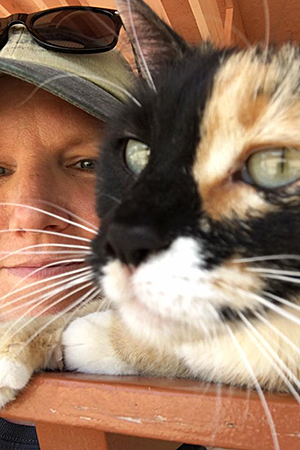 I was sitting in the Angel Village café during a break, and we saw representatives of each animal area speak and give updates on those areas. I had just volunteered at Cat World and had met a cat with a disorder that prevented her from walking normally. She scooted around on her belly, and sometimes a little with her feet. While we were eating, the Cat World person showed a video of this cat and let us know about the disorder and how the cat would live a perfectly normal life with no pain. She then revealed that the cat had been adopted that day. I cried more in those few days I was there than I had in years! This touched me so deeply. This cat’s story made my day, and I kept thinking back to it throughout the rest of our time there.

Was there a favorite animal you met or worked with while volunteering?

Oh, there were so many animals I loved being with! I would have to say, though, that Yuma the dog was my favorite. It was because she and I got to be quiet for a minute and just be. I walked into her yard and she greeted me and a few others with a smile. She went to the corner and grabbed a toy. I sat on the ground and she promptly came up to me, turned around and scooted her behind onto my lap. I was in love. She just sat with me, and I just gave her as much attention and love as I could. We connected, even though it was just for a short while.

For me, it is knowing that our little contribution to the Sanctuary helped keep the wheels turning to save and take care of its inhabitants. As I said earlier, just knowing that someone else would take over after I left and the assurance that all the workers and volunteers would keep it going made me feel at peace. I love what Best Friends is and does. I loved being a small part of it, and I love that my small bit of time there supported its mission of bringing about a time when there are no more homeless pets. I loved learning about breed discrimination so that I can spread the word and let people know how to stop it. I even put out a PSA on my Facebook page to let people know the do’s and don’ts of pig adoption, and to let them know that there is no such thing as teacup pigs. Most import of all, I wanted to be a part of an organization that believes we can alleviate the call for kill shelters by educating, creating and growing a culture that believes in being responsible for animals, so that we can control the pet population and so that all animals brought into this world are wanted, loved and have homes.

I hated that I had to leave Yuma. I had maybe 15 minutes with her before I left, and, when I did, I kept turning around and watching her as I walked away. She watched me, too. How I wish I could have her, but I already have a dog at home.

Is there anything else you’d like to add about your volunteer experience with Best Friends?

My life changed as a result of spending a week at Best Friends. I will never look at pit bull terrier mixes and be apprehensive again. I questioned myself often before this trip: Shouldn’t I be helping people instead of animals? What I experienced and learned reminded me that animals are living beings, just like people, and they deserve every bit of compassion, love, care and nurturing as any other creature. In a time of such turmoil all over the world, isn’t wonderful to know that animals can be of service to their humans in so many ways — most importantly in the role of companions? I am proud to have served this organization, and I will return one day.