This adopter’s home is for the birds — literally

What started as a single stray bird in her backyard soon caused Debi Ford to turn an entire room into a budgie aviary.
By Sarah Thornton

How do you catch a parakeet? Why, with the help of other parakeets, of course. This is what Utah-resident Debi Ford found out two years ago after spotting a stray flash of blue feathers in her yard. The lost pet budgie was hanging out with a wild sparrow, sharing food with the chickens next door and drinking from Debi’s fountain. But winter was fast approaching, and the sparrow eventually flew off and left the budgie behind.

Worried for the bird’s safety as the days grew colder (since this wasn’t a wild bird, but clearly someone’s lost or abandoned pet), Debi did everything she could think of to lure him down from the treetops. She tried gently calling him and offering small piles of delicious treats, but he refused to budge.

He needed to see some familiar faces — as in other birds — and bringing out a pair of budgies (in their cage) from her house did the trick. The stray bird flew right to them, and finally he was safe. Later, Debi would spot an old birdcage left with other discarded furniture in front of a vacant home just down the street.

The crafty bird she rescued from the tree, Periwinkle (aka: Mr. Winkle) reignited her passion for birds and made her want to have more than the three brightly colored parakeets already in her home. So, when she heard about budgies at nearby Best Friends Animal Sanctuary (and that they were looking for a home), she knew she could give them a safe place to land and that her little flock would start to grow.

The founding of the feather garden 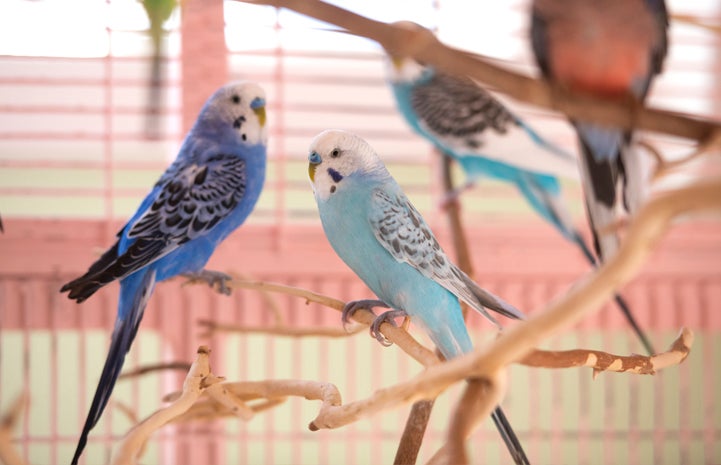 “Budgies get overlooked a lot in rescues,” explains Elle Greer, Parrot Garden supervisor at Best Friends. “Most people don't even realize they are a parrot, and highly intelligent. They can make the most amazing companion animal for the right person. And when I first met Debi back in 2020, I knew we found the right person. Her love for the little birds was evident and they are clearly spoiled.”

Some of the birds Debi adopted from the Sanctuary had been around other birds but weren’t used to spending time with humans. One was even found loose outside, much like Mr. Winkle himself. Some were shy birds wanting as much space as possible to fly and keep a comfortable distance away from people. Debi just wanted them to be happy and feel safe.

To house the three original budgies, Debi and her husband, Bob, started by connecting two large enclosures. There was room enough for the trio to comfortably stretch out and play, but as new additions joined the family, Debi knew they would need an upgrade.

So that her flock of 20 (her feather garden, as Debi lovingly refers to them) would have enough space to flourish, she dedicated an entire room in her home to the colorful birds. Then her son, Joe, built an expansive enclosure to go in it. “I think it took him about a week,” she says. “He painted it pink for me, and then delivered it and put it together.”

The whole thing stretches nearly to the ceiling and it fills the room, leaving just enough space to walk around the front and one side of it. Debi has blocked the ceiling fan from blowing directly onto the budgies with a large, flat shield that instead disperses the breeze around the room in a gentler way. They have several water fountains to drink from and bathe in, plus a vast selection of perches and toys, all built by Debi and Bob.

“The first time I went to her home and saw her pink aviary in person,” Elle says, “I couldn't stop grinning. They obviously loved her and knew they were safe.”

It wouldn’t be wrong to say Debi’s days have gone to the birds, but she’s certainly not complaining.

Birds of a feather flock together 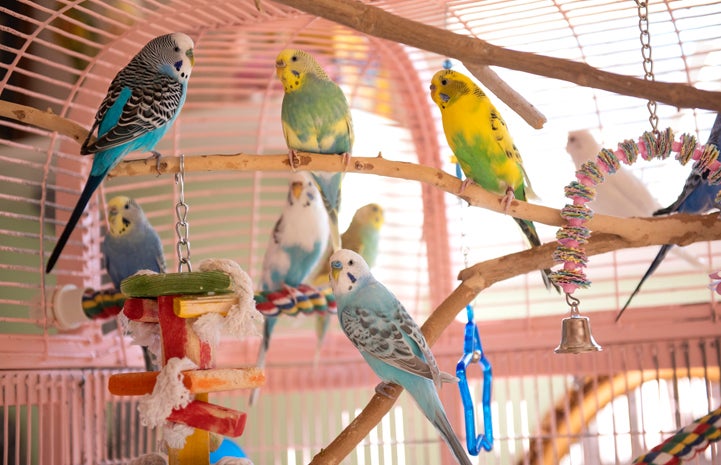 “They get pine nuts, they get all kinds of seeds, bee pollen,” says Debi, going through the bird food inventory that fills half the refrigerator. “I chop grass for them. They get broccoli and romaine every day. They get poppy seeds, which they really love.” There are even walnut pieces, millet and unsweetened coconut treats.

Debi starts at 5:30 every morning preparing food and thoroughly cleaning everything that goes into the budgies’ palace. Not a single branch is left untouched. “It’s a little mini workout for me,” she says with a laugh. “Who doesn’t like to work out? And it gets my butt out of bed. I’m retired, so it’s good for me because I’m not really self-starting. I’m a total cat. I could just lie around all day long.”

[A boy and his bird]

The actual cats in the home — all of them rescued and adopted, just like the budgies — don’t bother the birds at all. One likes to sit in the window and observe, but the budgies just continue playing and chattering among themselves like no one’s there. They know they’re safe, and there’s nothing to worry about from their fluffier family members.

At this point, Debi says her flock is complete, though she admits she still sometimes looks around her home and thinks: Wouldn’t it be nice if we put a huge aviary right there? 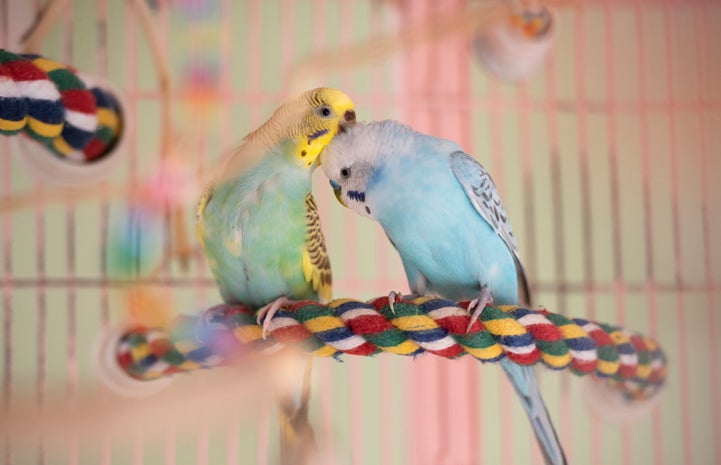 The birds of the feather garden — Mr. Winkle, Twig, Blossom, Stormy, Apple, Leaf and all of the other nature-named budgies — are living like royalty. “She took some of our most shy budgies and gave them a place to flourish,” says Elle. “I hope to be just like Debi someday.”

When Debi steps into the pink enclosure wearing her brightly colored dress, it’s clear they all belong together. After all, you know what they say about “birds of a feather.”

Feathery or furry, animals near you need homes

More pets across the country are looking for a safe place to land. Could that be with you?

Retirement for lifesaving: Couple puts in hours for Houston pets