Fall is the season for Strut Your Mutt, presented by BOBS from Skechers. That’s when Best Friends holds events in 14 cities across the country and invites local shelters and rescue groups to join in and raise funds for their lifesaving work. But in the aftermath of Hurricane Harvey, Saturday’s event in Austin, Texas, took on special significance.

While the goal of the charity dog walk remains unchanged, the storm added an element of urgency to the event. Hundreds, if not thousands of pets in the area need help. And they need it now.

Animal shelters and rescue groups in the area are full, due to a huge influx of pets needing shelter after the hurricane. Because of that, pets already homeless before the hurricane or surrendered to shelters after the hurricane are in immediate need of homes to make space for the animals on hold, to give their families time to find them.

How Best Friends is helping pets after Hurricane Harvey

In addition to organizing transportation to other states for these pets, Best Friends quickly made plans to turn the Austin Strut Your Mutt into a hybrid event. It would now include a super adoption, too. Super adoptions typically take months to plan, but shelter animals displaced by Harvey don’t have months. Best Friends put out a call to area network partners inviting them to bring homeless dogs and cats to the adoption event.

Austin Animal Center, Austin Pets Alive, Houston Pets Alive, San Antonio Pets Alive and PAW Shelter of central Texas all brought adoptable dogs and cats to the event. BOBS from Skechers not only donated an extra $10,000 to Best Friends for Hurricane Harvey relief efforts, but they also covered fees for the first 100 animals adopted. And so, as soon as Strut Your Mutt’s dog walk wrapped up in the morning, the focus shifted to adoptions. 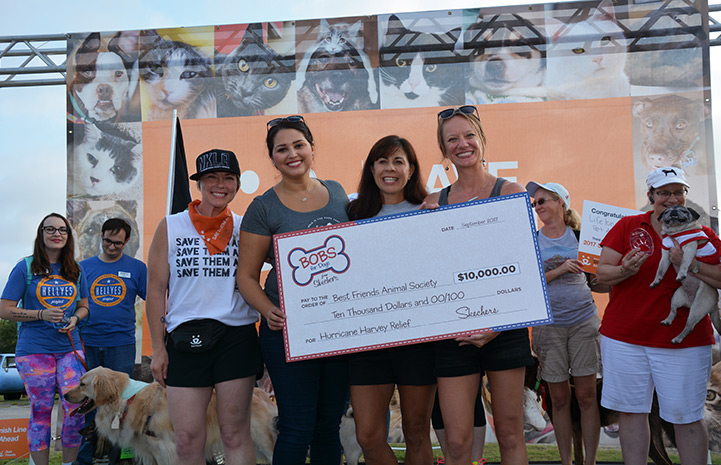 People from Austin and beyond came looking to adopt a new furry family member, and many had the goal of helping in the wake of the hurricane. All told, close to 90 adoptable animals were at the event, and by the end of the day, more than 40 dogs and cats went home.

“All the adoptions today freed up space in our shelter so we can save more lives,” said Shelby Haverda, emergency coordinator for Austin Pets Alive.

Here’s a brief look at some of the animals with new homes.

Pets adopted at the Austin Strut Your Mutt

Jaca Vukovic adopted the first cat of the day. When she signed up to volunteer, she had no intention of bringing home a pet. “But my husband knew better,” she says. He was not at all surprised to receive Jaca’s call soon after she arrived. “We video chatted and I showed him Jojo from Austin Animal Center,” says Jaca. “He told me to just do it.” Jojo will have a brother, a 140-pound dog named George. 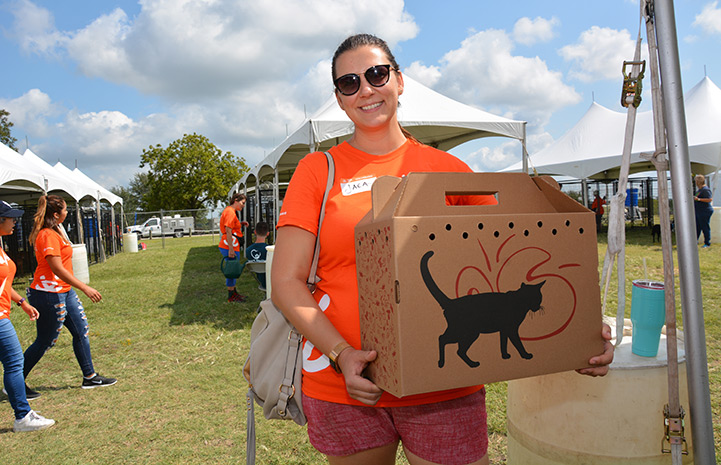 Tanya and Clint Barber had donated to Hurricane Harvey relief efforts, but wanted to do more. “We thought adopting a dog was another way to help,” they said. With older dogs at home, they decided it was time to add a puppy to their pack. They found Jewel at the San Antonio Pets Alive area. The Barber’s sons, Anisten and Rowen, were more than happy with the family’s new addition. 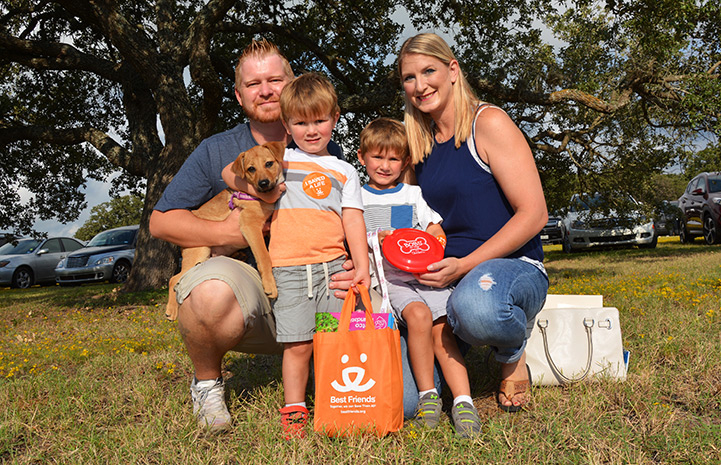 Joel Momberger had been looking to adopt a pup for about three months. “After seeing all the pets stranded after the hurricane, I figured it was time,” he says. With the goal of trying to get more exercise, Joel adopted four-month-old Mona, an energetic pup from the Austin Animal Center, who fit the bill. “I really lucked out,” he says, holding his new fitness partner tightly. “She’s a great match.” 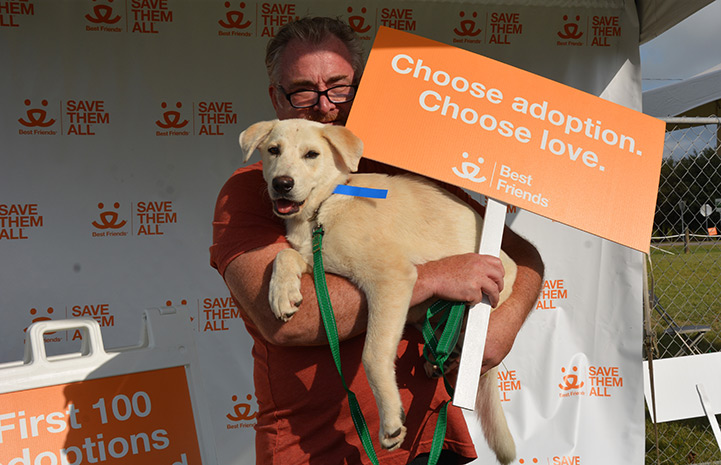 Once Star Ramos and Tyler Reeves finished walking the Strut Your Mutt route, they decided to check out the super adoption area. They were instantly drawn to Charli, a beautiful brindled dog from Austin Animal Center. A meet and greet with their dog Robin went well, and from that point on, Charli had a new home. “She’s the perfect addition to our family,” says Star. 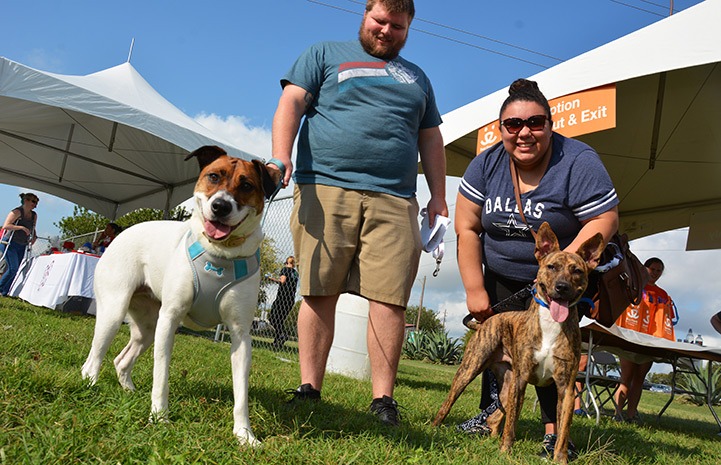 Liza and Mike Larson were already fans of Best Friends, having spent their honeymoon at the Sanctuary in Kanab. “We thought adopting a dog was a good way help animals after Harvey,” Liza says. When they met Cody, it was love at first sight. He had been hit by a car and his leg had to be amputated. Much like Cody himself, the Larsons were unfazed by the fact that Cody was a tri-pod. “We’ve been looking for the right dog for quite a while,” says Liza. “Cody was definitely worth the wait.” 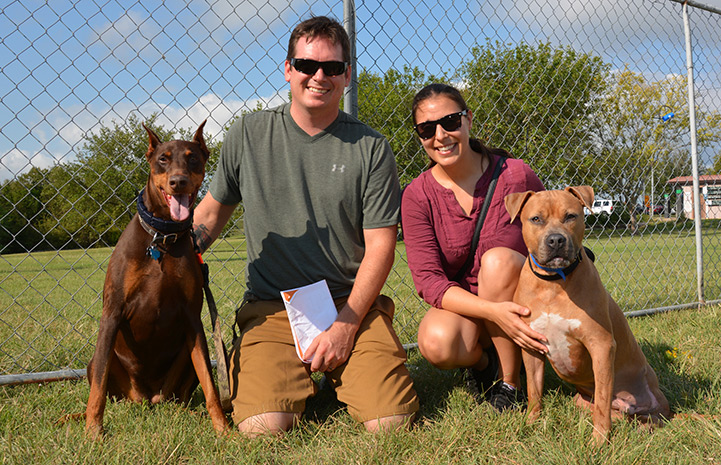 Olivia Robles and Jacob Blazi found the right fit with Maui, a deaf dog from San Antonio Pets Alive. Olivia was drawn to Maui’s adorable white mug. “I’m really looking forward to learning how to best train her,” said Olivia. “She will definitely be spoiled.” 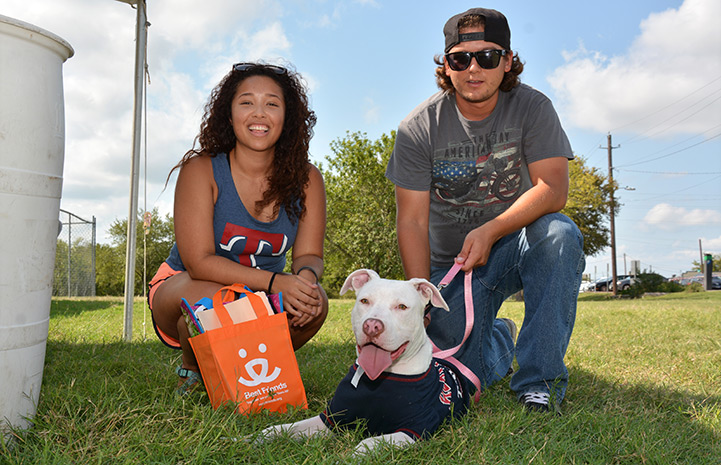 After spending some time with Quack, an eight-week-old hound at Austin Pets Alive, Laura and Chris Camacho made the decision to adopt. “We hate the idea of pets being killed in shelters just because there’s not enough room,” says Laura. “When we saw what was happening to all the animals after Hurricane Harvey, we thought now is the perfect time to act.” 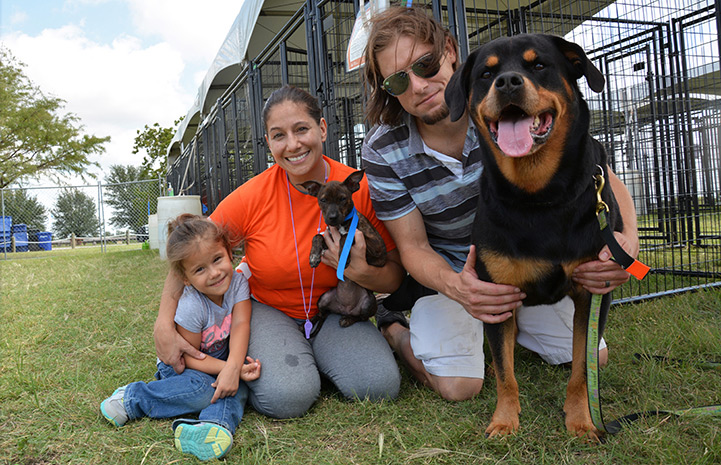 Kadence, the couple’s four-year-old daughter, was all smiles once she realized Quack was coming home with the family. She decided Quack was not an appropriate name, and renamed the pup Duck. 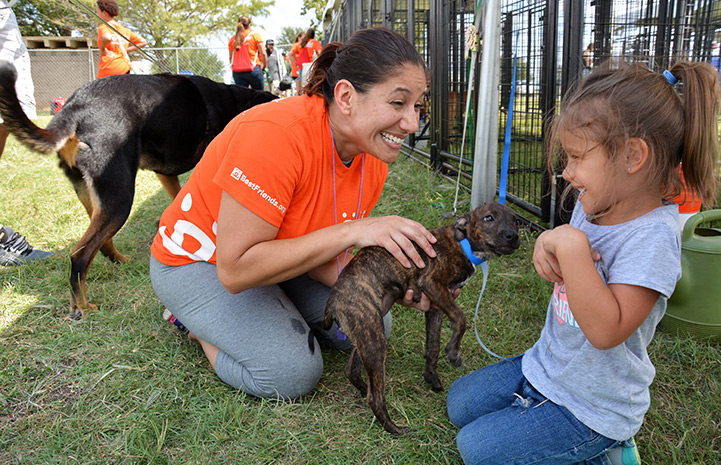 Volunteer Fred Willemsen and his wife (both are cat people) fell hard for an older cat named Achilles. “He’s an old man,” Fred said gazing into the cat’s kennel. When volunteers thanked Fred for giving Achilles a home, he said, “There’s no need to thank me. This is what we do.” 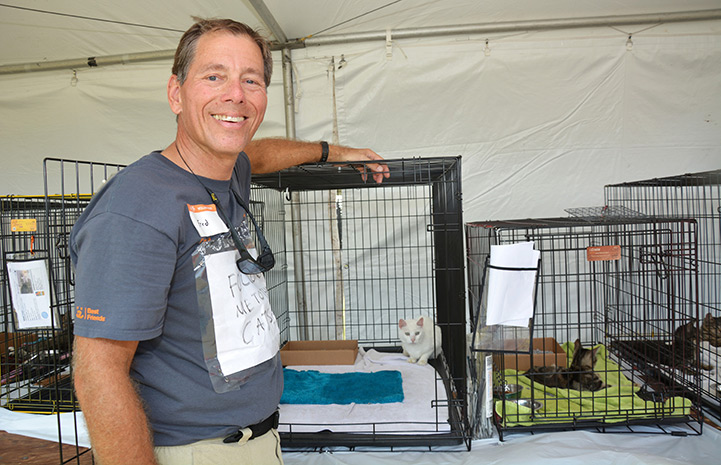