Breaking the cycle of dog OCD

For most of us, sunbeams, shadows and reflections are simply part of the normal backdrop of our lives. But what if you were so sensitive to even the slightest movement of light that it was all you could see? And what if you couldn’t resist the urge to chase every single reflection and sunbeam? It would be like an endless (and frustrating) laser pointer game.

That’s what Castiel was experiencing when he first came to the Sanctuary from a Best Friends No More Homeless Pets Network partner shelter. The four-year-old dog, who has obsessive compulsive disorder (OCD), was so obsessed with light and shadows that they controlled his life. From sunrise to sunset, Castiel never settled down. He’d spend entire days chasing and barking at even the tiniest flecks of light. He needed help if he was ever going to live a happy life.

Castiel was so preoccupied that he couldn’t enjoy simple things like a stroll along one of the Dogtown trails. That was no way for a dog to live, but his obsessive compulsive behavior seemed deeply ingrained and there were no quick fixes.

Dogtown caregivers and trainers began working with Castiel to help bring some peace to his life. The goal was to teach skills that would help him focus on things other than light and shadows. That meant keeping his mind and his body occupied more constructively. It also meant creating calm, quiet spaces where he could take breaks when he was feeling overwhelmed. 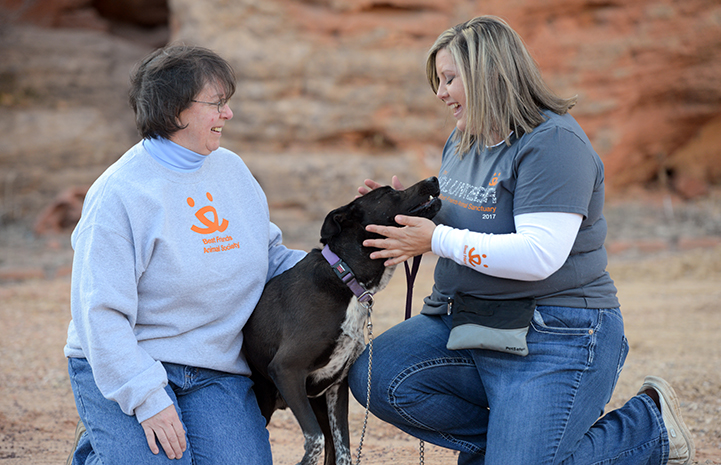 To break the exhausting cycle, caregivers planned for Castiel to have quiet time in a dim, quiet room at Dogtown headquarters. This room gets so little light that it became the perfect place for Castiel to “turn off” for a little while. He could rest and find peace, even in the middle of the brightest days. And he was treated to food puzzles, peaceful nature music and piles of fluffy blankets and comforters.

Castiel’s regular room in Dogtown faces the side of the building that gets the least amount of bright sunlight. His window is covered with a thick towel to keep the walls clear of bothersome reflections. His caregivers also plan his day around the sun’s path — working with him when and where the light is the weakest. 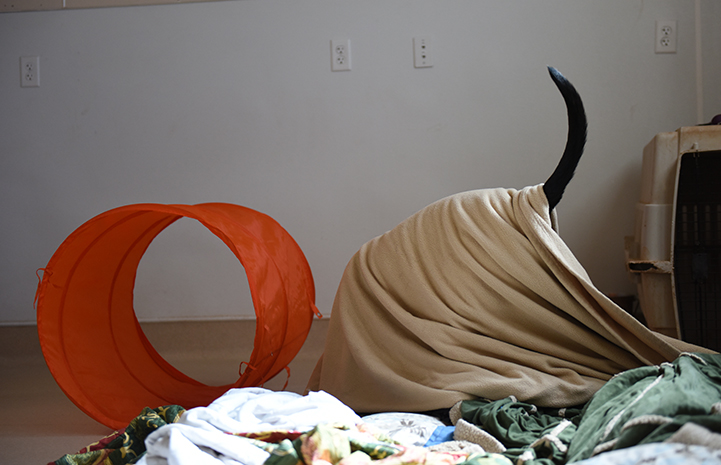 To help Castiel gain better focus, his caregivers started working with him in short sessions of relationship-based dog training. First, he learned basics such as “sit”, “down” and “wait.” He also began working on crate training, since a crate (covered with blankets) is a great place for Castiel to rest and feel safe.

Castiel also started learning a fun herding sport for dogs — treibball — which keeps him physically active and helps him channel some of the energy used to chase reflections. As he began responding to the training and showing improved focus and a willingness to learn, Dogtown caregiver Paul Lindley started helping Castiel to achieve a really big goal: earning his bachelor’s degree in Canine Life and Social Skills (CLASS).

CLASS is a relationship-based training program that teaches dogs good manners and helps them to strengthen bonds with caregivers. The program has three levels (bachelor’s, master’s, and doctorate) and teaches skills that dogs need to be happy and successful in a home environment — like waiting at doors and learning how to “leave it” when something drops on the floor.

For Castiel, preparing for a CLASS test would also mean devoting his time and energy to something far more fun and rewarding than chasing after the always elusive light. 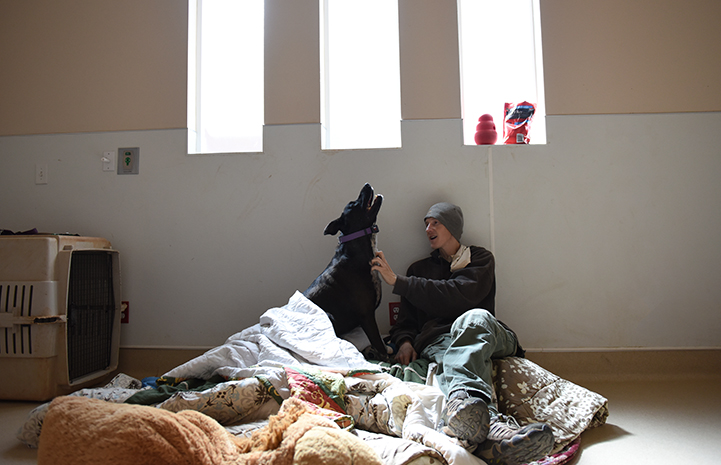 It wasn’t an easy journey for Castiel. He and Paul worked together nearly every single day ― sometimes several times a day. Occasionally, Castiel struggled to learn a new skill (“Leave it” was particularly difficult for him) or to look away from the light long enough to focus on what Paul was asking him to do.

Months of training stretched into more than two years, but Paul didn’t give up because despite the setbacks, he knew that Castiel has what it takes to be successful. “He is really smart and he does everything 100 percent,” Paul says.

So when the day finally came for Castiel to ace the test, Paul was ecstatic but not surprised. 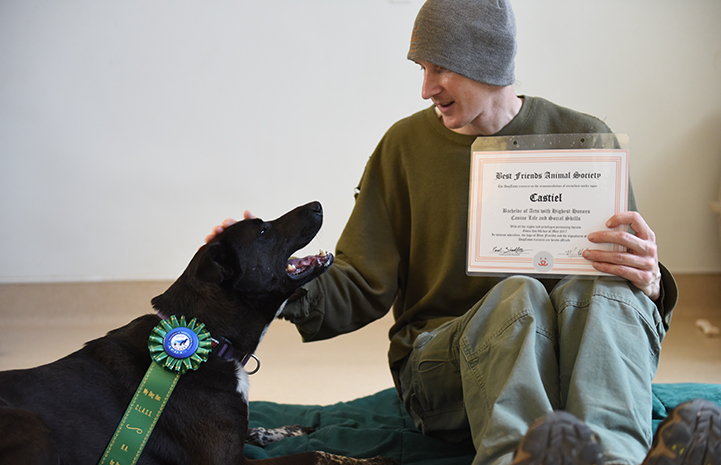 At ease in the world

Having a bachelor’s degree in CLASS hasn’t cured Castiel of his light obsession. But all the training and hard work has given him an enormous amount of control over it. And that’s opened up a whole new world for a dog who once struggled to cope with daily life.

Instead of compulsively chasing light all day long, today he loves playing with dog toys, stretching his legs on the Sanctuary trails, going on sleepovers and outings with volunteers and even enjoying a well-deserved splash in the creek or the dog park pool.

Although he still gets his quiet times, Castiel no longer has to be in a dark “comfort” room to find his Zen. Now he finds happiness just about everywhere he looks, even when he’s out and about in the bright, beautiful world. 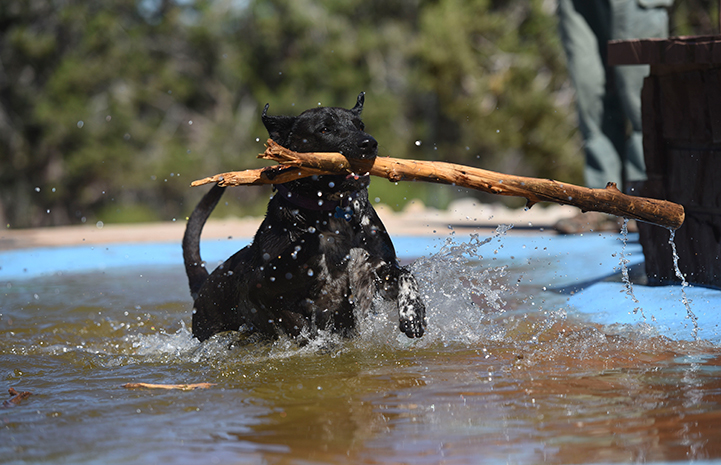