Fall in love with these dogs during Pit Bull Awareness Month

Celebrate pit bull terriers with five adoption stories that show how kind and loving they truly are.
By Nicole Hamilton

This month we’re celebrating some of the most kind and cuddly, gentle and joyful dogs you’ll ever meet. That’s right, it’s Pit Bull Awareness Month, although at Best Friends, there's always an opportunity to honor our four-legged friends and to dispel misinformation that can be harmful to them.

Each pit bull terrier is an individual and just as safe and gentle as any other dog. There are millions of these dogs in our country, and they’re family pets, therapy dogs and service animals. In honor of the month, here are five stories about pit bull terriers, all adopted from Best Friends, who are living their best lives and bringing so much joy to their families. 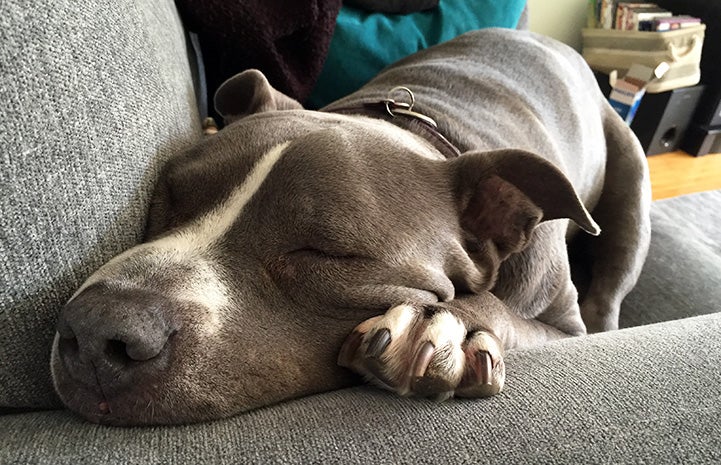 Gary’s a laid-back guy. Long runs on the beach aren’t really his thing, although he doesn’t mind a slow hike with his family up at Big Bear or a light stroll down at the beach. He’s cool with anyone coming to the front door, sees no reason to bark at the mailman and is a great lover of the couch and snacks. (Although when he first came to Best Friends, he was more likely to try eating the couch.)

Usually you can find the 10-year-old pit bull terrier mix with his fellow canines-in-residence, Pebbles and Stella. Adopters Larson and Donny Kuhn, say Gary is often the best behaved of the three, and that’s really saying something, given that he used to try to put anything and everything in his mouth. He was just so excited about everything that he couldn’t help it. But now that he has endless love and attention from his family, plus dog friends, he has relaxed into his new life as the best boy. 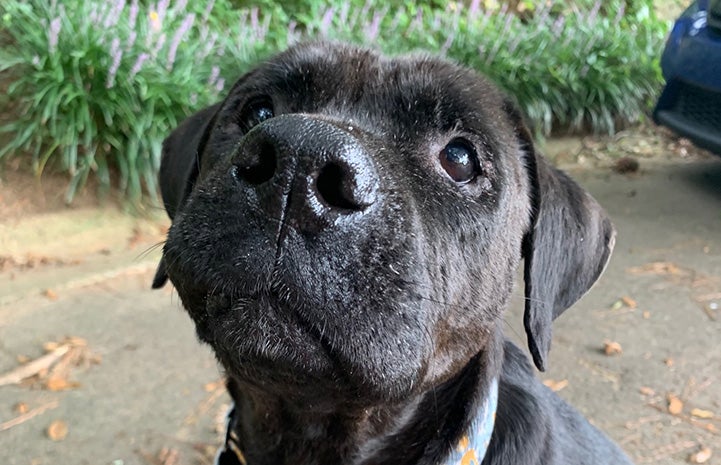 When Miss Rogers came to Best Friends in Atlanta earlier this year from Wharton County Stray Pet Outreach Team in Texas, she had quite a list of medical issues. She was too thin and had a skin infection that left her with patchy fur. She also had entropion (a painful condition that causes her eyelashes to rub up against her eyes) and bad teeth to boot. On top of all that, she was diagnosed with heartworm disease.

Still, the five-year-old pit bull terrier mix was kind and gentle to everyone she met. After surgery for her eye condition and treatment for her other health issues, Miss Rogers went to a foster home, where she put on 17 pounds and flourished. Not too long after that, she captured the attention of Jessica Scott, a vet tech who says she was looking to adopt a fellow couch potato.

Today, Miss Rogers (now called Ada) is as healthy as ever and enjoys strolls around the neighborhood, belly rubs and cuddles on the couch. “I’m just so happy she’s in my life,” says Jessica. 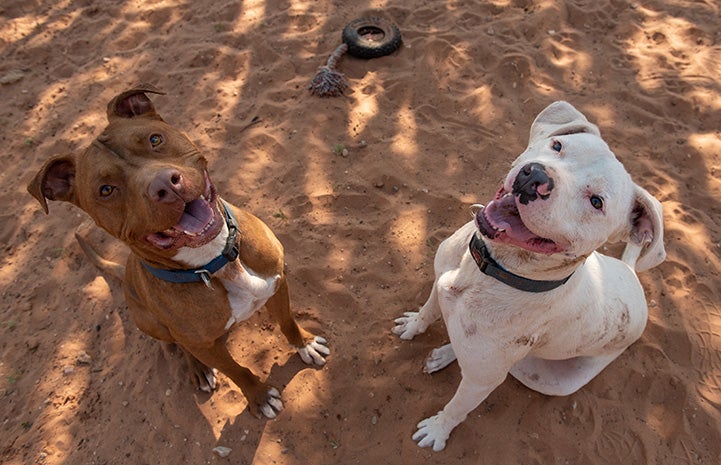 Hercules Mulligan proves that a little understanding can go a long way. After his person passed away and he lost his home in New York, he came to Best Friends Animal Sanctuary in southern Utah. The trip out west was, understandably, tough for Hercules, who was overwhelmed and showed it by barking at people and lunging at other dogs.

Throughout the long trip and after arriving at the Sanctuary, Hercules held his late person’s shoe in his mouth. It was clear to caregivers that he was feeling the loss deeply and needed plenty of love and understanding. Slowly, they helped him feel better around other dogs. And while they made small strides, what really turned the tide was introducing him to a fellow pit bull terrier named Deborah.

Hercules was his usual, over-excited self at first, but when he did anything Deborah didn’t like, she corrected him and he quickly backed off. And when he wasn’t the one being ridiculous, it was Deborah climbing all over him, playfully pulling on his face and ears. Time, understanding and a canine friend made all the difference and now Hercules is happy again.

Cannoli scores a new family and a BFF along the way 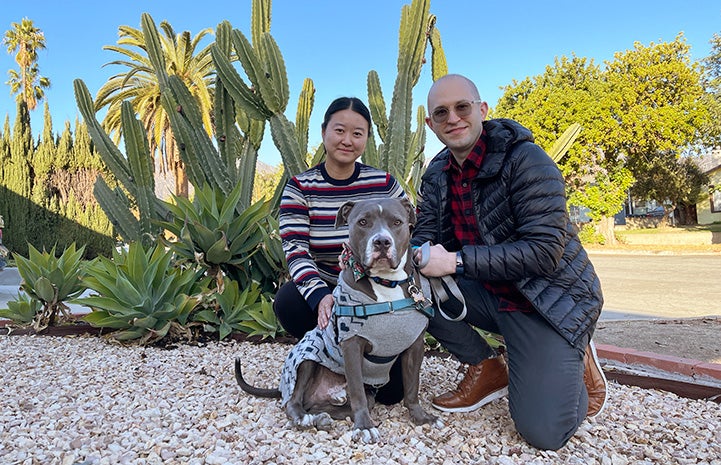 Cannoli is as sweet as his name, but when he was at Best Friends in Los Angeles, his over-the-top energy was steering people away from adopting him. Enter Danny Bress, a longtime Best Friends volunteer who made an instant connection and became Cannoli’s BFF.

Danny saw past Cannoli’s booming bark and occasional reactivity when he was on a leash around other dogs. Knowing that he could make a big difference in Cannoli’s life, Danny visited the six-year-old pit bull nearly every day and helped connect him with his new family.

Today, Cannoli is thriving at home. He’s getting more confident and relaxed around people and the dogs he meets in the neighborhood. But one thing has stayed the same: Danny is still his BFF. 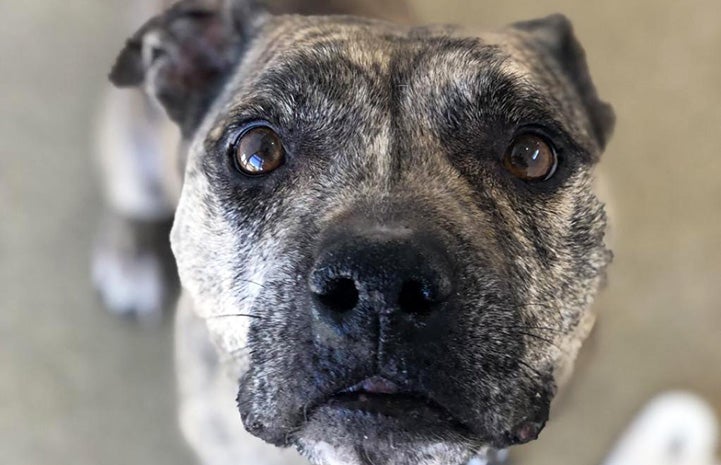 Andrea Robinsong came to Best Friends Animal Sanctuary hoping to adopt an “old pit bull.” She didn’t look long before meeting Gemma, a 10-year-old dog who loves behind-the-ear scratches and has been known to wag her tail so hard she’s injured it.

With Gemma’s advancing age and health issues that included food sensitivities and arthritis in her knees, wrists and toes, it wasn’t clear if she’d ever find a home. But all it takes is one person to change a dog’s life. For Gemma, that person was Andrea, who fell in love with the gray-muzzled dog as soon as she met her.

Today, Andrea, who is 74, says that her decision to adopt Gemma has gone better than she could have imagined. “It was all about love,” she says. “This was definitely all about love and about saving an old dog.”

Did you know that some insurance, rental policies and even some cities and counties unfairly classify as “dangerous” certain types and breeds of dogs? That leads to countless pets losing their homes and ending up in shelters, or worse. Lend your voice to efforts that help good dogs by ending breed restrictions.

Speak up for pit bull terriers