If you’ve lived with a dog, you know why in the language of the Navajo Nation, one of the sacred names is “door watcher.” The Navajo Nation is 27,000 square miles of desert touching Arizona, New Mexico, Utah and Colorado. It’s the largest reservation in the United States with a population of around 158,000 people living on homesteads across the region.

It may feel like another world to people who haven’t spent time in the Southwest. But appreciating dogs as door watchers? If you’ve ever had a dog or crossed the threshold of a dog’s home, you get it.

Residents of Diné Bikéyah (or Navajoland) share their homes and the land with countless dogs, cats and other animals, and Keith Slim-Tolagai is there to support them. In his new role as the Best Friends Navajo Nation program specialist, Keith is expanding work that’s taken place on a small scale for years. Best Friends Animal Sanctuary is only about a 90-minute drive from the edge both of the Navajo Nation and the Hopi Nation. In the rural desert, that’s “close.”

Keith grew up on the Navajo Nation in Piñon, a hub connecting many smaller communities (or chapters) in the center of Navajo Nation land. After nearly 30 years away for college, graduate school and a career in youth outreach, he calls Piñon home again and he’s extending his work to help the area’s animals.

Helping dogs and cats always means working with people. That’s where Keith’s experience, paired with his passion for animals, is already laying the groundwork to support more pets and the people who care about them. In the following interview, Keith shares his ideas about what he believes is needed for the pets and people the Navajo Nation and how Best Friends Animal Society can assist. 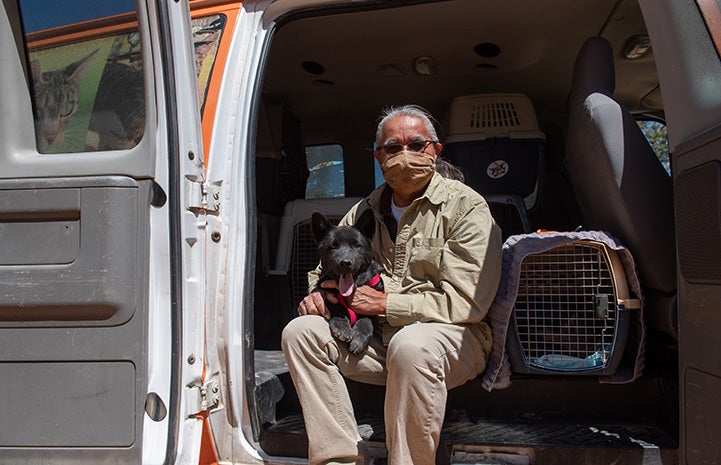 Growing up, I always had dogs and cats. A lot of the animals that came into my life when I was young would just wander onto our homestead and I took care of them.

In our traditional stories we talk about how animals are sacred. They belong to the thunder gods as their protector and we should treat them a certain way. They have everyday names, but they also have sacred names. We call our dogs “earth listeners” or “doorway protectors.”

How did you get involved as an adult with the animals of the Navajo Nation?

I moved back home to Piñon after being away for about 30 years and saw that there had been a lot of changes. We have a lot of things we didn’t have when I was growing up, like a school district, supermarket, a pizza place. The other thing I noticed is that there’s a lot more neglect of animals now, I think.

I take care of six kids — my nephews and a niece. They all like animals. When we’d go to the grocery store, there were dogs and puppies in the parking lot. We started buying dog food for them until the security guard told me to stop. So, I started picking up the dogs and asking around to find out where they could go. That’s when I found out about Many Farms animal control shelter. They vaccinated the dogs and puppies. That’s when I learned that there were organizations that come and pick up dogs from animal control each week and find them homes off the reservation.

Our dog, Daisy, had a litter of puppies and we could not rehome one of them. My nephew named her Abini, which means “morning” in Navajo, because she has one brown eye and one blue eye. He said you can see the dark in her brown eye and then the morning in her blue eye. I contacted Olivia Holiday (about Albini) at Navajo Nation Dog and Puppy Adoption Program, which takes in female dogs and puppies. I said I didn’t want her to be euthanized and Olivia assured me that the organizations they work with don’t do that.

Abini went to them and then she got adopted to a home in Colorado. Olivia sent me a picture of her from her new home and you could see she was happy. When I saw the picture, it made me feel good that Abini’s in a good place in a good home. That really encouraged me to work with the Navajo Nation Dog and Puppy Adoption Program and to bring her more of the animals that need to be rehomed. Then people started coming to me when they had puppies or pregnant dogs they couldn’t keep. So, I would reach out to Olivia and work with her on transferring the animals to her. 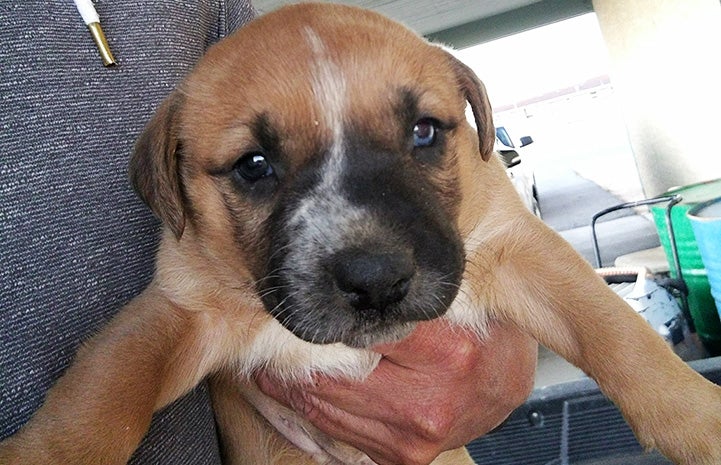 Working with animals is something I’m very passionate about. We have three dogs and four cats. When I saw the position that was open, I thought: “I think I’ll apply. Maybe I’ll change direction.” I like working with people. I’m pretty quiet, but I like to do a lot of outreach and that’s part of this role. I like traveling and a lot of this role is transporting animals.

On the reservation I’ve worked with a lot of people, and that’s a strong background to have with this role. My background is in education. I’m not a teacher, but I’m an educator. I’ve always done a lot with outreach and community engagement, training materials and curricula. That’s one of the things we need here. I think people have gone away from the teachings about how animals are sacred. They just forgot. I want to bring that awareness back.

Every animal we know has a sacred name, and respecting who they really are — that they are our protectors and they are part of our families — is really important. We need to bring back awareness of kindness to animals (even the other animals, horses and cattle), just remembering that they’re part of us on earth. And we need to remember that they have a special place, too. I think that awareness is needed. 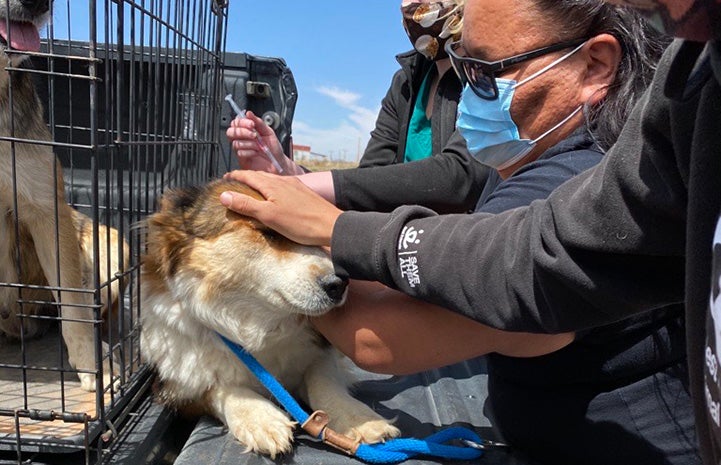 What are the challenges facing the pets and people of the Navajo Nation?

I don’t want to say lack of resources because there are resources. The challenge is transportation, location and funding. The reservation is so vast.

There are mobile low-cost clinics, usually in Tuba City or Monument Valley or Chinle. Oftentimes people really want to take their pets to them, but … people sometimes don’t have a ride or know who to ask. And the cost: Even though some of the vaccinations and even spay/neuter are low-cost, some elders or some people just don’t have the $10 or $20 per animal. If they have five pets, that’s $50, so that’s a challenge.

Another challenge is that there are only four animal shelters and four animal control officers who do the fieldwork, and then four kennel officers at the shelters. That’s a big, big area for those individuals to answer calls.

What are some of the best things going for the area’s pets and people?

Even though we have an overpopulation, there are a lot of people who do care about their animals. People find ways to get their pets vaccinated and spayed or neutered. Those are the individuals we need to tap into. Those are the advocates. They’re the ones who reach out and say “Hey, I’ve seen an animal.” The majority of people are caring. (But) I think there are some people who might be overwhelmed and might not know where to reach out or what to do.

There are other people coming in like Best Friends, Soul Dog Rescue, Hopi Dog Rescue and Good Dog Rez-Q. All these organizations are willing to help and come in and provide all the awesome things they’re doing, such as transports, spay/neuter, vaccinations. A lot of the people appreciate that. There are a lot of resources available. The key is helping people here know how to tap into them. 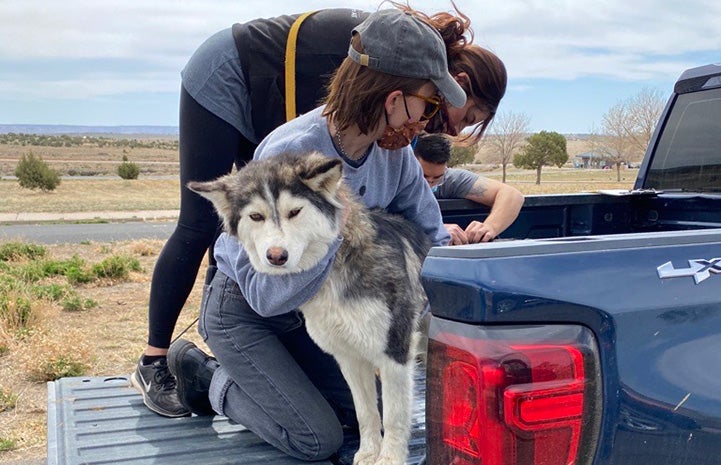 What are you working on now?

There are three goals. The immediate one is the lifesaving. Since I started, Best Friends goes every week to pick up dogs and cats from animal control so that they’re not inundated. So long as (animal control knows) that the animals being surrendered have a place to go, they’re willing to keep them until organizations like Best Friends or others come to pick them up.

We’re getting … a better schedule of transports established with all the different organizations coming in to take animals. So for example, Best Friends will be there every Wednesday to take 10 animals, and Soul Dog (which has been saving animals for years) will (come in) every Friday or whenever there is a crisis and take all the animals.

The second goal is really encouraging people to spay and neuter their pets and take the responsibility to vaccinate them as well. One of my roles is to assist. I’ll get the ball rolling, but we need to take ownership of caring for our animals (and) our pets, and not just have them reproduce with people not caring and just throwing them on the side of the roads. People need to know that there are places to go to spay or neuter their pets.

That’s the other part I’m really excited about — bringing that awareness back and getting the communities to start (being) responsible for our own pets and being informed on what they can do to stop that overpopulation.

The third goal is getting people involved to establish groups in the different communities. They will know what resources are available in those communities and the groups that can help individuals. And I think that might be a solution — knowing that when there’s a crisis or someone needs help, people can step up and say they can help, they have a vehicle or ask if someone needs a ride. Those kinds of groups or hubs are what we need to establish.

Regarding your hopes for this work: If your dreams came true, what would that look like?

My hope is that we start to create our own animal rescue program on the reservation. There are all these animals and it’s hard to see them wandering hungry. For me the ultimate goal is to get more shelters situated in the different locations, because just four in an area as vast as the reservation, isn’t enough. There should be a shelter for each community close to each of these chapters so people can come there and get their pet spayed or neutered or vaccinated. Or if they need to be rehomed, they can do so.

I’d like to eventually minimize the number of dogs and cats going out and make the communities responsible for their own animals and their own pets, and when pets need to be rehomed, adopting them out here. Because we know … we know how things are in our own communities and we know what needs to be done. 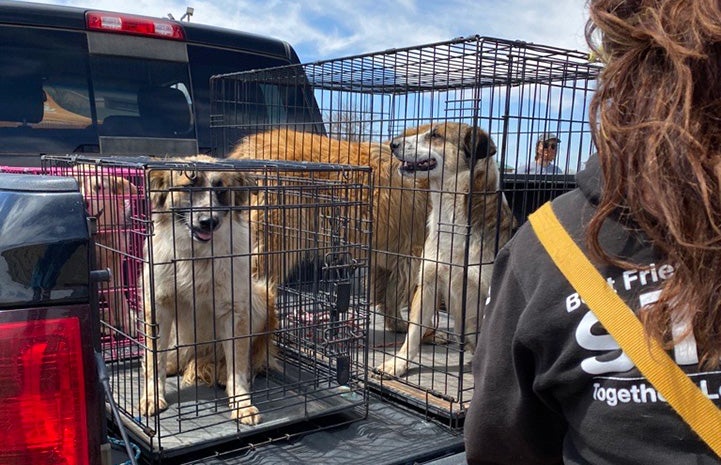