Image
A mama dog and her puppies are saved from the rising Hurricane Harvey floodwaters. Now all have been adopted into forever homes in Los Angeles.
By Katie Southerland

A year ago, Abilene was struggling to survive while carrying her puppies one by one away from rising Hurricane Harvey floodwaters. Now the only thing this sweet girl struggles with is finding a comfortable spot on the bed. 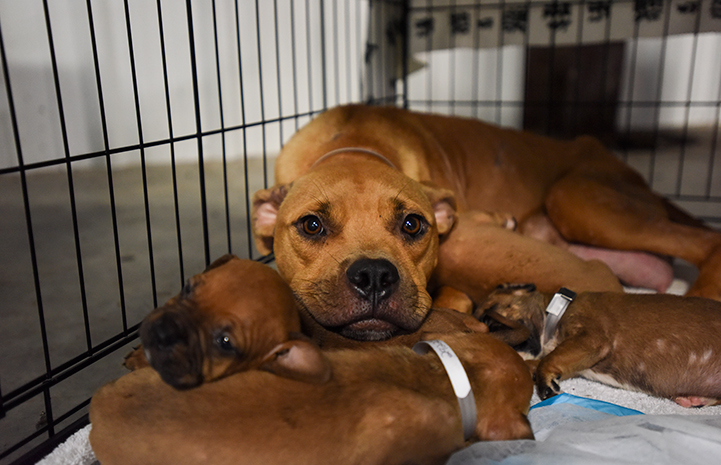 “She stayed with us when we got back from Houston,” says Katie Larkin, Abilene’s foster (and eventually, her adopter). “The longer we had her, the more we realized we couldn’t let her go. She’s just too special.”

If anyone could see how truly special Abilene was, it was Katie.

As the executive director and founder of Angel City Pit Bulls (ACPB), a Best Friends Network partner in Los Angeles, California, Katie and other members of the ACPB team were on the ground right after Hurricane Harvey struck, working with Best Friends Animal Society to help pets affected by the storm. That’s when she first met Abilene, and that’s when she first fell in love.

A kind local couple brought Abilene to the Montgomery County Animal Shelter, where Best Friends came in to assist with disaster relief right after Hurricane Harvey hit. But Abilene didn’t come alone. The couple said she arrived with four tiny puppies in tow and, with floodwaters rising around her, carried them to their porch one by one.

Despite being tired, hungry and in need of medical care, however, Abilene was in good spirits. “She was so scared and thin, but she was sweet as pie,” Katie says. “She had this tiny, low tail wag and you could see right away how special she was. There’s no way anyone can meet her and not see how special she is.”

Though Abilene and her young pups were in good hands with all the other displaced pets at the rescue center, they’d soon need a safe place to go. Luckily for them, Katie knew exactly where that safe place was — her house, back in Los Angeles. 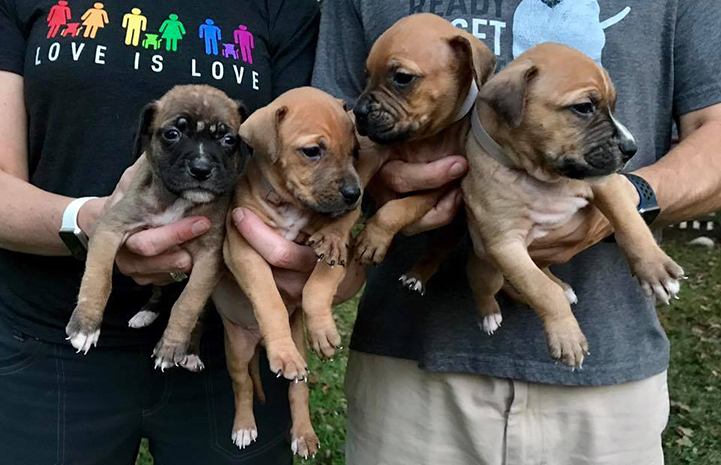 Katie didn’t intend making Abilene a permanent member of her family. After all, as the executive director of a rescue group, she normally fosters dogs and then they go on to forever homes. But then again, she also didn’t count on Abilene filling her heart with so much joy.

“She’s just so silly and sweet,” Katie says. “She’s great with other dogs. She’s sweet with cats and birds.”

Though Abilene has always been a sweetheart, it did take her a little time to settle in to her new home. Because she’d been on her own fighting to survive for so long, she’d gather anything she could from around the house and put them in her crate. For the first few months, Katie was constantly cleaning up stashes of water bottles, shoes, papers, blankets and anything else Abilene happened to find.

Abilene doesn’t collect things anymore, but according to Katie, she does still carry around some of her habits from the street. For example, when she gets nervous, her first instinct is to hide under a bush.

Physically, however, Abilene has made a total transformation. When she was first rescued, she was underweight suffered from a terrible skin infection and heartworms. But today, her coat and weight are back to normal, and she’s heartworm-free. 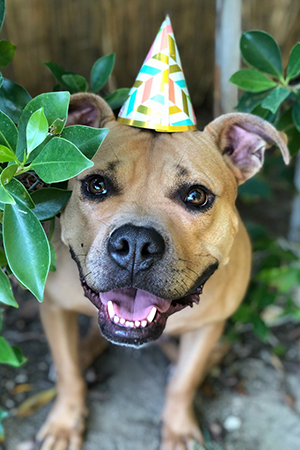 A happy reunion with a mama dog and puppies

As for Abilene’s puppies, they’re doing just as wonderfully as she is. At about eight weeks old, they were all adopted into homes. And the best part? Their adopters still keep in touch. In fact, when the puppies turned a year old, they all had a birthday party and, of course, momma Abilene was the first to be invited.

“Abilene was so happy to see them, but she was also a little overwhelmed, so she had her birthday cake under a bush,” Katie laughs.

Abilene probably would have never guessed that a year after she survived a hurricane, she’d be living the good life in L.A. But one thing’s for sure: She’s exactly where she needs to be — surrounded by as much love as she can handle.

She’ll never want for anything for the rest of her life. Katie says. “She’s found her home.”

You can save a life. Adopt your next pet.