Image
Miracle kitten who was hit by a car receives care and treatment at Sanctuary and then is adopted into loving home.
By Christelle L. Del Prete 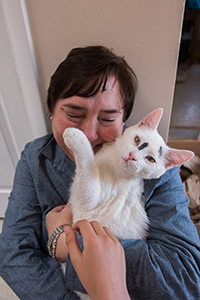 Sprawled out and sleeping in the arms of his adopter or cuddling with new friends Lauren and Megan, Cookie looks like a cat whose life has always been this good. But at the Sanctuary, he’s known as the miracle cat.

When we recently shared the story of Cookie the kitten, people were amazed by the little guy’s will to survive. First, the adorable white kitten with the black cookie-sized spots survived a terrible car accident. Then, with critical and supportive care from the Best Friends veterinary team, he overcame the serious kitten neurological disorders that suffered as a result of that accident.

More than a coincidence

It’s not surprising that Cookie’s incredible strength and spirit got noticed. One of the people who noticed him was longtime Best Friends supporter Christina Zimmer. For the past 10 years, Christina has been coming to the Sanctuary to volunteer several times a year. She’s even adopted two cats from Best Friends, and although she wasn’t necessarily looking to adopt another cat, Cookie’s story struck a chord with her.

For one thing, Cookie reminded her of Noah, the beloved black-and-white cat she had for 16 years. For another, Cookie’s story haunted her. She thought the feeling would pass — until a friend emailed her to ask if she’d seen Cookie’s story and if she’d considered adopting him. To Christina, who hadn’t told anyone of her feelings about Cookie, it was more than a coincidence. It was what finally convinced her to contact Best Friends to ask about Cookie; but when she did, she found out that there were several people already interested in him.

Christina says at that point she decided to step back: “Since there are so many needing homes, the idea of ‘competing’ for a kitty felt wrong.” She knew that when the time was right, a cat who needed her would come into her life. That happened more quickly than she imagined. 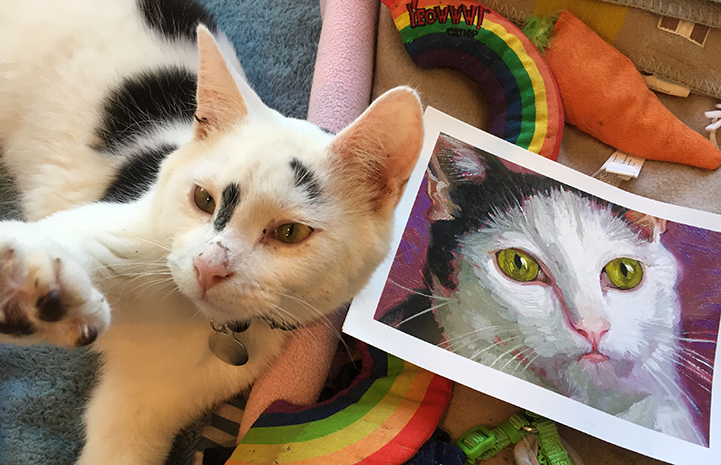 “The sweetest cat in the world”

A week after she first inquired, Christina learned that Cookie’s other potential adoptions had fallen through, and that she was next on the list. So she packed her bags and headed to the Sanctuary to meet him. It doesn’t take Cookie very long to steal people’s hearts, and Christina was no different. “I cried when I finally met him — I knew I would,” Christina says. “He really has to be the sweetest cat in the world. He hugs you and licks your face.”

Christina could easily have scooped Cookie up and taken him home on the very first day. But, since she’d traveled from her home in L.A., she wanted to make the most out of her trip. That included taking Cookie on an outing to Angels Landing, a stunning natural outdoor amphitheater and grassy cove at the Sanctuary. 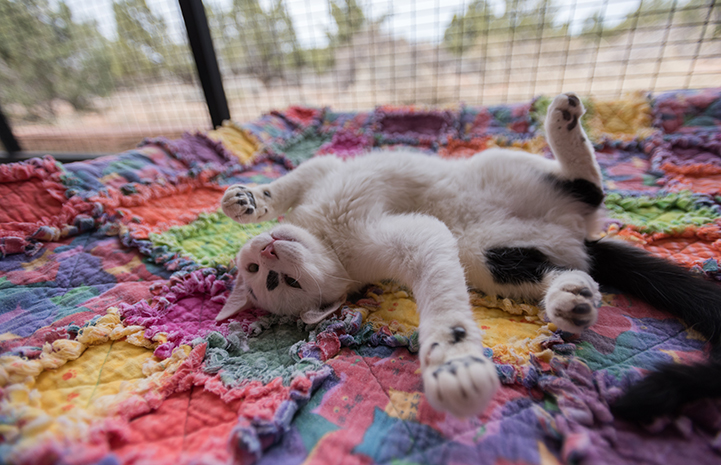 From abandoned and injured kitten to beloved pet

Christina also spent an afternoon volunteering in the Cat World building where Cookie lived. There, she introduced him to Lauren and Megan, nine- and seven-year-old daughters of her friends, who also were at the Sanctuary volunteering. Christina has known the girls since they were infants, and now they’ll get to grow up with Cookie and get plenty of practice taking care of a kitten. They started by helping Cookie get into his stroller and taking him for a fun little ride on the trails in Cat World.

A few days later after all the introductions had been made and Cookie had some time to get to know his new person and friends, it was time to head home. Now, the kitten that Cat World caregivers once called a “lucky little cookie” is living in the lap of luxury with Christina and two kitty brothers. Cookie is so happy that, whenever Christina comes home, he prances across the living room to greet her and does laps around the dining room table while she prepares dinner.

For Christina, bringing Cookie home “feels like the stars aligning.” For Cookie, the transition from an abandoned and injured kitten to a beloved, pampered pet is the happy ending he deserves. 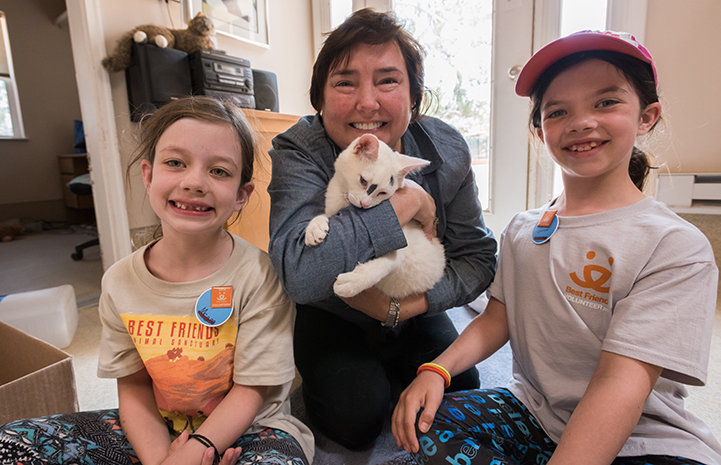 Photos by Kurt Budde and courtesy of Christina Zimmer