Image
Sometimes we pick our pets, but when Jennifer West came to Best Friends looking for a pig, it happened the other way around.
By Sarah Thornton

Sometimes we pick our animal companions, but more often than not it feels like they are really doing the choosing. A shy cat climbing into your lap or a nervous dog relaxing next to you: Pets can be very good at letting us know when they’ve found the person they want. And that is exactly what happened when Jennifer West came to Best Friends Animal Sanctuary looking for a pig to adopt and leaving with the perfect pair of porcine pals. 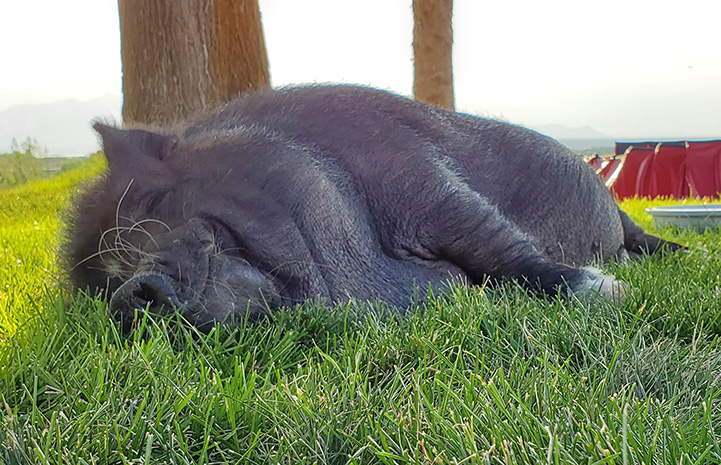 A rambunctious pig and his “boss”

Before he came to the Sanctuary, Diesel lived in a home with a family who loved him very much. But, as he grew up, he got too big for the house and had to move outside. And then, without any other pigs to teach him how to behave, he started to act out and even bite. Rosalie Wind, one of his caregivers, said he was “a typical adult pig who lives alone and gets bored.”

At the Sanctuary, Diesel made a name for himself. He enjoyed spending time with people, but he was still a bit rambunctious and insecure. “He’s such a sweet boy,” Rosalie says. “He’s just really high energy and really emotional.”

He needed a “boss,” another pig he could let be in charge so he didn’t have to make big decisions like choosing the safest place to eat or sleep. He could feel more confident with someone else calling the shots. Along came Papa. 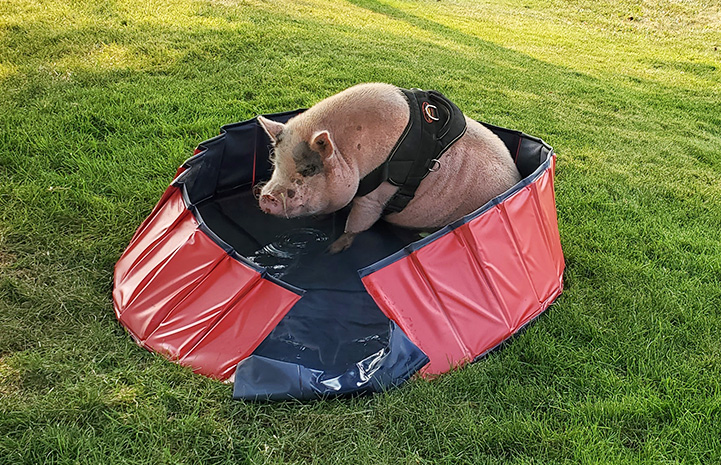 Papa came to the Sanctuary with two other pigs, and after his arrival he moved into the paddock with Diesel. He was the complete opposite of Diesel ― shy with people at first, but after warming up he was happy to cuddle up next to them for a nice calm belly rub. He was just the boss Diesel needed. And soon, they’d both be going home. 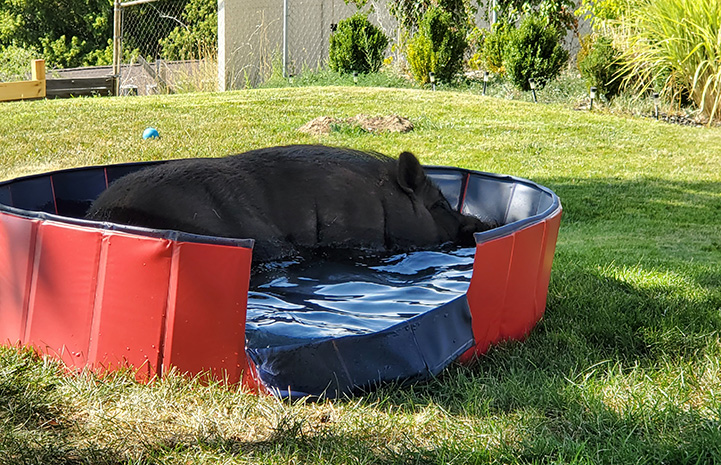 When the pig choses the person

Jennifer had wanted pigs for a long time. She adopted cats from Best Friends in the past and had driven by the Sanctuary in Kanab many times. When she was finally in a place where she could keep a pig, she checked out the Best Friends website to see who was available.

“I read about Diesel,” she says, “and I thought ‘Oh no, I don’t want that pig, because it sounds like he has emotional problems and I don’t know if I want a pig with emotional problems.’ But I went down there and saw him, and just bonded with him … I just had a connection.”

Diesel’s attitude toward Jennifer didn’t go unnoticed by Rosalie, either. The normally high-energy Diesel took an immediate liking to this new person and his behavior around her completely changed.

“He just totally clicked with her,” Rosalie says, recalling the day they met. “He was calm around her and let her sit right with him.”

The pig had chosen his person and changed her mind. As Jennifer learned more about Diesel and his emotional personality, she knew she wouldn’t be leaving without him. And of course Papa ― Diesel’s dedicated boss ― would be joining them. 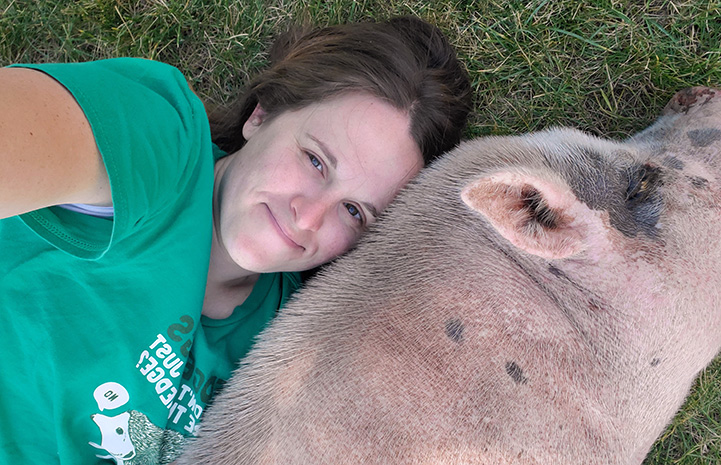 Pigs in (many, many) blankets

Diesel and Papa (renamed Boulder) settled into their new home almost immediately. They each had their own shed to sleep in and a grassy yard to snuffle and root around. When it was warm enough, Jennifer would lay down in the grass, a pig on either side of her, and the three enjoyed the sunset together.

When a mountain lion was spotted in the neighborhood, though, it was time for the pigs to start sleeping inside. And they are loving it. 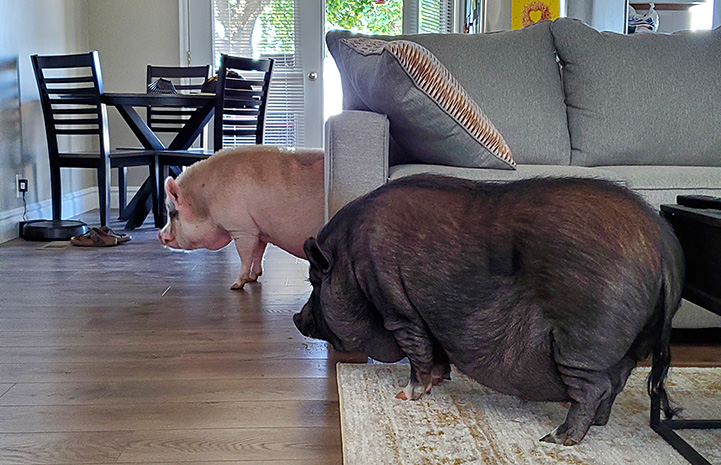 “They sleep in my bedroom,” Jennifer says, “on either side of my bed. They each have their pile of seven blankets, and they take 20 to 30 minutes every night to get their blankets arranged the way they like them.”

Some nights they even try to steal Jennifer’s blanket. And Diesel takes his luxurious nest one step further: He likes to go into the closet and sneak Jennifer’s clothes into his bed. “But then,” she says, “they get settled down and they sleep for 12 hours straight. They snore a little bit, but it’s not terrible.”

When it comes to mealtime, Jennifer says, they have only turned their noses up at one thing. Apparently, cabbage is not to their taste. But scrambled eggs are a beloved breakfast treat, and for a handful of almonds, they’ll go wherever she asks them to go.

Jennifer has tried getting them food puzzles to make their meals and snacks a little more intellectually stimulating, but she says they’re too strong and smart to bother figuring them out the proper way. “They figured out a way to get the treats out without necessarily following the rules,” she says. “They just pull the lid off and then they get their food.”

“I did give them a whole pumpkin and they couldn’t figure it out,” she says. “I don’t think they realized it was food until I cut the top off, and then they just shredded it in two seconds and ate it.”

When they’re not sleeping or snacking, Diesel and Boulder still enjoy the grass out back as well as exploring the house ― though it seems Boulder has decided to stick to the basement after once getting stranded on a rug upstairs. The hard floor was a little too slippery under his hooves, and after he found the rug Jennifer had to make him a trail of towels to lead him back outside.

Diesel, predictably, powers through the slipping and sliding with loud clacking noises, as long as he knows there’s food upstairs. He is definitely the more adventurous of the two and even goes for walks in a harness around the neighborhood where he attracts a lot of attention.

“People (are) following me in their cars taking video,” says Jennifer. “People are hesitant (to meet him) because they don’t know if they’re supposed to or whether it’s OK. Just in case, she carries a retractable back scratcher for people who want to try giving him a scratch. Diesel will walk right up and wait for the scratches and attention. “I think they’re great,” she says. “They’re easier than my cats were.”

Sure, Jennifer can no longer eat in bed without snuffling snouts sneaking up to try to get a snack. But the trade-off is worth it.

Jennifer was picked by a pig and now she has the perfect pair of pigs ― one adventurous and energetic, and the other shy and sweet. Jennifer usually has one on either side of her, whether they are outdoors watching the sunset or snuggling into their piles of blankets for bedtime. They’re balanced and everything is just right. 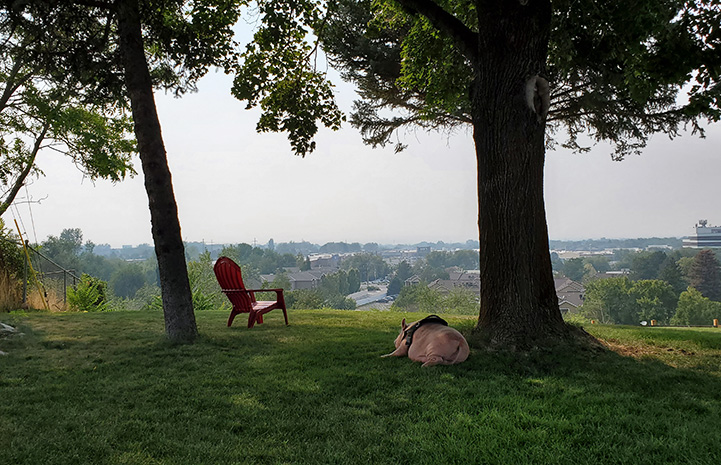 Get picked by a pet

There are pets near you waiting to pick their person. Why not see who picks you?