Second chance for a sweet cat

There’s a little cat living in an Atlanta apartment complex who’s hard to miss. He has beautiful blue eyes, a snowy white body, a tabby face, and he sometimes walks beside his adopter on a harness and leash designed for cats. His name is Hubba Bubba, and while he’s a handsome head-turner who sometimes acts more like a dog than a cat, there’s more to his story than meets the eye.

Two rescue groups were on special cat’s side

Hubba Bubba was brought to LifeLine Animal Project (a Best Friends Network partner organization that operates Fulton County Animal Services) after his family was evicted. He had a large tumor on his ear that looked painful and serious, and it was discovered that he had feline immunodeficiency virus (FIV).

Time was not on Hubba Bubba’s side, but luckily, LifeLine works closely with Best Friends in Atlanta. The staff contacted the Best Friends Pet Adoption Center in Atlanta about taking in the sweet cat who needed extra care and time for adoption. Soon after that call, Hubba Bubba was on his way to the center — and a brand-new life. 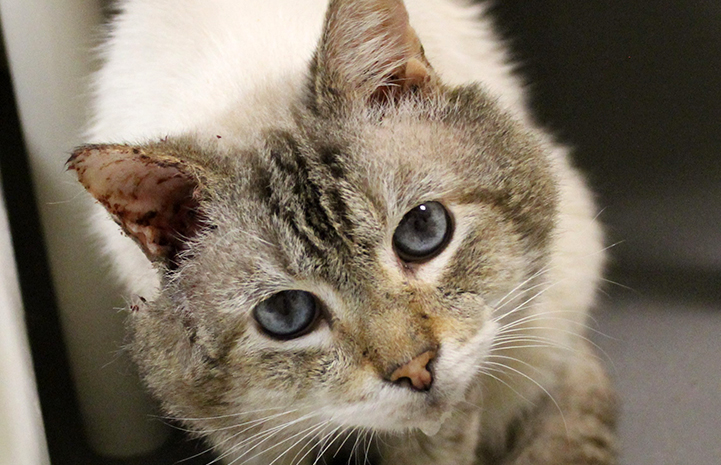 “Helping shelters and animals at risk is what we do,” says Kaitlyn Simmons, Best Friends state engagement manager in Georgia. “The fact that Hubba Bubba was so sweet and friendly was a bonus. We knew there was a special family out there waiting for him.”

A cat with a tumor heals and finds a home

The first order of business was to diagnose and treat Hubba Bubba’s tumor. The veterinarian who removed the growth had good news: It was benign. After some good old-fashioned R & R, he would be ready to go home. 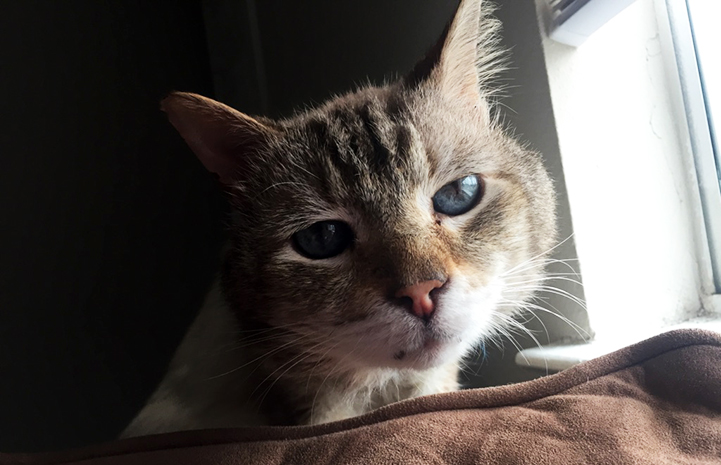 Recovery was swift for Hubba Bubba. Clad with a cone around his neck but looking great nonetheless, he was placed in a large area of the adoption center lobby where everyone could see him. He captured the attention of everyone coming through the front doors — including Megan, who spotted Hubba Bubba while she was looking at adoptable pets on the center’s website. “All I remember are those eyes,” says Megan, who the next day went to the center in search of Hubba Bubba.

At their first meeting, Hubba Bubba came up to Megan as if she were an old familiar friend. That pretty much sealed the deal. Megan had no qualms about adopting a cat with FIV who’d recently had surgery. In fact, Hubba Bubba’s head was still a little swollen from the surgery, but Megan looked beyond the scar. It was Hubba Bubba’s personality that she loved the most. “I liked how relaxed and calm he was,” she says.

When Megan brought Hubba Bubba home that day, he settled in quickly. Now one of his favorite things is meeting friends of Megan and her roommate. He’s feeling and looking great now that he’s almost completely healed from his surgery. 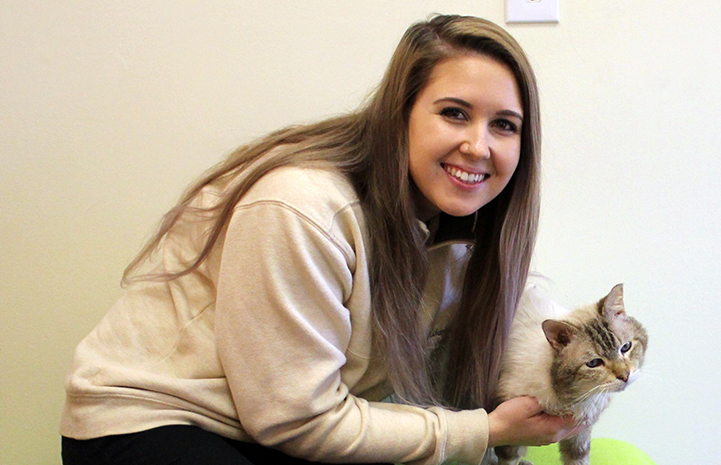 Walking a cat on a harness

When Megan recently purchased a cat harness and leash for Hubba Bubba, she admits she was a little skeptical about her cat enjoying it. But Hubba Bubba learned quickly. “He actually likes it,” says Megan, who each day takes him out to a grassy area at her apartment complex where he can enjoy the sun.

Now Megan is thinking big. She’s planning a walk up a mountain hiking trail, along with plenty of indoor playtime. That’s a lot considering there was a time when Hubba Bubba almost didn’t get a chance to feel the sun on his back or feel the love from someone who gave him a home. Just thinking about it makes Megan even happier that she adopted Hubba Bubba.

“I wanted an animal I could bond with, who could keep me company,” she says, adding that it didn’t matter if there were some medical issues that might continue. “I want him to be happy for the rest of his life — no matter how long that is.”