Image
Find a moment of Zen with some of the Sanctuary’s most peaceful creatures.
By Sharon St. Joan Photos by Molly Wald

Watching Gobi taking a walk in the sun during an unusually warm winter season, we see that she takes her time, stepping slowly across the ground just outside Wild Friends, the wildlife rehabilitation center at Best Friends Animal Sanctuary. Watching her is almost a meditation.

At first glance, it may not look like desert tortoises have much personality, but they have likes and dislikes similar to any other animal. You just have to know what to look for with these special creatures.

Gobi is one of several wild desert tortoises who found refuge at Best Friends after a large tortoise rescue organization near Las Vegas closed several years ago. Desert tortoises are a protected species, and part of that protection makes it illegal to release them back into the wild once they’ve been in captivity (to prevent the spread of a common respiratory condition).

Great care is taken at Best Friends to prevent other wildlife such as hawks, eagles, squirrels and sparrows from becoming tame. They must remain wild so they can eventually be released with all their needed survival skills still intact so that they will be able to live a successful and happy life in the wild.

Because these desert tortoises must always remain in captivity, they are treated differently. It's OK for them to become tame (or not) as they wish. Since Gobi arrived, she's made it clear that she rather likes people.

When Wild Friends supervisor Brianna Vlach first met the tortoises, she noticed that Gobi, who is very at ease with people, was trying to eat her water bottle. She walked all the way around Brianna several times, each time returning to nibble on that bottle.

Chandra Forsythe, a Best Friends co-founder who spends several hours a week with the tortoises, says that what initially surprised her most about them was the way they are able to feel sensations in their shell and that they enjoy being petted. Gobi loves to be gently scratched. And Briana says, “She stands up on her back tiptoes (as much as a tortoise can be on her tiptoes) and leans into the scratch.”

When they first arrived, caregivers tried putting pairs of tortoises together, but all except two of them (who have remained together as a pair) indicated that they’d really rather not share. So, now Gobi and the others have their own large spaces.

Gobi's favorite thing to do is digging inside of her outdoor apartment, which is a lot of fun. One of the caregivers has worked very hard to grow clover in the tortoises' outdoor areas ― planting it, then watering it for several hours a day. It has thrived, much to the delight of Gobi and her companions, and is still abundant in their outside runs, where they live during the five or six warmer months of the year.

Desert tortoises have a lifespan of about 80 years, which means that Gobi likely will have another 50 years of life. Mojave Desert tortoises are a threatened species and can’t be released or adopted into homes, but they can be fostered for life through the Utah Division of Wildlife Resources. (Other species aren’t regulated by state or federal regulations.) Some tortoises even end up in shelters when people can no longer care for them. It takes a bit of expertise and knowledge about reptiles to keep them healthy and happy, but compared to many other animals, tortoises aren’t very difficult to care for.

Gobi munches on her food throughout the day. Her diet includes a combination of veggies: kale, parsley, cilantro bell peppers, broccoli, squash, carrots and prickly pear cactus. She also eats a special tortoise pellet. The chunkiest of the girls, she's just a tiny bit overweight at around seven pounds. But, of course, no one has mentioned that to her.

None of the tortoises hibernate because with the chronic respiratory condition they have, it wouldn’t be safe. They must be awake and breathing, so each morning caregivers make sure that each tortoise is wide awake. Gobi, like the others, sleeps in a basket filled with straw, and when they pull her out in the morning, they make sure she is wide awake (no dozing off). Then she goes directly under a heat lamp for around 10 minutes to get warmed up.

Delightful, lively and responsive creatures: The desert tortoises who call Best Friends home are living out their lives in peace and joy. 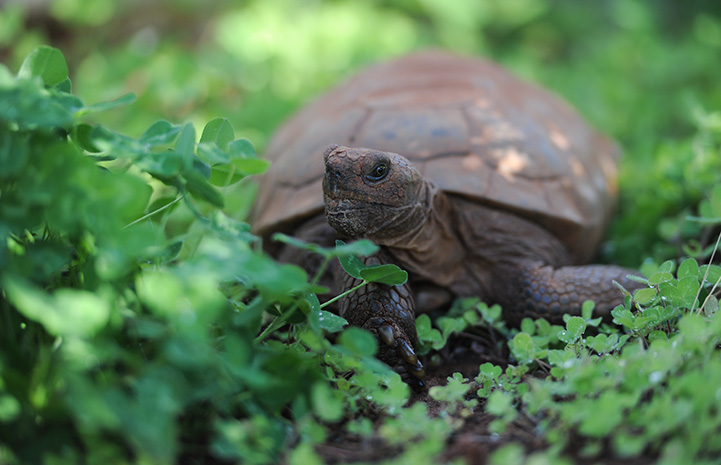 You can join Best Friends in caring for many species of animals (including wildlife) by becoming a member.

Give to the animals