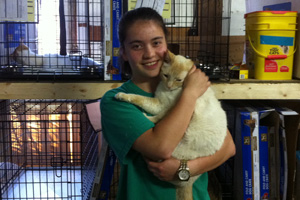 Best Friends Emergency Response team has been on the ground in South Dakota to help pets displaced by flood-related evacuations since late May. Best Friends, along with Code 3 Associates, a dedicated disaster and search-and-rescue organization that responds to human and animal emergencies, has been operating an emergency animal shelter for hundreds of animals at the Pierre Regional Airport.

The Missouri River is dotted with six dams that create reservoirs along its length. The lakes provide hydropower, irrigation, navigation and recreation … and some problems. 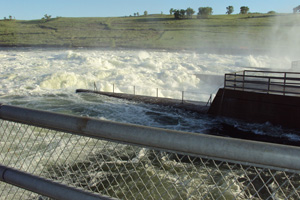 that it has receded into the background of national attention as just another wearying fact of life. Now, only the really dramatic and potentially catastrophic elements of the bigger picture, such as the flood-threatened nuclear power plant in Nebraska, garner primetime coverage.

But, as the snowmelt pumps up water levels in the reservoirs, the Corps of Engineers attempts to calibrate the release of high water to protect the dams from catastrophic failure and the downstream cities and towns from an uncontrolled torrent. The previous record for a water release from the Oahe Dam upstream of Pierre was 90,000 cubic feet per second. Lake Oahe, the reservoir created by the dam, stretches for 231 miles up to Bismarck, North Dakota. That’s a lot of water. The new record for a sustained water release is 160,000 cfs. That flow and the danger it presents to earthen levees and the communities they protect are what prompted the extended evacuation.

Jeff Popowich, Best Friends Animal Care operations manager, was on the ground when the evacuation began. He is quoted in an article 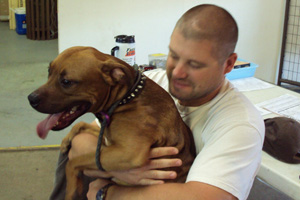 on the local NBC affiliate site as saying, “The families come in, visit with their animals. And it helps the animals. It helps the people. It keeps them connected. Hopefully we will keep the stress levels down. ... I think they are feeling a lot better after they see how their animals are cared for here, and have a little bit more peace of mind knowing that we are going to be here as long as we need to. So they can get their lives back in order and know that their animals will be waiting for them when they get back.”

Current plans call for decommissioning the Air-Pierre shelter, as it is called, on the 6th of July barring additional rains and runoff. Fingers crossed!

Best Friends is privileged to be able to help the animals and their people in such situations. Each family and each animal are a unique story. You can read about some of the Air-Pierre shelter stories on the Best Friends Network.

Please consider a donation to Best Friends today. Your kindness means we can continue all of our work, not just in South Dakota, but here at the Sanctuary and across the country.