Kapowie! Another Victory for Homeless Pets! 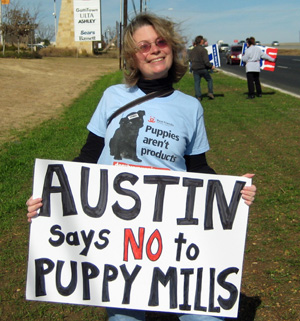 Community super heroes advocating for homeless animals are blazing their way across the country, and yesterday the blaze was red-hot in Austin, Texas. The Austin City Council unanimously passed an ordinance banning retail sales of dogs and cats.

The story of yesterday’s victory really started two years ago when locals heard a Petland was “coming soon” to their beloved Austin. Upset by the news, Spay Austin Coalition sprang into action and, kapowie, 50 people showed up to peacefully protest before the store even opened. For the next two years, Saturday after Saturday, a handful of dedicated volunteers staged peaceful protests against the sale of puppy mill dogs in Austin. The ultimate goal of the team was to convert the Petland business model from puppy sales to puppy adoptions.

Standing outside in the Texas heat (and cold) alongside a busy highway every single Saturday for two years is true commitment for the animals. Six key individuals kept the momentum going: David Lundstedt, Julia Hilder and Sharon Yancy of Spay Austin Coalition; Jennifer Hayes of Best Friends Animal Society; and Pat and Jeanne O’Neil, foster volunteers for Lil' Paws Maltese Rescue. You can read all about their endeavor in the upcoming January/February issue of the Best Friends magazine in the article called, “The Little Group That Could.”

The team’s hard work paid off (well, kind of). Petland did close its doors, but the ideal situation would have been another retail outlet for shelter pets. It’s a humane model that’s popping up in cities across the country and saving thousands of lives from the needless killing in America’s shelter system. 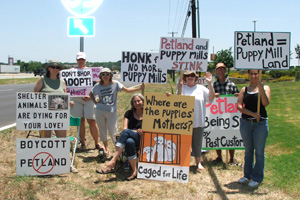 But the capes of these heroes were not ready to be stored away just yet. While peaceful protests are an effective change agent, solidifying this as part of the fabric of the community takes an ordinance shift. Enter David Lundstedt. Inspired by the retail sales ban of puppies and kittens that passed in West Hollywood, California, earlier this year, David went to work on crafting a similar ban in Austin.

The rest is history … oh, except for the 2010 Best Grassroots Activists Award that the Austin Chronicle gave the protestors in its annual Best of Austin readers’ poll. 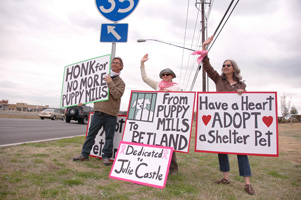 Why are these peaceful protests important? Ask any of the thousands of volunteers across the country currently engaged in protests in front of these pet stores and they will tell you how many unsuspecting members of the public have been educated about the connection between the horror of puppy mills and the pet stores that sell their animals. They can also tell you about the hundreds of people they’ve sent to local shelters to adopt instead of purchase pets.

David and the many other volunteers in Austin have forever changed the landscape for animals, moving us one step closer to the No More Homeless Pets finish line. They are the puppy miller’s kryptonite.

For more information about how to start your own peaceful pet store protest, you can download the Puppies Aren’t Products action kit called “How to Organize a Peaceful Pet Store Demonstration” at puppymills.bestfriends.org. Click on Tools to Use for more helpful resources.