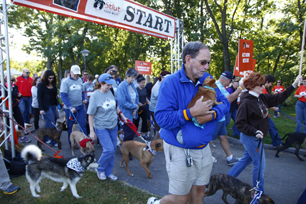 Best Friends’ national dog walk, Strut Your Mutt, raised $1,280,365 for homeless pets, with over $866,000 of that going directly to 153 Best Friends No More Homeless Pets Network partners across the country.

The Strut Your Mutt walk, which began as a local Best Friends fundraiser in Salt Lake City in 1996, went through a makeover in 2010 to become a community resource like no other. Best Friends provides the infrastructure and marketing, while local No More Homeless Pets Network partner organizations in the community where the local walk takes place are able to leverage all that for an efficient, turnkey fundraising and team-building event.

In an earlier post, we reported on the Strut Your Mutt events that took place on September 22. Here is a peek at some of the highlights from the struts that woofed around the course on September 29 in Jacksonville, Austin, Portland and New York. 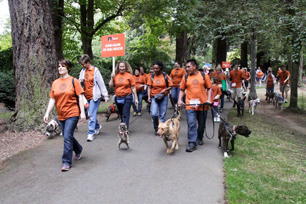 Portland topped $38,000 raised, and it was something of a reunion for several dogs in the walk who had been adopted by Portland residents from Best Friends Animal Sanctuary. Congratulations to Born Again Pit Bull Rescue for rounding up the most pledges and raising the most money for their great work. Portland featured many activities that one would hope to find at a Pacific Northwest event: Downward Dog Yoga by Crunch, Tellington Touch (T-Touch) sessions by Pawsitive Companion, doggie massage by HEAL Animal Massage Therapy, flyball and nose work demonstrations, and fun costumes, too.

It rained buckets in Austin, Texas, but despite flood warnings and loads of puddles, more than 300 dedicated strutters came out. The event netted $86,000, with Austin Pets Alive realizing the biggest slice of the pie at $30,000 to help support their remarkable program that led Austin to no-kill status.

In Jacksonville, where Best Friends is partnering with the city and First Coast 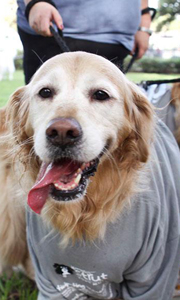 No More Homeless Pets, participants enhanced local resources by more than $30,000 as 545 walkers enjoyed a beautiful day in the Florida sunshine, with Friends of Jacksonville Animals as top fundraiser.

New York City, in its third year of Strut Your Mutt, raised $270,000 for local animals. The Toby Project, an important spay/neuter provider, claimed top honors with over $74,000 raised for their work, passing Los Angeles’ Much Love Animal Rescue (which raised $72,000 on September 22) as the biggest winner in any of the Strut Your Mutt events.

The top “dog pack” was led by none other than Cherry, one of the Vicktory dogs who came to Best Friends after the Michael Vick dogfighting bust. At the Sanctuary, Cherry’s true, friendly and affectionate nature had a chance to emerge. He was adopted out to a great home and is thriving — a wonderful testament to the fact that every dog, regardless of circumstance, is an individual.

If you didn’t get a chance to participate in Strut Your Mutt but would like to pledge to your favorite rescue or to Best Friends, you can do so until October 6. Visit strutyourmutt.org, click on the city where your group is located and select the organization of your choice. Many thanks, and many congratulations to all involved in two bonanza weekends for the animals.