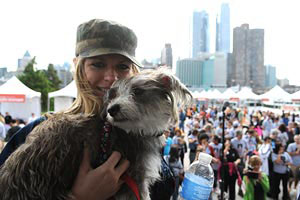 Wow! What A Day. It started with a 5am wake up alarm, and then some pet sitting chores for an old Lhasa and 4 cats at the downtown apartment of Betsy Goldman, president of Friends of Animal Rescue, where I have been camping while in New York. FOAR is a New York City based group that fosters homeless pets and funds medical and other special needs costs for area rescues. They are also one of the Network Charities participating in Strut Your Mutt and their Dog Pack just happens to be in the lead for top fund raising group. I dish out some cat food and take Sweetie, the Lhasa, for a walk. Betsy left Sweetie’s lead on him because he doesn’t like to be touched by strangers and tends to bite, which I guess is why he is still in foster care! We tour his favorite neighborhood watering spots and then I have to dash for the event. I’m supposed to be on stage to do some announcements at 6:30. 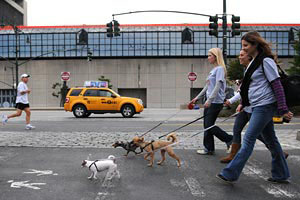 I catch a 6am cab ride with my new friend Mohamed, a very nice gentleman from Pakistan who, along with his partner, has to pay about $665,000 a year for their cab and a taxi medallion lease from the cab company! Talk about high rent. Hats off to the entrepreneurial spirit. I commiserate about the Pakistani floods and he bemoans corruption in the land he left 22 years ago. Nice guy. He gets me to the Pier 84 Strut venue on the Hudson River, at 6:20 am but our amazing volunteers had already been there for an hour! Memo to event organizers: let's push this back a few hours to maybe 9:30 next year...please. Nice to see friends from the Tri-State area, many of whom helped out on the super successful Super Adoption in June.

After a few days of record heat in the city, the weather cooled down for the dogs, and the Pier turned out to be just right for the first Strut Your Mutt NYC. At 8:30, Best Friends CEO Gregory Castle and Mayor's Alliance leader, Jane Hoffman, cut the ribbon and let the dogs and their people loose down the waterfront for the start of the two-mile course. One of the Dog Packs was Rescue Ink. They rolled up on their Harleys and after the walk joined Real Housewife of New Jersey, Caroline Manzo and The Good Wife's Kevin Conway as judges of the various doggie contests. 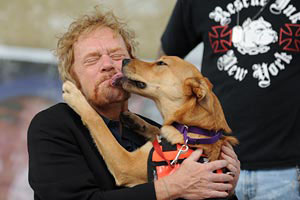 I believe one of the main reasons people love dogs so much is because they are so entertaining. After two consecutive weekends of Strut Your Mutt events, I think I’d have to say that dogs probably feel the same way about us. Hundreds and hundreds of people free to be as eccentric with their pets as they are in their own living room, rescue groups jumping for joy for all the money raised for their local efforts and the Hug-A-Bunny Dog Pack wearing...what else...bunny ears. The thing has a delightfully ding-bat atmosphere.

As always there were lots of model citizen pit bulls doing what comes naturally – being goofy, smiley, wiggly and friendly. Reputations are deceiving. Seeing these dogs you’d never imagine that they are banned in some cities or that shelters anywhere would have a problem finding homes for every pittie that comes through the door. 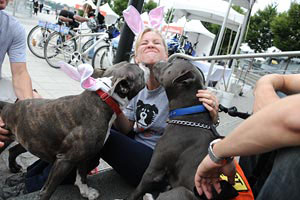 I especially liked the Chow Chow in the tutu, but for an international fashion center, I must say the New York City dogs were not as well attired as their LA counterparts last Sunday, where they were particularly fashion forward. Likewise, I’d say the doggie yoga booth had longer lines in LA but that’s no surprise for a town where yoga instructors probably outnumber pets!  The New Yorkers, though definitely had the edge on their West Coast colleagues in the dog competition department...Best Smile, Best Singer, Best Kisser, Dog / Person Look Alike, etc,...it was a veritable American Idol early round elimination event!

Bottom line though IS the bottom line...over $130,000 dollars was raised for New York area rescue organizations...I LOVE THIS EVENT!