Friends are an important part of life. They make us laugh and they’re there for us when times are tough. Sometimes, they become more like family. For most bunnies (though not all), bunny friends are just as important. Bunnies are choosy about their pals, but bond strongly with the ones they pick. Friends make them feel safe and having another bunny to snuggle with keeps stress down, which helps them live longer, healthier lives. Of course, if they lose a friend, they can become very depressed.

Curly, a small albino bunny at Best Friends Animal Sanctuary, had just lost his own bonded buddy when volunteers Laura Petrosky and Ross Fichthorn first met him. They had their own bunny, Timothy, back home in Pennsylvania, and as they learned more about the benefits of bonding bunnies, they decided to bring home a friend for him. And who better than Curly, who right then needed a friend and a family more than anything?

They adopted Curly, brought him home and the introduction with Timothy went smoothly. The two bunnies seemed to be quickly warming up to each other during their supervised play dates and nose touches through the wire of their enclosures. Unfortunately (and tragically), just before they were to be moved in together, Timothy passed away. The loss hit the whole family. Laura and Ross were heartbroken, and Curly withdrew. Even one of the family cats, who had a particular fondness for the bunnies, was upset by Timothy’s sudden absence.

Not wanting Curly to be alone in his depressed state for too long, Laura and Ross turned back to Best Friends. There, they found hope in the form of Vader, an outgoing senior bunny who had just arrived after losing her home. She hadn’t yet been introduced to any new friends and needed a family. And she was just who Laura, Ross Curly (and Ginger the cat) were looking for. 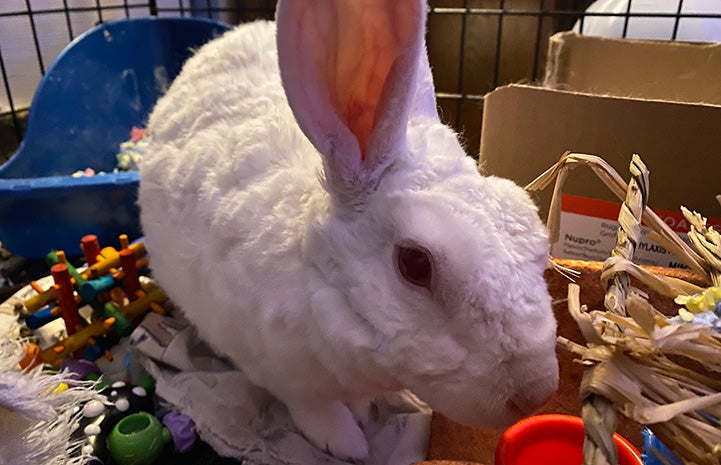 During her entire life with her first person, Vader was well cared for and very well loved. Those carefree early years had turned her into a laid-back, friendly bunny who was always happy to see a new face. But when her person was evicted and faced homelessness, finding a safe place for Vader was a top priority, even if it meant they couldn’t be together.

So, Vader was brought to the Sanctuary. It didn’t take her long to settle in and start bounding right up to people to ask for attention. “She’s just a sweetheart,” says caregiver Sondra Lewis. “If you just start petting her, she’ll hunker down, and you can pet her and pet her until the cows come home.”

While Vader seemed ready to bond with just about anyone, caregivers always want to be careful when introducing new bunnies. Though they often do best with friends, bunnies can be very territorial so, for everyone's safety, introductions are slow and closely supervised. As a brand-new arrival, Vader hadn't yet started making friends, much less move in with anybody, and that's when Laura and Ross contacted Best Friends.

Though she was an older bunny and needed special food for a condition called megacolon (a condition that causes her colon to be dilated and makes it harder for her to absorb nutrients), her bright personality is what caused her to be recommended by caregivers as a potential new friend for Curly. Her adorable little face didn’t hurt, either.

Laura and Ross excitedly welcomed the dark-furred bunny into their home, and soon Vader set to work, not only trying to win Curly over, but also becoming a healing presence for everyone in her new family. 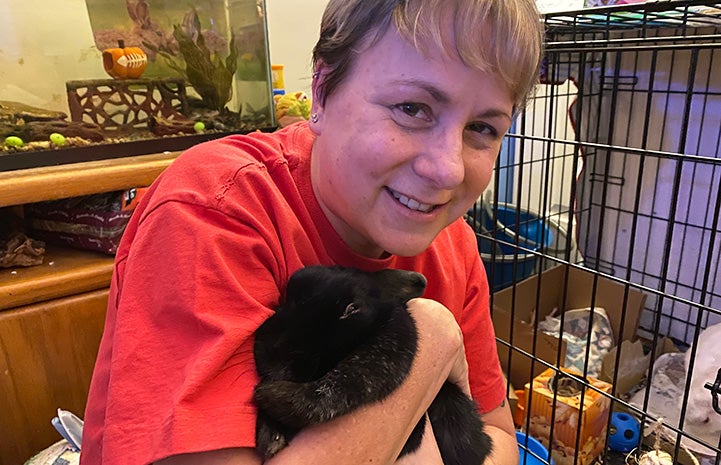 “The bunny situation is interesting, but good,” Laura says, adding that Vader was ready to meet Curly from the moment she got home. Curly, on the other hand, was a little more hesitant. “They’ll go over to each other,” she says, “sniff each other through the wire and everything, but Curly does kind of run hot and cold. Sometimes he’s totally into it and other times he just wants his space.”

The two take turns running around in their room and getting supervised timeout together. They eat politely near one another, and Vader shows respect when Curly wants to be left alone. But they definitely seem to have started sharing their favorite games together. Laura says that Curly has always loved tossing his toys around and stacking them up either in the middle of his space or on top of his food and water dishes. And Vader is following his lead.

Ross is working on a new setup for the pair, which includes a private upstairs where Curly can get his alone time, and a more open bottom level (separated by some fencing) where they can more easily interact when they want to. And then, when they’re ready, that barrier can be removed and they’ll have a whole bunny mansion to share.

Curly is well on his way to forging a friendship with Vader, but Laura says whenever he starts getting comfortable, he ends up spooking himself and backing off. Vader, Laura and Ross have plenty of patience, though. He just needs some time after losing two friends so soon. And while she waits for Curly to fully warm up, Vader’s taking care of another family member who has been missing his bunny buddy. 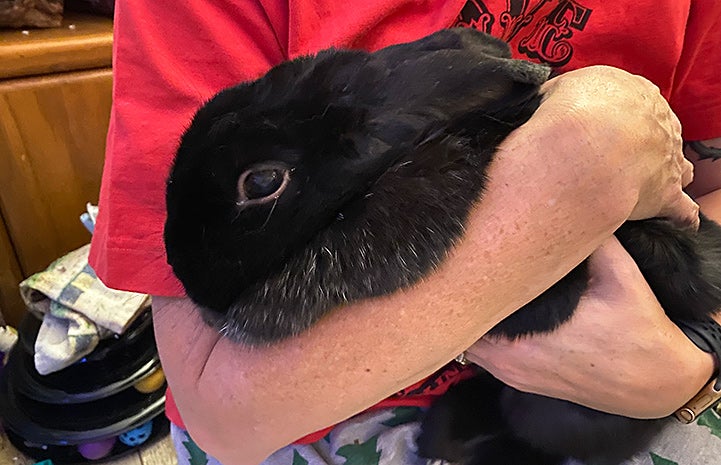 [Making a better world through kindness to animals]

After Timothy passed away, Laura and Ross noticed that one of their cats, Ginger, was losing fur. He had bare patches on his legs and stomach, so they quickly took him to get checked out. Their vet said he wasn't sick and didn’t have any sort of rash or infection, but he did appear to be very stressed, apparently due to losing Timothy.

Though Ginger wasn’t the only cat in the home who loved the late bunny, he was the one cuddled up against him. Curly liked Ginger, but he wasn’t as snuggly as Timothy had been ― again preferring his own space. But when Vader came home, Ginger bonded hard, And Vader was happy for his company.

With a new bunny buddy to curl up to and around, Ginger improved to the point where his purrs started melting away the stress. Vader has even attracted two other family cats, Jazzy and Harper, and he seems quite content to snuggle between them.

Vader’s healing extends to her new people as much as it does her furry family. She’s more than happy to nuzzle up to them, soak up their attention and then return it as love in the form of side flops and a happily twitching nose. “Vader is the biggest sweetheart in the world,” says Laura.

Vader still has a little way to go with Curly, but Laura is sure that with time the sweet senior can win over her new friend. And, like friends do, she’ll be there for him when he’s ready. 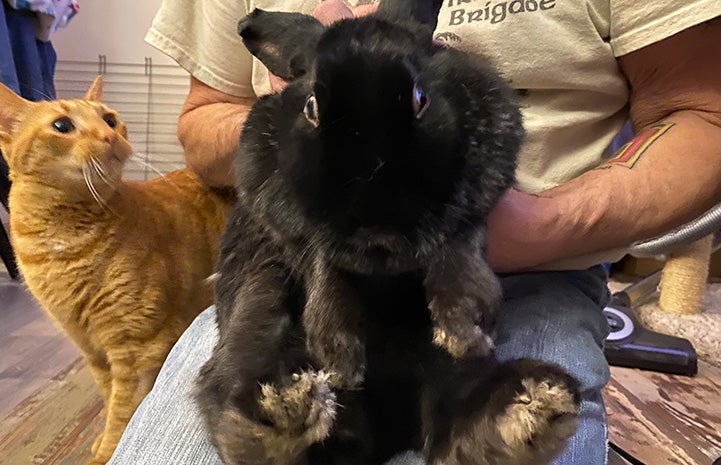 Bring a little healing to your home

There’s not anything much more calming than snuggling up with a furry friend. Why not give it a try?

10 (out of a million) reasons to be grateful for pets