Bruce’s size, excessive energy and lack of manners were three strikes against him until he met a patient foster person who helped him find his match in the Lone Star State.
By Andrea Pitts

Say hello to Bruce, a three-year-old Great Dane-mastiff mix whose giant body and larger-than-life personality supports the age-old saying: “Everything is bigger in Texas.”

Bruce came to Best Friends in Houston from Rosenburg Animal Control and Shelter with a skin condition, an injured tail and an exceptional amount of energy. Best Friends staff decided to place him in a foster home where a more relaxed atmosphere could help him heal and bring his energy level down a notch.

The more time he spent in different foster homes, the more it became clear that Bruce’s friendly, yet full-throttle personality wasn’t going to help him get adopted. He is a big boy who knows what he wants and, back then, he wasn’t afraid to use his giant stature and equally giant personality to get it. If his requests for affection or treats weren’t acknowledged right away, he would throw tantrums and slam his giant body against objects and bark uncontrollably. Simply put, he was a lot to handle. 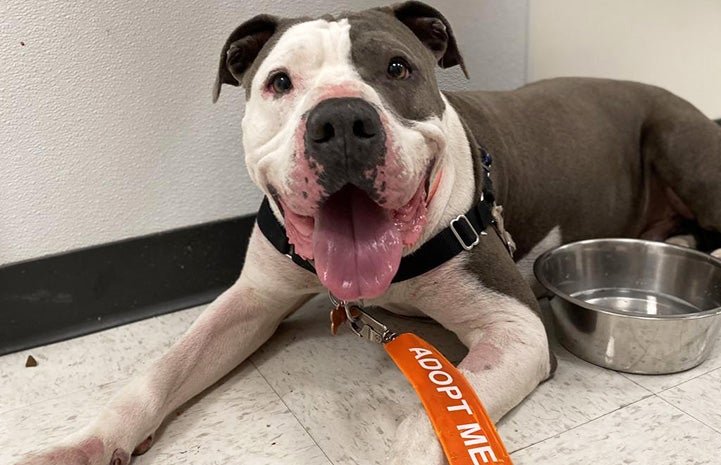 A happy tail (that wasn’t so happy)

Bruce was given special baths to resolve his skin condition, but his tail proved a bit more challenging to treat. He had a severe case of “happy tail syndrome,” an injury that occurs when a dog wags his or her tail against objects so hard that the tip of it loses fur and begins to bleed.

Since Bruce has a hard time staying still, it became nearly impossible to stop him from hitting his tail on anything and everything. This caused the tail eventually to become infected. The Best Friends medical team decided that the best course of action for a full recovery was to amputate about four inches of his tail. This not only removed the injured portion but shortened it just enough to keep what was left of the tail from hitting everything. The surgery worked, and Bruce’s happy tail troubles were finally behind him.

From there, Bruce went to stay with Megan Lee, a coordinator for Best Friends in Houston, who gave him a crash course in manners. Megan has a particular affection for large dogs with even larger personalities and she has helped many from Best Friends access their calmer side. 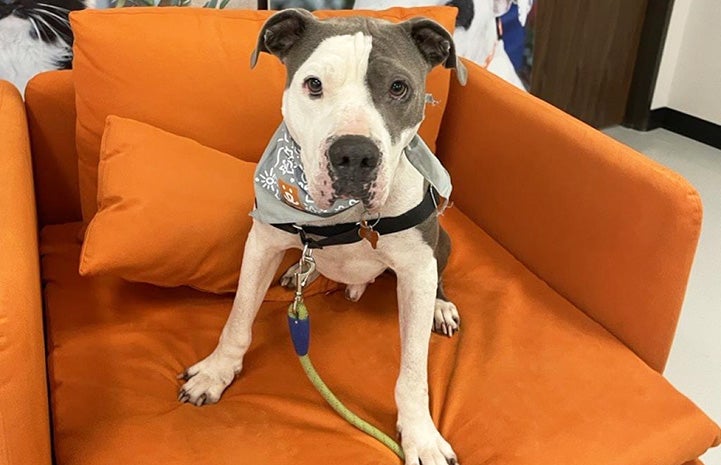 Megan knew from experience that her best line of defense against Bruce’s hulk-like tantrums was to ignore them, but this wasn’t an easy task. She says, “Bruce barked for eight hours straight that first night until he finally got tired and laid down.”

Megan stayed steady with her plan, praising him with treats and affection only when he asked for them nicely. After two weeks of intense but patient training, Bruce began to catch on to Megan’s teachings. The two of them soon developed a trusting relationship. Bruce became much more relaxed when meeting people on walks and at adoption events. Megan and Bruce enjoyed each other’s company for five months before a spotlight story on the news changed Bruce’s life forever. 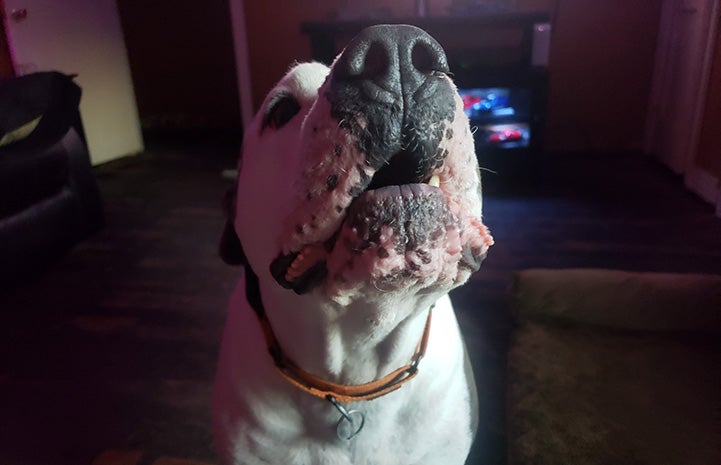 Big dog with big heart gets his big break

Robert Anders will never forget the day he first saw Bruce ― Monday, October 4, 2021 ― when the dog was featured in a local news story promoting a big dog adoption event for Best Friends. There was something about Bruce that piqued Robert’s interest. He thought about him all morning and by lunch time he found himself on the Best Friends website inquiring about meeting Bruce.

Robert had extensive experience with large dogs. Starting in 2009, he had six pit bull terrier-boxer mixes (all at one time) as part of his permanent pack. His current dog, Sabrina, is the last surviving member of his pittie-boxer posse. If anyone could handle Bruce’s high energy and outrageous demands, Robert appeared to be the best man for the job, and a few days later, he arrived at the adoption event eager to meet Bruce in person.

“As soon as Robert saw Bruce, his face lit up and he seemed to fall in love right away," says Megan. "Bruce did his normal barking and running into things. This had scared off other people, so I almost expected the same thing to happen again. But Robert just laughed, grabbed his leash and told him he was a goofy boy. It amazed me from the start.”

After a positive first meeting, Robert and Megan set up a time for her to bring Bruce to meet Sabrina at Robert's home. Megan was cautiously optimistic for Bruce, but there was still a good chance his rocket-like personality would be too much for 12-year-old Sabrina.

“The moment we walked into the backyard, Bruce and Sabrina hit it off. Both dogs were sniffing each other, and Bruce had the best happy dance going on,” says Megan. “Once they seemed comfortable, we let the leashes go and it was like they had always lived together. It made me cry knowing he was so comfortable there.” 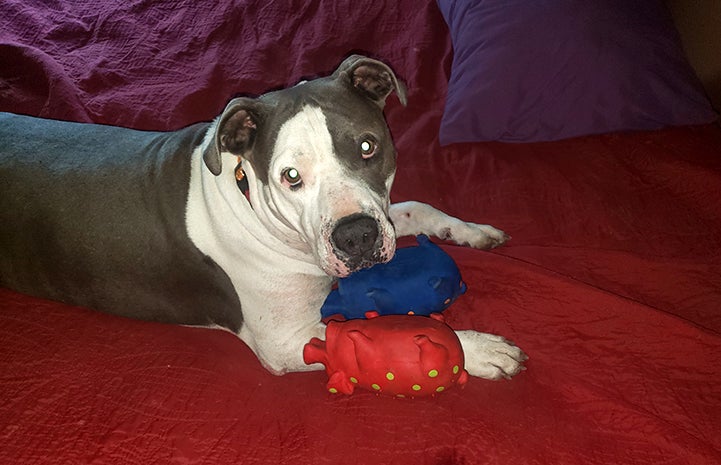 Bruce’s personality hasn’t changed much since finding his forever home. “Bruce is very loveable but describing him as a ‘handful’ is like describing an EF5 tornado as a little wind,” says Robert with a laugh.

[Sweet lullabies help a puppy heal and find a home]

Bruce loves to play ― all day, every day. Robert can rarely get a good picture of his face unless he’s sleeping. The rest are usually blurred action shots, taken as he’s flying past the camera and into the pool or on a mission to find hidden toys and treats.

Bruce is also still very chatty. “He talks to me all the time and if I ignore him, he not only speaks louder but he comes closer.” says Robert.

Having had six large breed dogs at once couldn’t even begin to prepare Robert for the high-octane energy that lives inside Bruce. “Adopting Bruce was one of the best things I’ve ever done. There isn’t a doubt in my mind he is as happy to be here with me as I am to be with him,” says Robert, proving that there is someone wonderful out there for every equally wonderful dog. 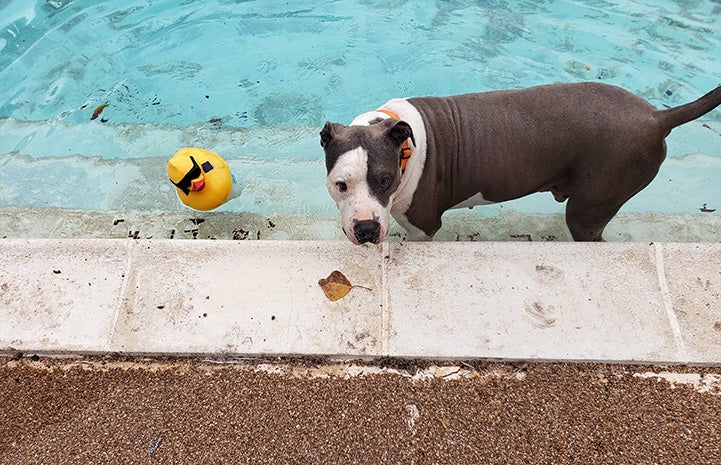 Whether you’re ready for an energetic house guest or someone who’d rather curl up on the couch, you’ll find the perfect pet at your local shelter.

The myth of the perfect adoption