It wasn’t easy to find Sasha a home with someone who could handle her, until Jacob came along.
By Sarah Thornton

Sasha the “sun bear” (as she was sometimes known due to her striking fur pattern), never had a problem catching the interest of potential adopters. With her unique looks, she had a way of catching people’s eyes. But most of the time, things never went beyond that. She was just a bit too much for most families.

Sasha is shy around new people and she takes a long time to warm up, while at the same time having separation anxiety that drives her to try and escape by digging under, jumping over or chewing through fences — not ideal for settling into a new place. For this, she had a GPS collar and was on medication to help with anxiety.

Sasha also needed to be the only pet. She’d already been adopted and returned once for not getting along with the other animals or children in her home. And because most people who love animals already have a pet (or want that option in the future), it was tough to find a new family that could have Sasha as their one and only.

With the people she trusted (caregivers and returning volunteers with whom she’d forged friendships), Sasha was a sweet dog who loved going out for walks and car rides; however, because of her special behavioral needs, her options for a new home were limited. Then along came Jacob, who fell for her fluffy face and was not only willing to give Sasha a chance, but he was determined to make sure that, at last, she would have a safe, secure and loving home. 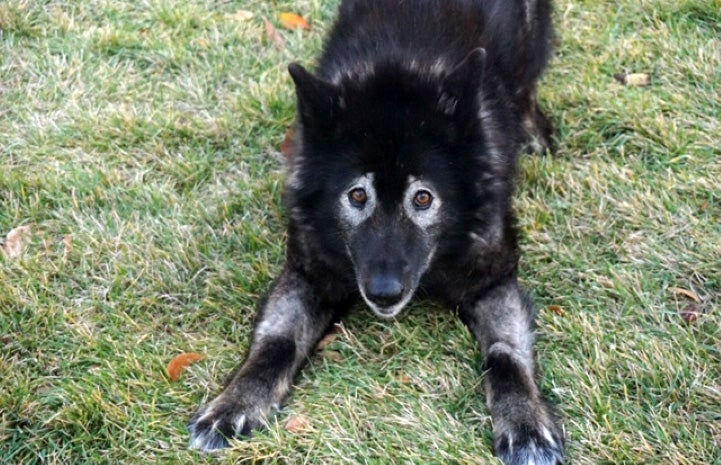 A home for an anxious escape artist dog

Sasha was found as a stray wandering on a quiet country road — with no microchip and no one coming to claim her after she was picked up. So, it’s unclear if she ever lived in a home or how much contact she had with people. She spent some time in a foster home, but with her anxiety and escape artist ways, a secure room and yard at Best Friends Animal Sanctuary ended up being her safest option. There, she’d have the space and time needed to get comfortable and relax.

Over time and with a gentle approach, she started opening up to the people she saw every day. She howled with excitement when her caregivers arrived in the morning, and she quickly fell in love with car rides and quiet walks. Sasha was a popular pup among those who knew her. But, again, she had little luck being matched with a family that could handle all her needs.

A woman who came to the Sanctuary to adopt a cat ended up kick-starting Sasha’s journey home. She was, like so many others before, immediately interested in the pretty pooch. But because she was unable to adopt Sasha, she contacted a friend who was looking for a dog.

Jacob wasn’t looking for just any dog. He was looking for the right one. And Sasha had caught his attention. Before he knew it, he was planning a trip to the Sanctuary. Their first meeting was a quiet one, with Jacob sitting on one side of Sasha’s room and her on the other, just watching each other. Shy Sasha wouldn’t approach the new person, but Jacob could tell she just needed time and a little extra attention.

Thinking back to his initial talk with adoption coordinators, Jacob says: “It was kind of funny, but Sasha just came with a lot of disclaimers. Sasha’s an escape artist. Sasha does this. Sasha’s on medication. Sasha, you know, may not be good with other pets ― all these things. And I was like OK, I’m cool. I’m still good. What else you got?”

Undaunted by things that had turned other adopters away, Jacob was ready to take Sasha home ― right after he made some big adjustments to his backyard. “I wanted it to work,” he says. “So, I spent the next few months making my yard Sasha-proof.”

He studied the yard she had at the Sanctuary and did his best to replicate the design at home. He ordered “coyote rollers” (designed to prevent coyotes from climbing fences) for the top of the new fence, so she couldn’t climb over. He buried the bottom deep in the ground so she couldn’t dig under. And all of that was still within a larger fenced yard. He even had a doghouse custom-built for Sasha, so that she would have a safe, insulated place to hide and nap when she needed it, since she was more comfortable outdoors than inside.

With construction complete on Sasha’s new yard-to-be, Jacob was ready to bring her home. 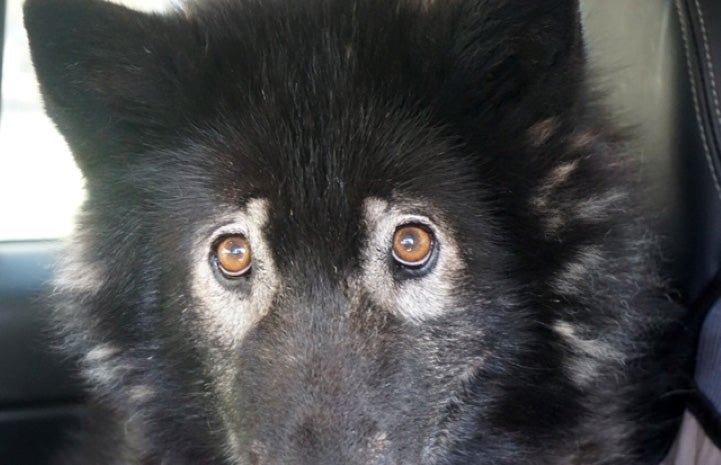 Sasha finds her place and her person

The ride home was an easy one because, after all, Sasha loves being driven around. And when she got to her new home, she rolled and played in the grass and settled right in, like she knew she was finally where she belonged.

Jacob started spending all of his time outside of work with Sasha by his side. They went on multiple walks every day and at least one car ride. “If we’re doing our walk and we’re heading back to the yard,” says Jacob with a laugh, “she’ll stop at the car and she’ll just kind of plant her butt down right by the car, and I know exactly what she’s saying: ‘I want to go for a ride.’”

Any open vehicle door is an invitation, as far as Sasha is concerned. She’ll crawl in when Jacob goes out to get something from his car, and she’s even tried to sneak into a visitor’s car after returning from a walk ― anything for a ride.

With the quality time and attention, Sasha soon went from quietly watching Jacob across the yard to following him everywhere like a shadow. She’ll sit right next to or behind him, and on walks she sticks close to his left side at all times. If they’ve been apart for any amount of time, she loudly howls her excitement as soon as she sees him. “I guess I’m her person,” Jacob says. “And I found my dog. It’s mutual.”

Now she’s so comfortable that she’ll happily play a game of chase with him around the yard. And even though she’s not quite caught onto the concept of “fetch,” she’ll run after and pounce on anything he throws for her. Her goofy side certainly came through when she splashed straight into Jacob’s koi pond, watching as the colorful fish curiously circled around her ankles. (She needed a bath after that little adventure.) 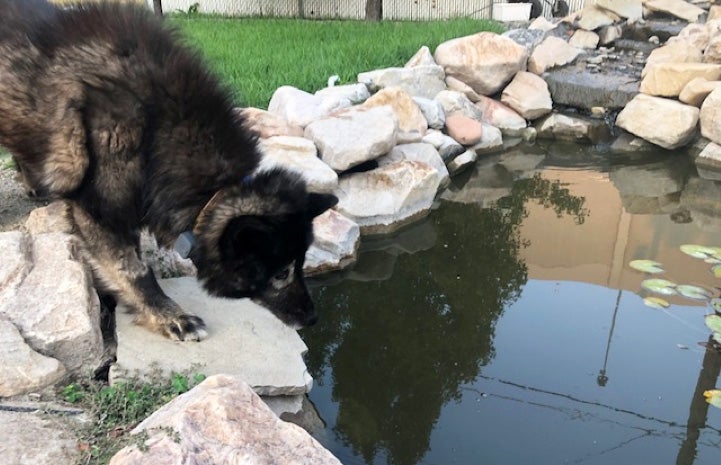 Outside, Sasha gets compliments everywhere they go for her beauty and behavior. On their very first trip to the pet supply store to pick up food, Jacob says one of the employees commented on her good manners. “I was just thinking: This is such a trial, you have no idea,” Jacob recalls. “(It was) a new experience for her. I was kind of on high alert.”

She joins in on family activities and goes with Jacob to relatives’ homes for dinner, always glued to her person’s side and on her best behavior. After talking with their veterinarian, Jacob has even been able to lower the dose on Sasha’s anxiety medication. She is flourishing.

Though Sasha isn’t big into snuggling or shows of affection, Jacob thinks she may well be on her way. She’s getting more and more comfortable around her new family and the inside of their home every day. She just needed someone to look past her list of disclaimers and give her a chance to get there.

“It didn’t scare me at all,” Jacob says of that disclaimer list. “If you give them the attention and spend time with them, that’s really what they want … (Getting her) is really the best decision I’ve made in a long time … I don’t regret it for a second. I actually can’t imagine, now, not having her.” 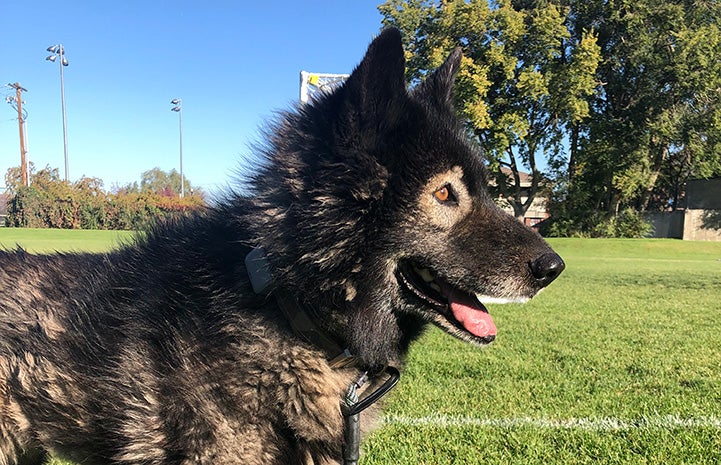 Every pet is just looking for somewhere to feel safe and relaxed. Maybe that place could be with you?