Once abandoned mama dog gets new, fun, fabulous life on a farm

Adopters, a foster home and Best Friends staffers go the distance to bring sweet Willow to full health and into a wonderful forever home.
By Lindsay Hutton

Lea White has always lived with animals, from horses and ponies to barn cats, house cats, goldfish, birds and dogs. She and Don, her husband of 35 years, live on 21 acres in the rolling hills around Republic, Missouri.

Through the years, dogs came to them in many ways. In one case, while riding their horses, they encountered Elvis, a black Shar-Pei, and were asked by the woman who had him if they would take him in. They said yes, and she drove Elvis to their house. But when Elvis died this past September, they found themselves without a dog for the first time in a while. Being the animal lovers that they are, they decided to look for a dog who needed a good home.

Takhi, an 86-pound Shar-Pei, was named for Przewalski’s horses, the ancient wild equines also called takhi, the word for spirit in Mongolia, the only place where the horses are found. The big fellow immediately formed a formed a deep connection with Don. Anywhere he went, Takhi was sure to follow, even if it meant jumping a fence.

Lea and Don thought Takhi should have a playmate. And feeling fulfilled by their efforts to give Takhi a good home, they were both ready to help save the life of another dog. They wanted to “give (another) dog a fun, fabulous life,” says Lea, and so they decided to begin searching within a 100-mile radius for their new companion.

It turns out that the dog they were looking for would fall just outside that limit. Willow, a sweet Shar-Pei mix mama with six puppies, was 106 miles away in Bentonville, Arkansas. But when the right dog is there waiting for you, time and distance don’t really matter. 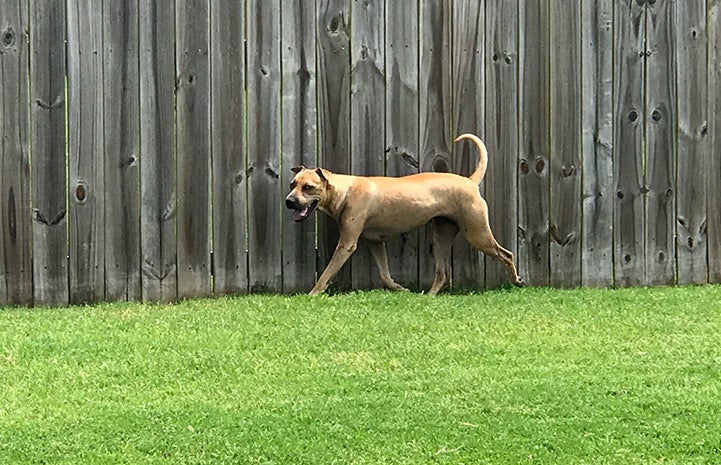 A fresh start for a mom and her babies

Back in early May, Willow and her puppies, only a few weeks old at the time, were transported from a shelter in Pine Bluff, Arkansas, to Best Friends in Northwest Arkansas. “We were all pining over the little babies,” says Best Friends supervisor Ronni Weber, “And Willow was amazing.”

It turned out that Willow was already potty-trained and, like her name, pliant. She calmly went with the flow. Nothing troubled her. She got along well with other dogs and cats, had no negative reaction to kids or people and was well-behaved without any training. But Willow was also heartworm positive. She was also thin at just 32 pounds and had considerable hair loss. Before she would be officially up for adoption, she would need help for her heartworm and would have to gain some weight. 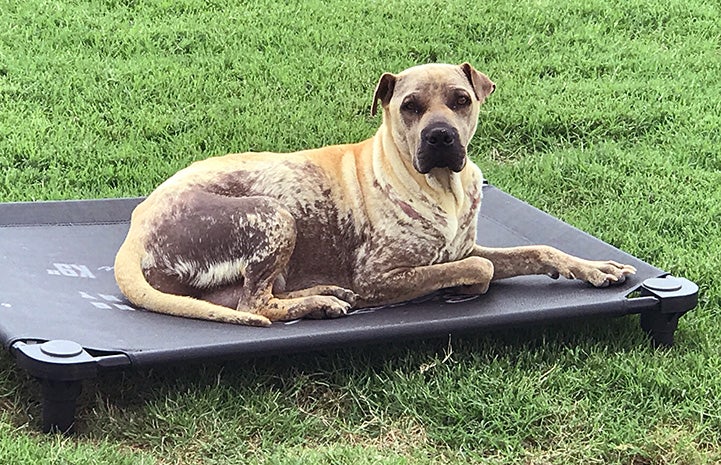 [Inspired by one extraordinary dog to adopt another]

Six puppies — adorable, cinnamon-colored little loves with wrinkly cheeks ― and a mama dog in need of medical care might sound daunting, but longtime foster volunteer Judy Barton stepped up, drawing on her experience with foster dogs in need of medical help. She had already cared for her beloved Akita named Kuma, who became a foster win after nine months in her care. She had three foster wins and loves them all, but Kuma held a special place in her heart. When he died last February, she was crushed. She hadn’t fostered in a while, and this loss propelled her back toward fostering again. 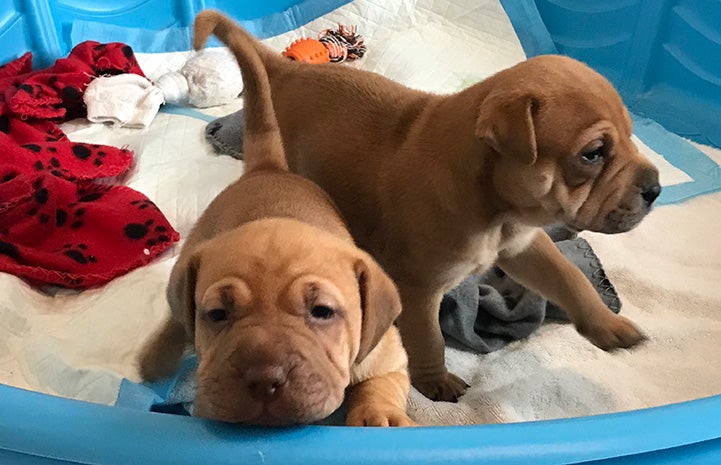 For all her fostering experience (which included caring for pets with medical needs, including seeing a dog named Jake through a leg amputation), Judy had never fostered a mama dog with puppies. While there was the challenge of having nine dogs in the house (with two of those foster wins still with her), Judy worried about Willow being so thin. Her experience, coupled with medical support from Best Friends, led to a good start for the pups and a brighter, fuller future for Willow.

Judy says looking after Willow and her pups was all a matter of keeping a close eye on them and trying to read what they need. She made sure that Willow got lots of naps, plenty of sun and had enough food that was appetizing to her. “I fed her all the time,” she says, “and it still took about six weeks for us to get enough weight on her that she seemed to be thriving again.”

Fostering pets with medical needs isn't difficult, says Judy. It’s just about being in tune with them. Did Willow want kibble? Did she want some broth? Some milk? By the time Willow left Judy’s care, she weighed more than 50 pounds. “When I think of Willow, my heart gets big,” says Judy, who loved watching Willow go from being malnourished to flourishing and caring for the cute, spunky pups.

Willow kept a watchful, loving eye on those kiddos. If one of them so much as groaned in sleep, she checked on them. When the puppies chewed on her face or pulled her ears, she offered only gentle corrections. She was a fun mom who played tug and other dog games. And when she got tired, Judy made sure she could take a break, take a nap and have a snack.

The pups stayed with Judy for five weeks before briefly being placed in other foster homes and quickly being adopted. And within five days of Willow being officially up for adoption (after completing heartworm treatment and being spayed), there was serious interest from someone in North Carolina. When that potential adoption fell through, it felt like a setback; however, it gave Lea just the right amount of time to act on the pull she’d been feeling toward the dog.

Lea had been searching and reading about different dogs on Petfinder. She searched so much that a common conversation between her and Don went something like this.

Don: “Are you on the phone again?”

And she did. When she read about Willow and saw her, she had that feeling. 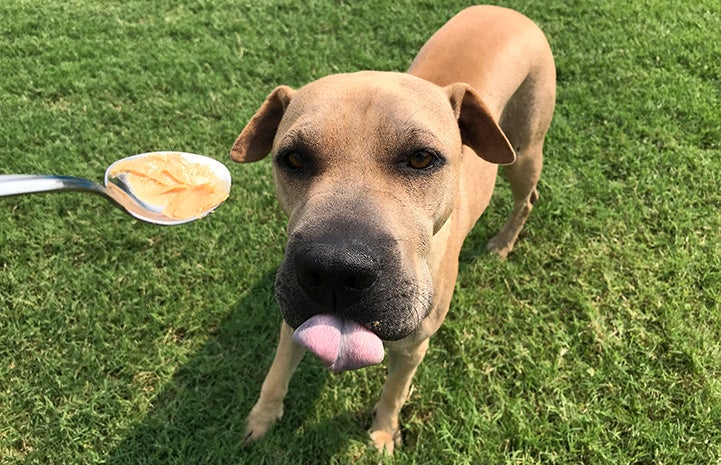 A long journey to a new, fabulous life

Lea contacted Best Friends, which put her in touch with Judy. After a phone conversation about Willow, Lea and Don decided to take the chance and make the 106-mile trip to northwest Arkansas. Twenty minutes after meeting Willow, they knew without a doubt that they’d made the right decision. Willow’s friendliness and acceptance of them radiated like warm sunlight.

Takhi and Willow became instant friends. Willow’s playful, easygoing manner made her a good fit for the active two-year-old. Lea and Don say that watching them play brings big laughs and joy. And when Takhi and Don leave together, Willow is content to be with Lea, who loves that her dog is affectionate but not needy, alert but not aggressive and trustworthy when she's left indoors alone and unsupervised. Everything about Willow, she says, is awesome.

[Making a better world through kindness to animals]

Willow is so awesome, in fact, that the Whites decided to adopt again. They’ve recently adopted Ginny, a two-and-a-half-year-old who's about Willow’s size and height. The social Willow loves her new playmate. And all three dogs not only get along but they also have their own couch.

The three dogs, the Whites, their horses, goldfish, birds, cats and barn cats are happy on the farm; however, it's not just a happy ending for Willow, Judy, Lea and Don. Ronni says it’s about the happy ending waiting for each pet in need of a home. The time and distance to the right home can vary, but that home is there, waiting. 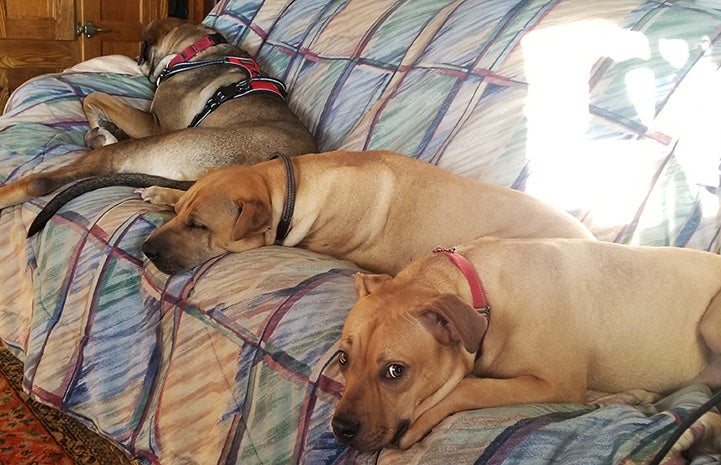 Adopt and help save lives

Visit your local shelter to meet dogs who would love to be a part of your family (no road trip required).