Inspired by one extraordinary senior dog to adopt another

By Nicole Hamilton December 29, 2021
Photos by Lori Fusaro
After fostering a dog who required a little extra time to get used to living in a home, a couple is inspired to adopt another with the same need

Ease hasn’t always come easy for Molly. When the senior Labrador retriever mix was at Best Friends in Los Angeles, she was known for being exceptionally shy around people she didn’t know. She was shy around other dogs, too, and had a reputation for keeping her distance in the play yard.

Over time, Molly was adopted and returned to Best Friends a few times. Usually, she came back after her adopters couldn’t help her move fast enough beyond her shyness and awkwardness around pets and people. But each time things didn’t work out gave the team a chance to fine-tune its search for a home where Molly could truly thrive.

Meanwhile across town, Madison and Matt Rohde were thinking it was time to foster a dog once again from Best Friends. Recently, they opened their home (and their hearts) to foster a wonderfully quirky senior dog named Harvey Milkbone, and lovingly cared for him until he passed away.

[10 (out of a million) reasons to be grateful for pets]

Saying goodbye to Harvey was tough, and when they were ready to foster again, they decided they wanted to help another dog. So, they contacted the foster team to ask if there were any dogs who, like Harvey Milkbone, were having a difficult time landing a home they could have free to themselves. One dog came to mind right away: Molly. 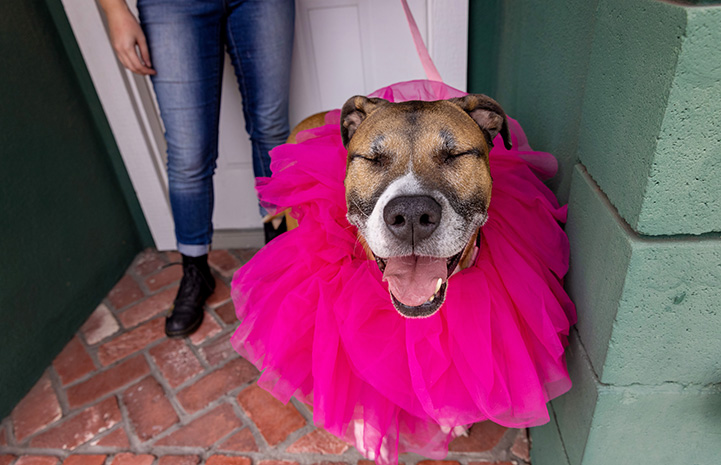 Lessons from a free-spirited dog

Molly first came to Best Friends back in 2016 from a Los Angeles Animal Services shelter. To help ease her fears around dogs, the dog behavior team matched her with fellow dogs with similar energy levels, and that seemed to do the trick. Over time, Molly began to play with other dogs and loved to chase or be chased; however, around people her shyness was a bit more stubborn and tended to give way to an awkwardness that left potential adopters baffled.

“She’d sometimes display conflicting body language when meeting new people,” says Amanda Yocom, supervisor of lifesaving and care. “She would often appear to want her belly rubbed but would react when people would try to touch her.”

Once Molly learned that she could trust someone, she gave them an all-access pass to belly rubs. “Molly has always been gentle and great with people,” says Amanda. “It just takes her time to warm up.”

What she really needed was a place where her unique personality would be celebrated, and where there would be no time limits on her turnaround from a shy to a confident dog. It was perhaps a tall order for most foster volunteers or adopters, but not for Madison and Matt. They’d recently taken a master class taught by Harvey Milkbone on how to foster a dog marching to the beat of his own drum. And they passed with flying colors. 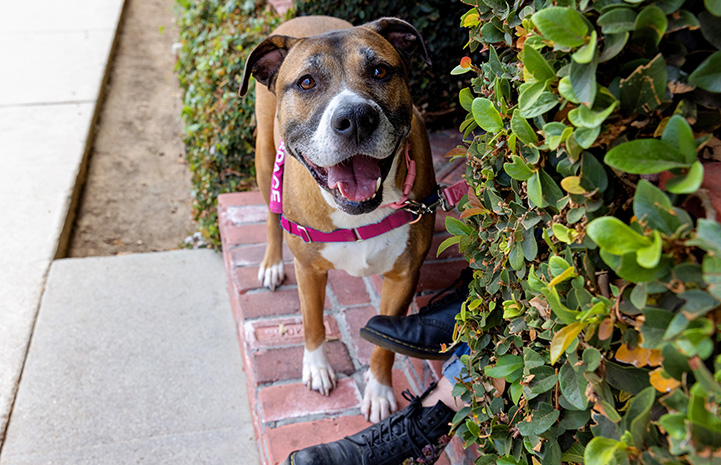 From just coexisting to belly rubs

Before Madison and Matt started fostering Molly, they attended a few training sessions with her and Amanda. These not only helped Molly feel more comfortable with them, but it also gave them a clear idea of what was in store for them once they brought her home.

When the couple met Molly for the first time, she was so shy that they thought she didn’t like them very much. They took it slow, letting her approach them. Eventually, they worked their way up to taking her harness on and off after a walk. But what really helped Molly come around was simply ignoring her.

“The first day we met her we didn’t look at her. We just coexisted,” says Madison. “And the first time she rolled over and asked for belly rubs we just ignored her. It helped her realize we wouldn’t be in her space, and that we do respect her.” 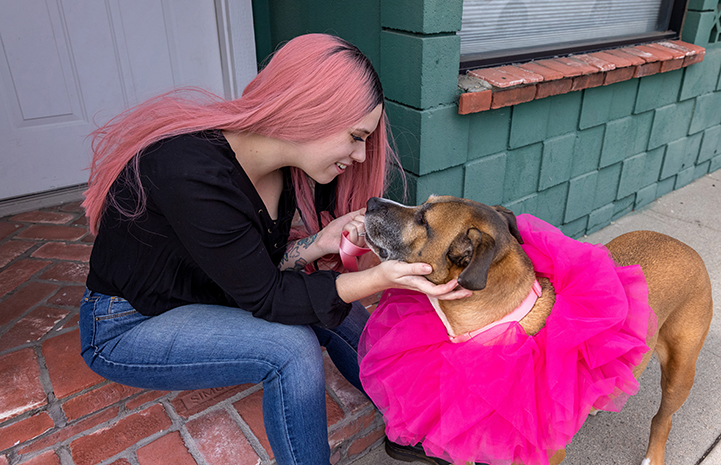 On the very first night in her foster home with Madison and Matt, she jumped into bed with them, even though during the day she teetered between letting her guard down and keeping it up. Says Madison: “She tolerated us at first, but it was like she knew we were there for her. She realized we liked her.”

Within a few weeks, they got the impression that Molly thought she was already home. A few months later, they realized that each time a meet-and-greet with potential adopters didn’t work out, they were relieved. They didn’t want her to go anywhere. So, they made it official and adopted her. “I kept telling myself we were just going to foster her,” says Madison. “I just couldn’t admit that I didn’t want to her get adopted by anyone else.”

Today, Molly is especially close to Matt, who calls her his “dog-hter” (doggie daughter). She plays with toys like a dog half her age, and she’s managed to put on a few pounds. “She just seems so much happier now,” says Molly. “Before, she was skipping meals.”

She’ll do anything for treats, has mastered a few more manners, and is even getting used to the elevator in their apartment building — something that before was a source of anxiety. And while she is still tentative around people she doesn’t know, she gives serious consideration to those who want to pet her. 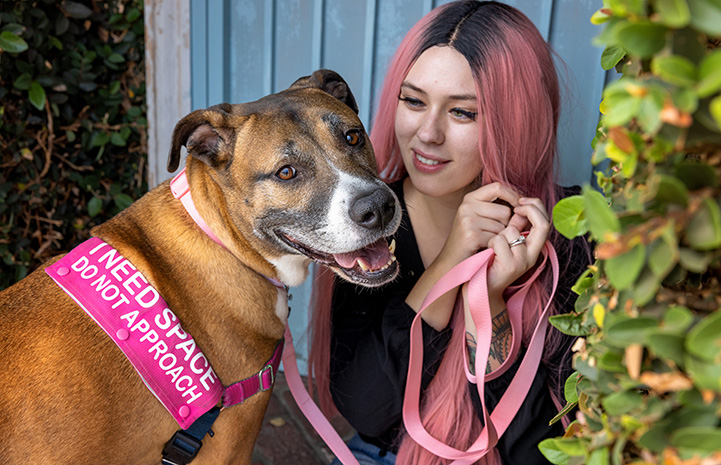 Recently, a friend of Madison and Matt’s came over and Molly walked up to greet him, then rolled over for belly rubs. This was a big moment because the first time she met their friend, she had to be on her leash when he walked in the front door. And while he visited, Molly stayed in her crate to feel safe.

It’s all worth it, says Madison, because at the end of the day Molly has brought so much to their lives. On walks, Madison often finds herself telling people not to pet Molly without asking. It’s taught her how to speak up for herself, which is something she had a hard time doing before.

Madison says, “We have more structure now. We like going for walks together in the morning. It’s a good start to the day. We feel like a family. And Molly feels like this is home, and her contentment radiates to us.” 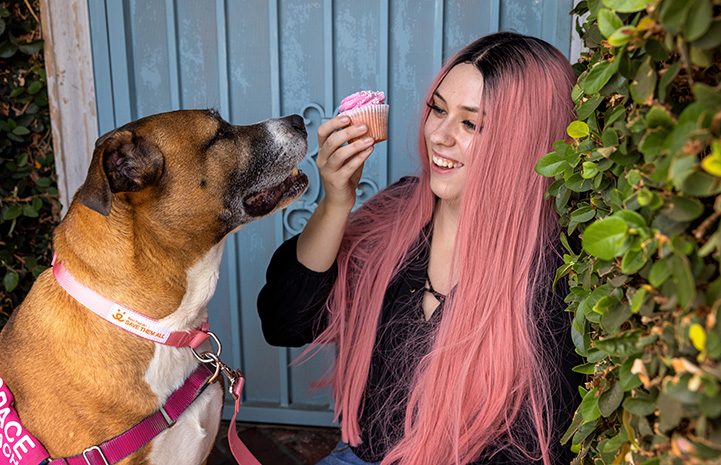 Have room to spare?

You can help pets feel at home while they’re waiting to be adopted ― by becoming a foster volunteer.