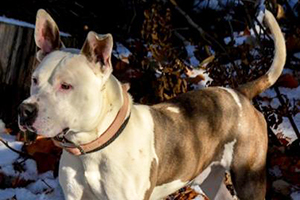 It’s going to be the best Valentine’s Day for a pit bull terrier named Batman. No, he hasn’t gotten a cool, new gadget for fighting crime. He hasn’t scored one on any bad guys.

He did score a home, though. That alone was a tough challenge for this beefy (his name is Batman after all), energetic, go-for-broke youngster. As if his unbridled exuberance wasn’t enough of a hurdle, there’s also the issue of his home city banning dogs of his breed.

But he got plenty of help on both fronts at the bat cave, otherwise known as the Yakima Humane Society, in Yakima, Washington. And when the organization started hyping up The One adoption campaign, a nationwide Best Friends adoption promotion, it was just the widespread publicity he needed to charm a family.

Since February 1 people around the country have been adopting furry friends for just $14 from all Best Friends locations — the Sanctuary and the pet adoption centers in Los Angeles, Salt Lake City and New York, as well as from some 200 participating No More Homeless Pets Network partners* (like Yakima Humane Society) across the country.

Nicole Papageorgiou, outreach and education manager for the Yakima Humane Society, says the group tried promoting Batman, a handsome pit bull terrier mix, on its Facebook page before. But showing him in conjunction with The One promotion with a reduced adoption fee generated more interest.

“He’d been with us since last November,” she says. “He was full of life and energy, but clearly had never had a family who showed him how to be the family pet.”

And it would definitely be a while before he knew how to be someone’s pet valentine.

A pit bull Valentine in training

Batman was a true diamond in the rough when he arrived at the Yakima Humane Society. But a dedicated shelter volunteer decided to make Batman his personal project and show him the ropes for successfully navigating the human world.

“One volunteer came in daily and worked with Batman, which took a lot of energy and time,” Nicole says. “He’d have to run with Batman for 15 minutes before even thinking about trying to get him to walk nicely on a leash. He also had to get Batman to stop eating the leash.”

To make matters more difficult for Batman, it’s also illegal for families to have a pet pit bull terrier in the city of Yakima. Because of the law, Batman couldn’t leave the shelter property — leashed or not. So, Nicole says, he never got to walk very much or very far and it meant he couldn’t be adopted to a family in the city either.

But Batman was young — estimated at just over a year old, smart and eager. And things did start to click for him.

‘The One’ for Batman

Even though the list of must-haves for a successful adoption was daunting, there is absolutely a home for every pet. That includes Batman.

“He needed a home with no other dogs and no cats due to his high energy, and he needed a home outside the Yakima city limits,” Nicole says. “And he got one.”

She says the perfect family saw Batman on Facebook, fell in love and even called in to put a hold on him. When they got to the shelter, Batman worked his magic and everyone hit it off great. And now he can burn his own excess energy with the family’s kids, who are thrilled to have a new friend.

A legacy of love 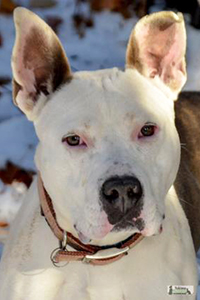 Though he’s no longer at the shelter, Batman’s presence there had a lasting effect that will impact dogs like him who end up there in the future. Nicole says it broke her heart to see Batman having to walk back and forth in the yard, knowing that if any dog needed room to spread his wings, it was him.

“We knew this situation wasn’t ideal for him,” she says. “He and every dog deserve a safe place to run and play, and just be dogs.”

Inspired by Batman and other dogs like him, the Yakima Humane Society is working on plans to build a fenced dog yard. Soon the dogs in its shelter will have the space and freedom to stretch their legs.

Space to romp and run is probably one of the best Valentine’s Day gifts for dogs. But the very best, of course, is a happy, healthy life with a loving family. And right now, many, many more dogs (and cats) are getting the same gift.

That’s making it look like it will be a happy Valentine’s Day indeed.