Best gift ever for an orphaned kitten with megaesophagus

Image
For his first birthday, Nino got the best gift possible: a home, and his family.
By Sarah Thornton

As a young kitten, Nino (then Raisin) was often sick. He was the slowest eater among his siblings, but shortly after a meal he’d throw it all back up. He was losing weight at a time when he should have been constantly gaining and growing, and he should have had energy to spare for playing and learning about the world.

It turned out he had megaesophagus, a condition that caused his esophagus to be dilated and unable to contract, making it difficult to keep food down. His foster family adjusted his mealtime routine, carefully syringe-feeding him and then holding him afterward for half an hour. Finally, he started gaining weight. In order to give Nino easy access to the regular veterinary care he still needed, he was moved from his foster home near Salt Lake City to another one five hours south in Kanab, Utah, near Best Friends Animal Sanctuary.

Then, for his first birthday Nino got the best gift possible. His original foster family ― the people who had found him, discovered his condition and helped him through the most difficult of his early days ― was coming to adopt him and bring him home for good. And even better, he would be joining his brother and sister, who the couple also adopted. 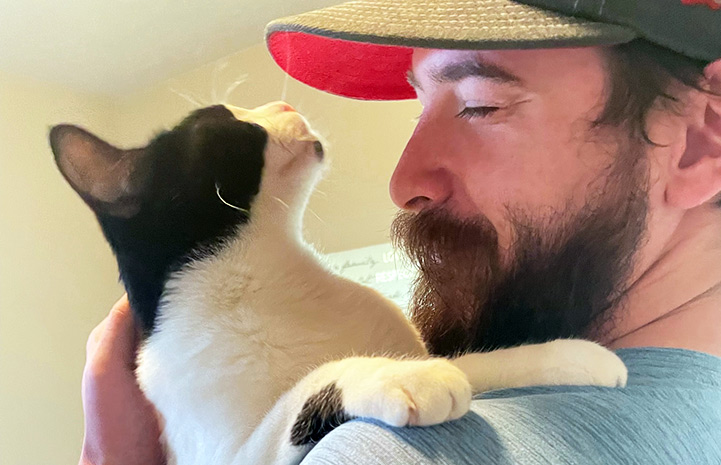 Discovering a kitten and his condition

One cold autumn day a year earlier, Max and Brittany Harnicher found Nino and his two siblings under their deck and immediately called around looking for help. They were told to leave the kittens where they were and keep an eye out in case their mother returned, but she never did. So, with help from animal control, the kittens were brought to Best Friends in Utah (Salt Lake City) for checkups and vaccinations while the Harnichers signed up to be their foster family.

It was Max’s first time caring for cats, while Brittany’s family had cats while she was growing up. But fostering orphaned kittens was new to both of them. It was a learning experience and they sometimes found themselves wondering what was or wasn’t normal kitten behavior. But when they noticed Nino’s slow eating, regurgitation and weight loss, they knew something wasn’t right.

After being diagnosed with megaesophagus, mealtimes changed for Nino. He needed to be kept upright both while eating and for some time afterward to make sure the food all made it to his stomach. Brittany and Max had him sitting with his front paws up on their hands for syringe-feeding, and then they held him for 30 minutes after he was done. Finally, he gained weight, but he still needed regular veterinary checkups to monitor his condition. So, with Nino’s health a top priority, Max and Brittany said goodbye so he could move down to the Sanctuary, where he’d have easy access to the Best Friends Clinic. But the Harnichers’ story with the little black-and-white kitten wasn’t over yet. 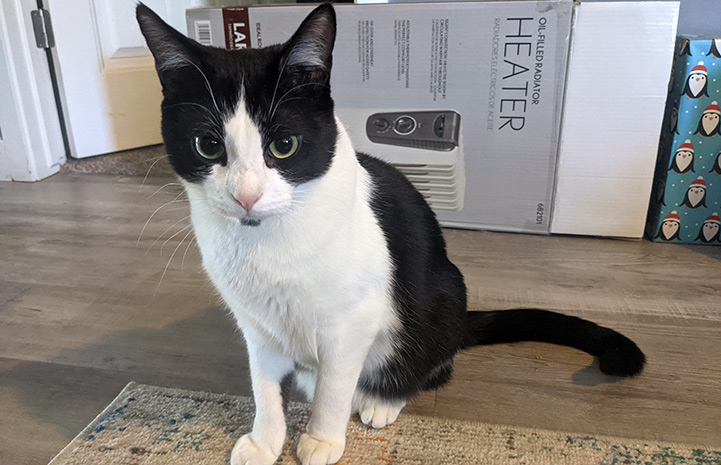 From the moment they laid eyes on the trio of mewing kittens, Brittany and Max had fallen in love. It didn’t take long for them to decide that they’d be adopting at least one of the siblings after their time as a foster family. “When we first got them,” Max says, “it was like … OK, we’ve never had any cats. Alright, we’ll foster them for now … That’s fine. Then, eventually, we thought, well, maybe we can keep one of them, and then … well, they need a friend.”

That’s how they ended up adopting the two siblings who were still with them — Thor and Ruth (short for Thurgood Marshall and Ruth Bader Ginsburg). “They’re nice, proper cats,” explains Max, “so they needed adult, proper names.”

They learned so much while fostering (and then even more after adopting Thor and Ruth) that they were confident in being able to give Nino the special care for his megaesophagus, as well as all the love he could ever want.

Meanwhile, Nino was doing well in his Kanab foster home. His family had built him a feeding stand, which he continued to use after he moved into the Sanctuary. He was on medication to help prevent regurgitation and hadn’t had any issues for a while. He was feisty and playful, always trying to get his adult roommates to play with him. He was just waiting for a home to call his own, and that’s exactly what he got when Brittany and Max brought him home again.

When they brought Nino back to where it all started, he first went into hiding, but soon seemed to realize where he was and who he was with ― his home and his family. And then his confidence came right back. “He definitely is the boss,” says Brittany with a laugh. 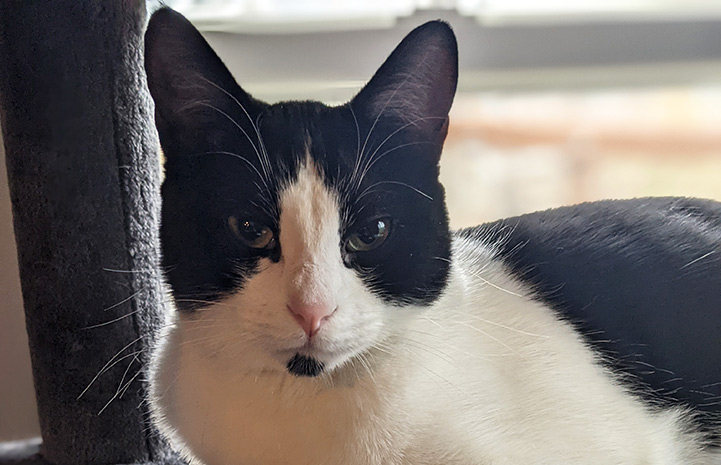 He joined the family naming theme (Nino being short for Antonin Scalia) and set to work letting his siblings know that he wasn’t the sick little kitten he used to be. Soon, he and Ruth were tumbling through the house play-wrestling, while Thor, shyest of the bunch, watched from a comfortable distance.

“He’s definitely the bravest,” Max says. “When we have people over, the others will dart under the bed, but we can have several people over and Nino will just kind of lie there for the most part.”

“Or (he will) try to steal their food,” Brittany adds, “as we’ve recently found out.” Of course, they’re sure to be careful he doesn’t chow down on anything he isn’t supposed to that would prevent him from swallowing. But being the persistent cat that he is, he tries and tries again, regardless.

[Pets adopted from Best Friends: Where are they now?]

When they’re not playing (or trying to steal food), Nino and his siblings love spending time staring out the window into their backyard, watching the birds at the birdfeeder with rapt attention. Sometimes, they even visit the great outdoors by going out on harnesses with Brittany and Max. And soon, Max says, they’ll be able to get as much fresh air as they want once they eventually have access to their new catio ― another gift Nino will surely love.

Nino is doing better all the time. He’s a healthy young cat with energy to spare and lots of love to give. He still has his feeding stand, and all of his siblings use it. It’s even benefitting Ruth, who’s had a milder issue with keeping food down.

Max says when Nino was first diagnosed it seemed impossible that he could be cared for while he was so little. But they did everything possible and helped him through the worst of it. And now, they’re seeing him through the best of it — happy, bright and having received the best birthday gift a cat could ask for. 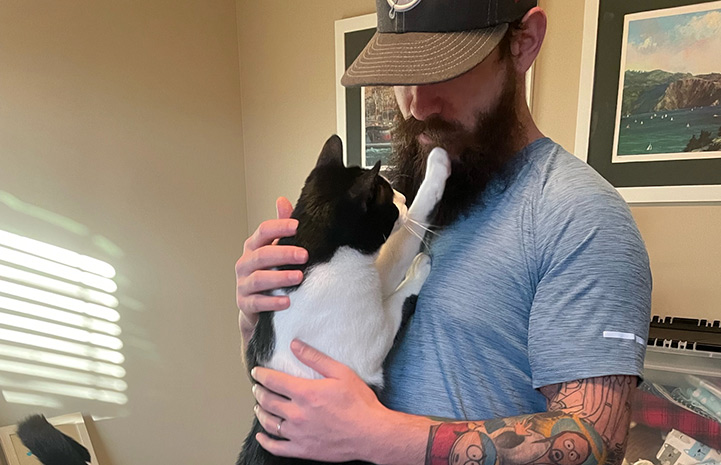 Give a pet the best gift ever

It doesn’t have to be their birthday – any day of the year is perfect for giving pets homes to call their own.

Declawed cat gets surgery for sore feet, then a new home

Photos by Molly Wald and courtesy of Max and Brittany Harnicher