Blind puppy learns how to navigate his world

Willie may not be able to see, but with help from his foster family, he can tackle any obstacle (except maybe going downstairs).
By Sarah Thornton

The world is a big, strange place for any puppy. There is so much to investigate: interesting new smells to sniff, tastes to try and strange sounds to take in. And though being born blind makes Willie's world a tad more mysterious, it's never diminished his wonder and excitement at discovering every little bit of it. He's just needed his foster family to help guide him. 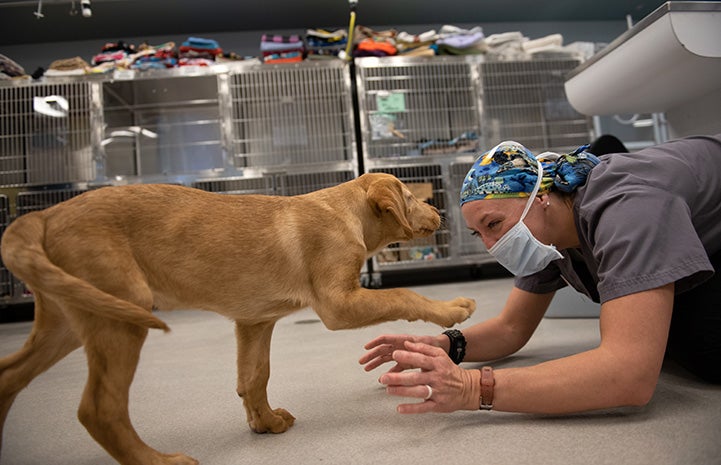 Building up a blind puppy’s confidence

Willie and his siblings were brought into a shelter when they were very small, around six weeks old and barely weaned from their mom. It was a difficult adjustment, made even tougher for a pup who couldn’t see what was going on around him. It was clear very quickly that a shelter environment wouldn’t work for Willie. And with his eyes in rough shape, he also needed more medical care than the shelter was equipped to provide. So, he was brought to Best Friends Animal Sanctuary and went into foster care with Carmella Hoeft, team lead and surgery supervisor at Best Friends Animal Clinic.

When it was time for his neuter surgery, the team removed Willie's right eye, which was in the worst condition. “I wanted to give him the benefit of the doubt to see if antibiotics would help his one better eye and maybe determine if he could see any shadows in the left eye," Carmella explains.

At first Willie was quiet while he got used to his new surroundings, but Carmella says it didn’t take long before he was up, moving and getting into all the usual puppy shenanigans. 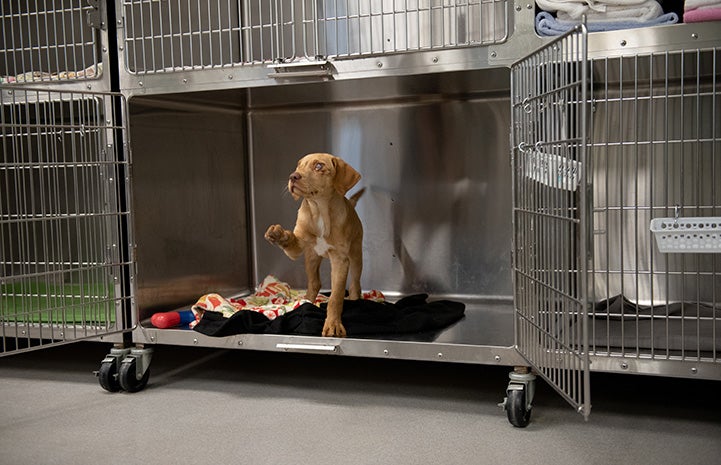 Getting Willie into a comfortable routine built up his confidence and he learned what to expect at any given time. Waking up at 5 o’clock in the morning, Carmella would carry him down the steps into the backyard where he could do his business and then follow her around for a while. She discovered that if she gave him some sounds to track (snapping fingers, a crinkling bag or anything else that made noise), he could trot right along after her.

He was quickly figuring out the layout of his new territory. “He learned that from the gravel we would walk onto the rug,” says Carmella, “and then from the rug it would be five of his steps, and he’d take a right-hand turn and go up our three little porch stairs.”

After that, going up the stairs was a piece of cake, and it seemed to be exactly what he expected in return for his clever maneuvering. “As soon as he went up the steps and got in the house, he would whip around so fast and stick his muzzle in the air because he was waiting for a treat,” she says. “It was the cutest thing. That melted my heart. It was so sweet. He knew if he could make it up those steps and get in the house by himself, then he was gonna get a treat.”

With snapping fingers guiding him, Willie also had little trouble climbing into Carmella’s car ― which thankfully for him was low to the ground ― and riding with her to work. He hung out at the clinic every day, making friends with other pets and being fawned over by veterinary staff who simply couldn’t resist his adorable little face.

Willie’s confidence grew as fast as his body, and before long there was nothing holding him back except for the trepidation of the unknown when faced with going downstairs. He had to build himself up to stepping down out of his kennel at the clinic, though it was only a four-inch step. Carmella says: “It took a lot of self-reassurance on his part to figure out where to put his front paws to get out. That was a huge milestone.”

Carmella's biggest challenge with Willie was managing his desire to chew on everything he could find. “He was pretty strong-headed when it came to his chewing on things,” she says. “I don’t know if it was just his teething that he was going through ... (or) it could have been his way to figure out what he was dealing with.”

[Fostering dogs is a family affair]

But beyond his mouthy explorations, all Willie wanted to do was make friends. “If people were walking near us, he would, by auditory cues, find where these people were and burst into excitement when he actually, finally touched them,” Carmella says with a smile in her voice. “It was a really neat thing to see him track these people with his ears and then get totally elated when he actually physically got to the person. And it was typical, uber-excited Labrador behavior: total body wags.” 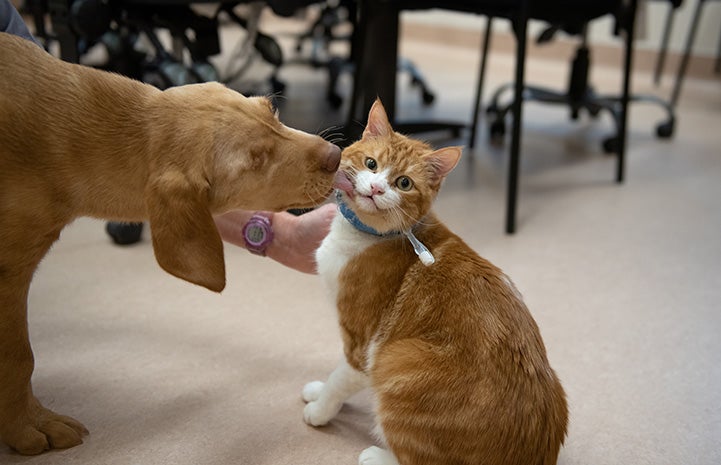 With Willie’s confidence at its peak and his health in good condition, it was time to start looking forward to the next chapter of his life: finding a family of his very own. So that he could be seen by even more people and have every chance at getting adopted quickly, he would be moving again ― this time to a Best Friends network partner in Los Angeles, I Stand With My Pack.

After Willie was back on his paws from a second surgery to remove his other eye, I Stand With My Pack got to work looking for a place for him to call home. And, in the meantime, Willie met his second great teacher and foster person: Rocky Kanaka.

Rocky had lots of experience working with blind dogs (including his own) and was confident he could help Willie. “I was ready to give him safe harbor for a while until he was really comfortable since he’s a puppy, and then start small with some training things and help him navigate his world,” Rocky says. “But what was interesting with Willie, which I haven’t run into with a blind dog before, is that he is fearless.”

There was not an ounce of hesitation in Willie, despite being unable to see the world around him. “He would jump off ledges,” explains Rocky with amusement, “(He would) be the first to jump in a pool or a bath, or explore anything at any time, day or night.”

They dove right into Willie’s training. Rocky worked with Willie through his mouthiness and used the finger-snap following Willie had learned from Carmella to teach him how to heel. That way, Willie could stick close while they were out on walks. And when Rocky found that Willie was protective of his food, he knew just what to do.

“From what I’ve seen,” says Rocky, “it is very common with blind dogs. And fair enough: If I couldn’t see and someone grabbed my bowl of food, I’d probably throw a fit.” By hand-feeding, changing up meal locations, and gentle petting and touching while Willie was eating, Rocky helped the young pup understand that there was nothing to be afraid of. He would still get his food, no one would take it away and eating together was a fun thing.

Rocky documented his time with Willie and promoted him for adoption on his blog and YouTube channel. Willie was also on cardboard cutouts and flyers, and a plane flew an adoption link banner above the beach and pier. Rocky was going to make sure this special little pup found himself a home. 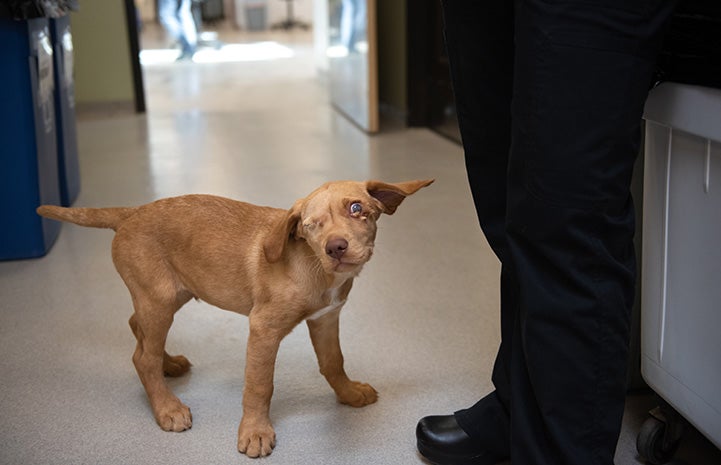 Finally, after Willie’s name and face had been spread just about as far and wide as possible, promotions by Rocky and I Stand With My Pack reached just the right person. Savanah had experience with blind mini horses from running a mini horse rescue, and she also had a fluffy herding dog, Carson, who hit it off immediately with Willie. “She was just perfect,” Rocky says. “It just couldn’t have been a better situation for Willie, and it’s something he really deserved.”

The two dogs now share an Instagram account curated by their more tech-savvy human family members, where all their loyal fans can keep up with life on the farm. Willie’s got room to roam and enough new sounds and smells to keep him busy for a long, long time to come. His foster families helped him learn to navigate his world, and now there’s no stopping him.

“I think the neat thing about Willie, the life lesson he has to give, is his condition did not slow him down for a minute,” Rocky says. “He was happy and joyful and living in the moment and excited to explore. He was fearless … It was neat getting to be a chapter in his book, and now he’s doing so fantastic, I couldn’t be happier. What a great situation for Willie.”

Help a pet on their way to a home

Fostering pets like Willie can help them gain confidence and find their footing. Plus, you get a fluffy friend out of it. It’s a win-win!