Little Lion Foundation gets help in building financial sustainability to save more kittens.
By John Polis

When mathematician and meteorologist Edward Norton Lorenz suggested, somewhat metaphorically, some 50 years ago that the flapping of a butterfly’s wings could cause a tornado, it’s doubtful his “butterfly effect theory” had anything to do with a helpless, tiny, three-week-old kitten named Owen. But when the gray-and-white “little lion” quite unexpectedly became the face of an upstart Southern California kitten rescue organization, the concept of small changes yielding large consequences became very real indeed.

“Owen changed the face of everything we do with kittens,” says Claudia Otis, CEO of the Little Lion Foundation, which rescues kittens in Long Beach, California. Mistakenly vaccinated at three weeks old, Owen arrived at Little Lion fighting for his life. He was blind and battling numerous health issues. “He was hit with just about everything that we have to deal with when it comes to our kittens.”

Though Owen received treatment and his health improved, he eventually was stricken with feline infectious peritonitis (FIP) and didn’t survive. But Owen’s story continued to resonate with the volunteers and supporters of Little Lion Foundation and, Claudia says, it has motivated her group to achieve success. But success also brings new challenges, and with the number of kitty arrivals at Little Lion surging post-pandemic from 350 per year to more than 1,000 per year, the need for change came front and center. 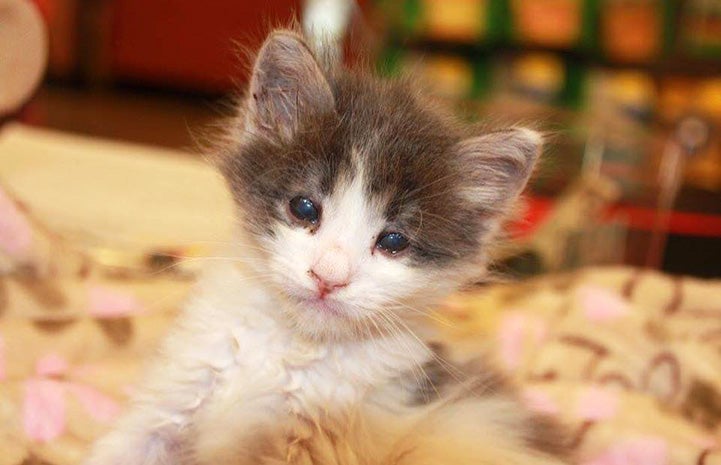 Founded in 2016, Little Lion has saved cats and kittens in Long Beach through its trap-neuter-vaccinate-return programs, foster and adoption, and an extensive community wellness program. It provides free preventative care (microchips and flea medication) for cats of community members who can’t afford it, and it has taken the program on the road to serve surrounding communities.

With the pressures of a national pandemic and surging intakes weighing heavily on Little Lion in 2021, Claudia knew it was time to make some changes. So, she contacted Best Friends Animal Society for help. “I knew about Best Friends and the great work they do,” she says. “I attended their cat lifesaving summit, so I knew they might be able to help us.”

[Animal stories to fill you with hope]

Helping the common causes of other animal welfare organizations has always been part of the DNA of Best Friends Animal Society, which includes a history of having Best Friends staff members work alongside shelter workers to share knowledge and best practices. When Claudia called, the Best Friends national embed team (with its track record of working on community cat projects around the country) was ready to help. 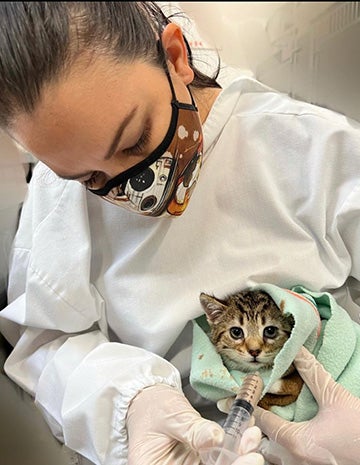 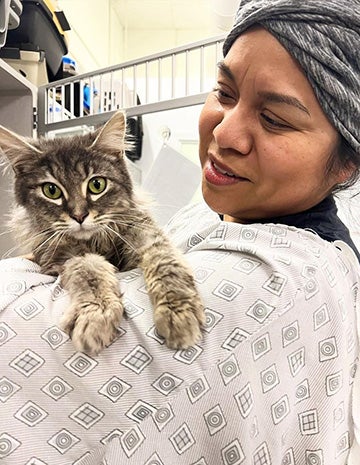 “With the embed program, we’ve discovered we can make a difference and that it’s most impactful to have our people working hand in hand with other organizations to help them be more successful,” says Trish Tolbert, the embed team’s senior development strategist.

While the lifesaving part of the national embed program receives the most attention, the program reaches across all of Best Friends to include critical support services functions that support lifesaving ― such items as community engagement, stewardship, websites, rebranding, community awareness and, yes, fundraising.

Claudia says a key factor in contacting Best Friends was an opportunity to double her existing space. “With the bigger space, we have larger overhead, our lease payment doubled, and utilities and transportation (costs) are up. We’re talking about $60,000 a year in new overhead costs, plus our annual costs of about $275,000 for kitten care.”

The challenges faced by Little Lion are typical of a growing organization, says Trish. “Many of our partners are out there trying to save lives with duct tape and hope, and it requires and all-hands-on-deck approach just for the lifesaving. They would never pass up the opportunity to save a life, which often leaves them little time for creating a budget or working on long-term fundraising. So, we began to help Claudia think about diversifying her funding base, so that she would have a broader base of support moving forward.”

At the embed team’s request, the Best Friends foundations and major gifts teams are involved to help Claudia learn more about presenting her organization’s work to potential donors, including preparing budgets in ways that donors can understand. 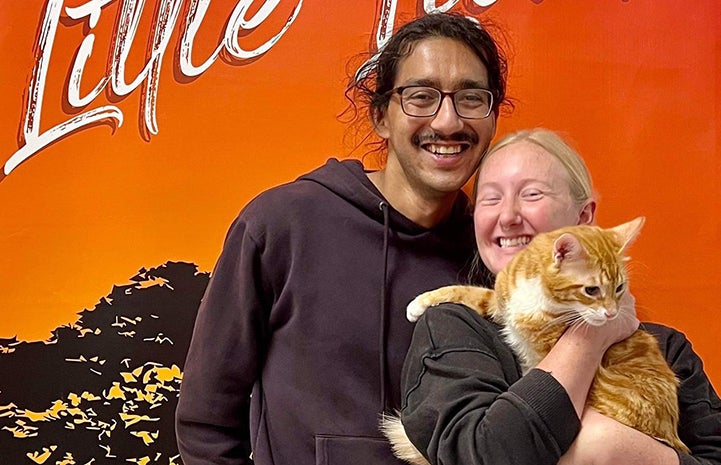 Raising funds to save kittens

One of the keys to fundraising success, Trish says, is learning the skill of packaging a budget around such items as superior medical care, fostering and the need for equipment. “A well-planned budget helps an organization tell its story. It’s extremely important to know how to write and talk about a donation opportunity and its potential impact.”

[Dog had more energy than she could handle, until she met her new family]

Creative management of existing resources and being creative in raising them can be a big help to organizations in transition. For example, restocking supplies through donations from Amazon, Walmart or Chewy wish lists is tried-and-true method used by Best Friends and other organizations to fill important needs.

Expecting hardworking CEOs totally consumed with lifesaving to suddenly develop a fundraising skill set is a lot to ask. But when planning for the future (much of it about finances) becomes critical, the need for change does, too.

“I’m the CEO of Little Lion,” says Claudia, “but I’m spending so much time bottle-feeding kittens. Trish explained that I’d have to step back from that for a moment and take a look at these other things.”

These days, Claudia is transforming Little Lion from a small all-volunteer operation primarily dependent on donations from Facebook and whatever they could raise from adoptions to one with a more professional approach to fundraising. The goal is to make everyday operations run smoother while ensuring a much brighter financial future.

“We’ve begun setting up our development team and our new emphasis on fundraising is already producing results,” Claudia says. “And we’re starting to see a bunch of in-kind donations come in.”

Michelle Logan, director of embed programming, says “Teaching partners to scale up and do their own fundraising is an important part of our work.”

Best Friends funding is available to help with some urgent needs of embed partner organizations to make it easier for them to implement new ideas but helping them raise more funds on their own makes a big difference in the long run.

Says Michelle: “For example, if an organization relies on income from adoptions, we can augment them financially so that they can drop adoption fees while still placing animals. That allows them to still have revenue coming in while growing their fundraising, diversifying that revenue and reducing the reliance on adoption fees, which often is a barrier to animals going to great homes.”

[North Dakota shelter steps up to help others]

Best Friends’ ongoing work with other organizations has been heightened in recent years through its leadership of a collective movement to end the killing of dogs and cats in America’s shelters by 2025. “We know that no single organization can do it alone,” says Michelle, "so we are working with many agencies to share our resources and expertise to help individual communities achieve no-kill status.” 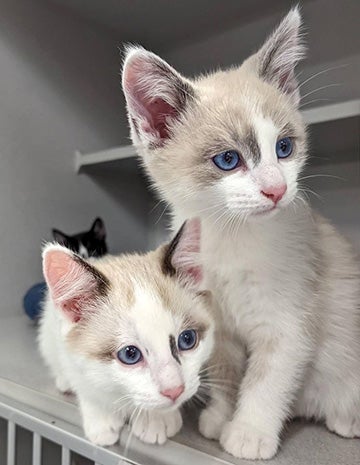 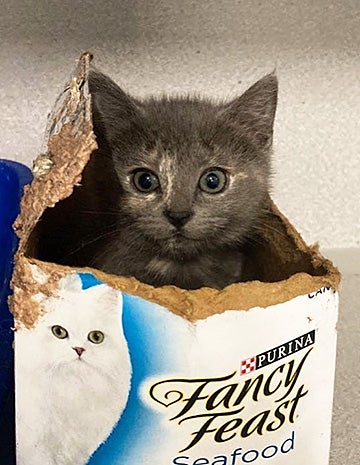 How does Claudia plan to utilize increased funding? “Just expand our kitten care,” she says. “It’s about fosters and funds. Providing fosters with everything they need to take in kittens and having more of a budget to work with respect to our everyday animal care costs.”

It’s also about having more funds to handle cases like Owen’s, she says. “One of our biggest costs is trauma kittens coming to us with serious medical issues. For example, if a kitten comes in needing a leg amputation, it’s $1,600 for the surgery. And for an enucleation (eye removal) it’s $1,000. And then when you think about general vet care, it’s $125 to $160 for spay/neuter surgeries.”

Claudia plans to showcase her “new look” Little Lion Foundation with a grand reopening celebration in late April. “We will be using it as an opportunity to invite potential donors and emphasize stewardship with our current donors. We are also celebrating those organizations and groups of people that have been helping us with our 'donor wall' in our expanded space.”

Claudia and Little Lion are clearly pointed toward the future, but she can’t help thinking back to the beginning and recalling memories of little Owen. “There’s not a day that goes by that I’m not reminded of him and how he changed the way we look at things,” she says.

“And I so appreciate Best Friends, which has always been so willing to share information, to educate and to partner. That’s what our organization is about, too. We want to be part of the solution to save lives.” 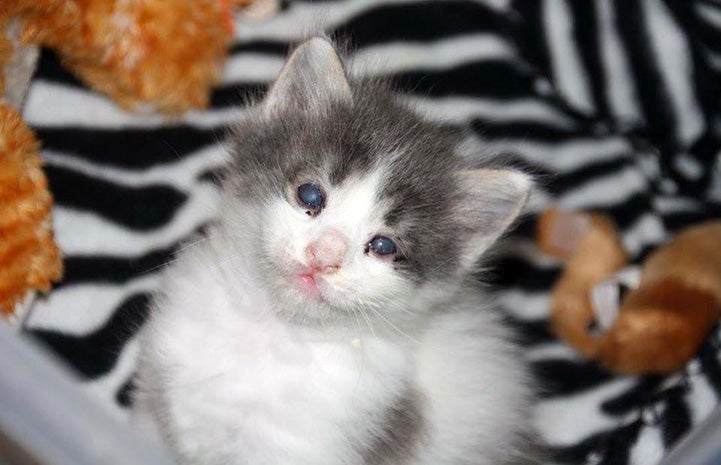 Prison program, trainers put adoption in the stars for a spirited dog

Bunny with head tilt gets second chance at Best Friends